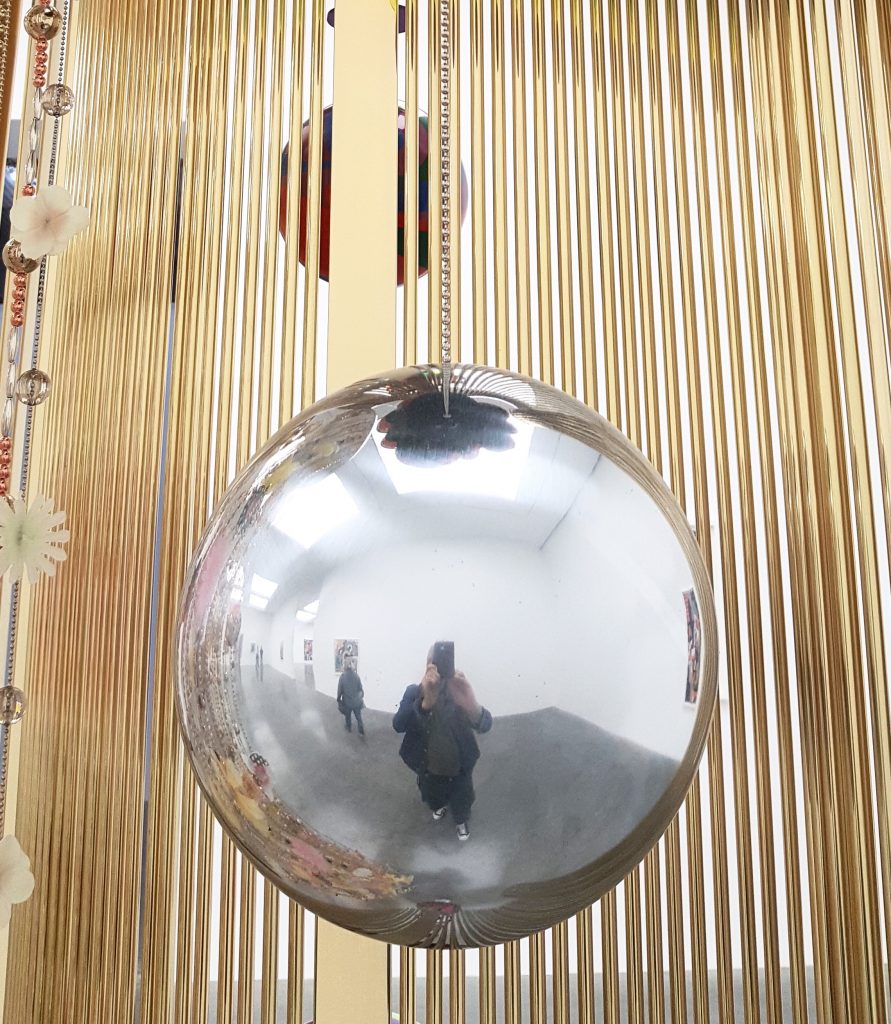 The work of Beatriz Milhazes eludes classification. To align her too closely with a certain strain of modernist abstraction, or with the postmodernism that rehashes its tropes, is to miss far more interesting and complex visual and historical connections. There are other things to consider, besides, say, comparisons between her paint application and that of Hans Hofmann: there is the degree to which she has been influenced by the painterly possibilities of faded tiling on Brazilian Baroque churches, or the peeling paint on the rotting porticos and colonnades in the old colonial buildings of Rio de Janeiro. There is, to give a further example, also the matter of her long-held fascination with the modernist landscape architect Roberto Burle Marx, whose re-imaginings of the idea of truly public spaces and parks speak of an egalitarian modernist sensibility that seeks to reconnect man with nature: rather than importing colonial horticulture from more temperate climes, he put Brazil’s rampant and beautiful tropical vegetation centre stage. All of this is present in Milhazes’ paintings, collages, and three-dimensional works. 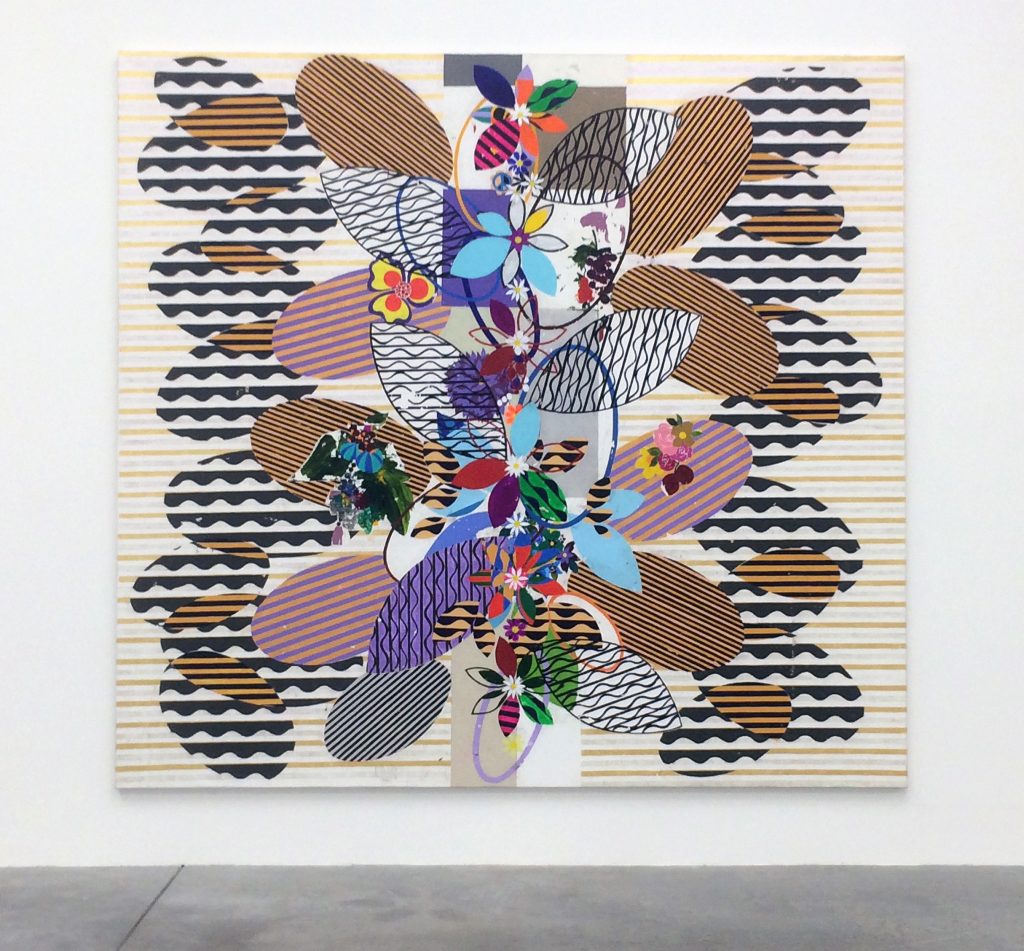 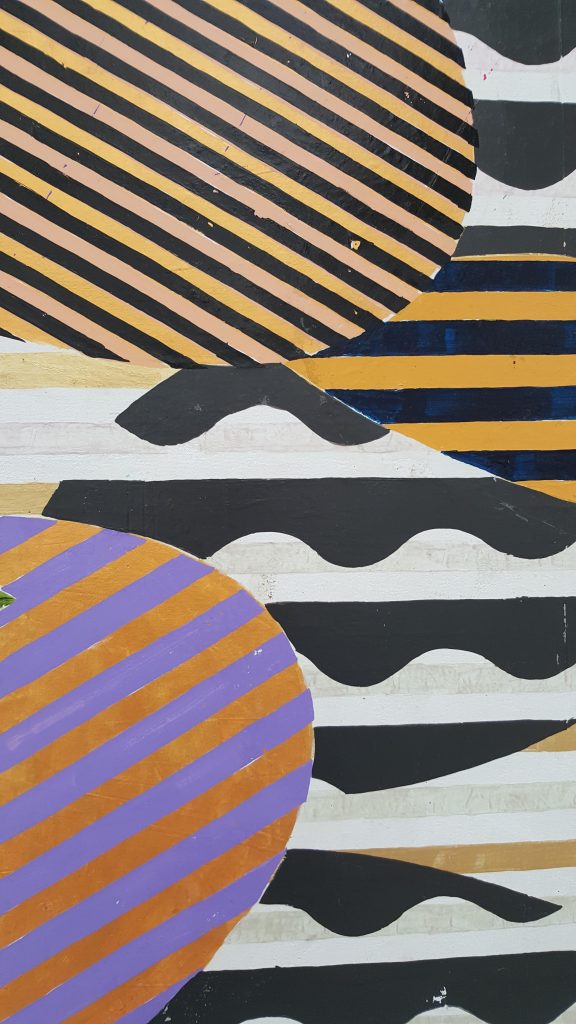 Milhazes helps herself to whatever she requires from the modernist canon: Matisse’s Moroccan period of 1912-13, during which his use of repeated decorative motifs inspired by Islamic textiles allowed him to explore colour on its own terms, testing its spatial and emotive possibilities, is an unmistakable point of reference for the works hanging at White Cube; as are later modernist explorations of colour found in Systems and Op art, that particularised the power of colour released  through pattern and dynamic contrasts ; but Milhazes plays with how these modernist innovations are mediated by other kinds of cultural experience and historical contexts. In doing so, she deploys a kind of irony: not the cold kind, born of the nihilism of the postmodernist sensibility, but a ‘hot’ irony, implicit in the emotional charge of her elaborate collagic procedures. Its heat can be felt throughout the history of modernism, wherever the supposed high and low forms of cultural production have clashed; and it is felt with a particular intensity where visual cultures from non-Western centres collide and meld with notions of abstraction which are viewed as originating in Western modernity. Where exactly does it come from, this ‘hot’, and, I would argue, creative irony?

Maybe it finds its origin in the contradictory purposes at the roots of modernity. The European mission to modernise has been proven to be a complex and contested process: clearing away the old, superstitious, primitive world for a clean, logical and productive one has, time and again, turned out to be a deeply flawed enterprise. Grand ideas about progress have always been tainted by political and economic expediency, and have had complex, unpredictable consequences for the societies in which they have been put into practice. It is necessary to recognize that in a global context, aspects of this project are linked to empire and the extension of colonial rule just as much as they are to linked to reform and revolution. Beneath the camouflage of ‘progressive’ thought hides Europe’s drive towards absolute power, through expansionism, the acquisition of natural resources, and the enslavement or destruction of subject populations; this is the shadow self of the Enlightenment, and glimpses of it can be seen in the paternalistic fantasies of the ‘other’, the primitive and the primordial, projected onto non-European peoples by their oppressors, that have guided so much of the trajectory of modernist art. Milhazes’ ‘hot’ irony can be understood as her chosen mode of working both with and against the legacy that modernism has foisted on post-colonial Brazil: she is simultaneously both critical and celebratory. The irony lies in the way in which she repurposes the visual tropes of European modernism to evoke a particularly Brazilian brand of cosmopolitanism; and the heat comes from the friction created as these tropes jostle together in her crowded, layered, polychromatic images. 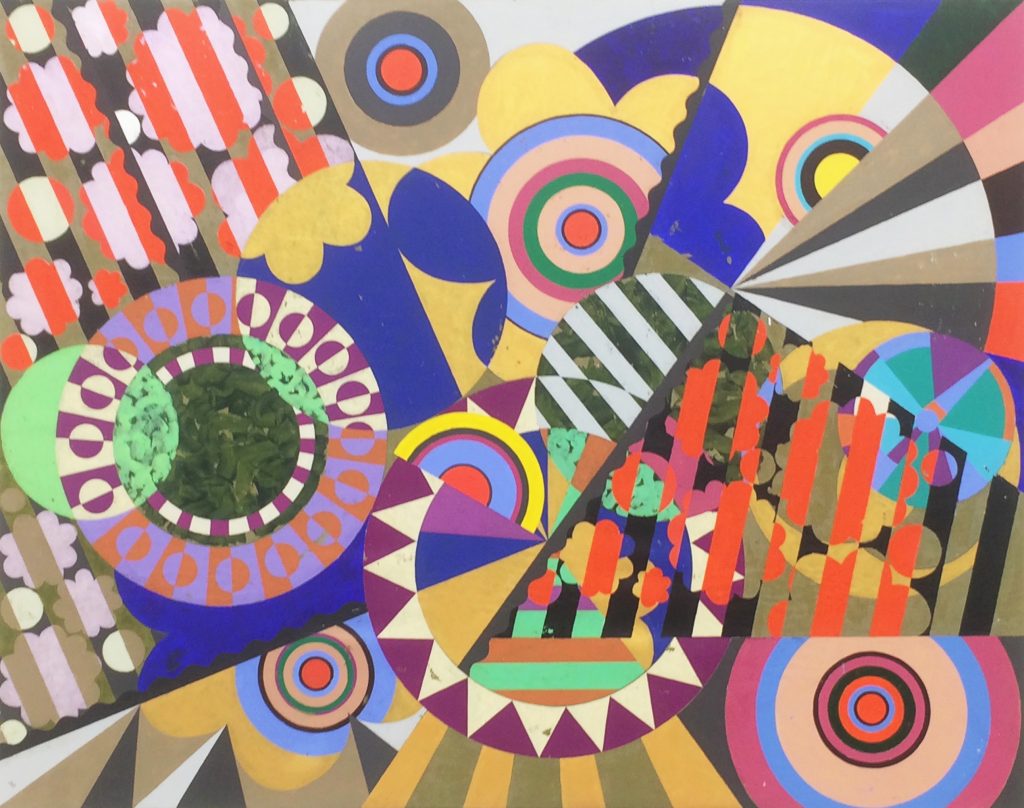 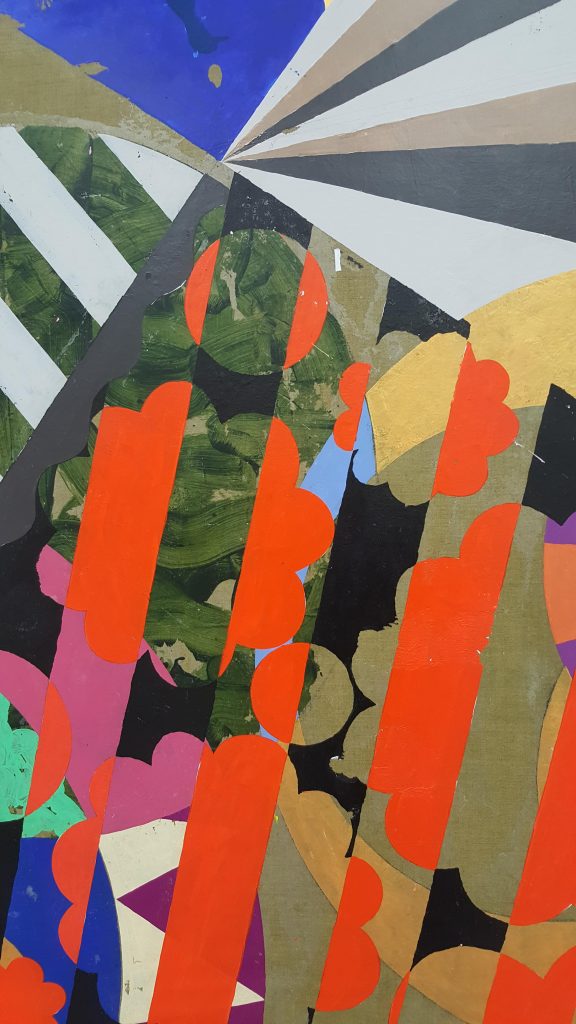 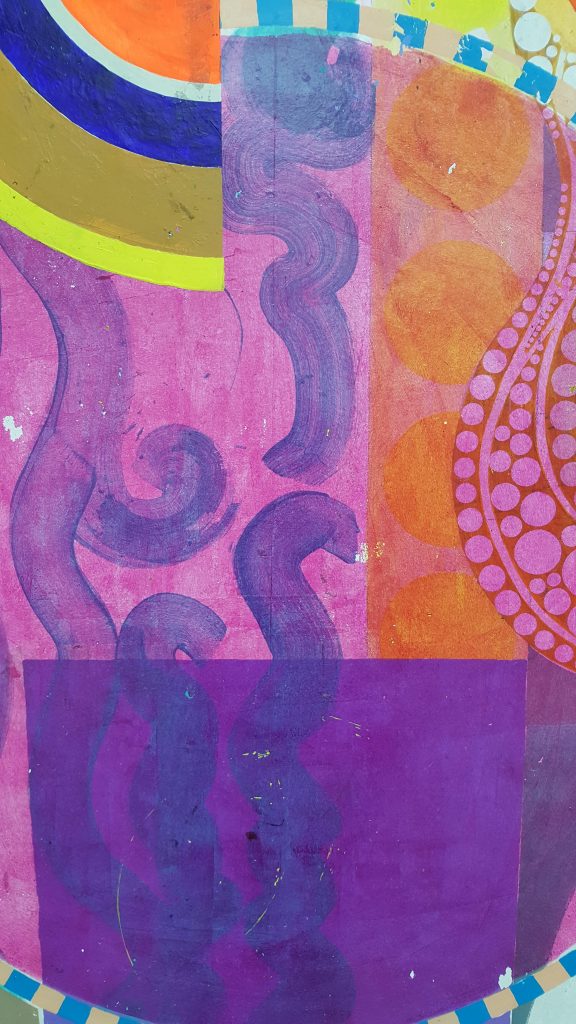 The paintings’ eviscerated surfaces are worked up in an elaborate play between additions and subtractions of transferred painted imagery. Frankenstein-like transplantations of ripe and flowering horticultural imagery are layered over architectural forms and painterly devices derived from modernist iconography. The distressed surfaces might seem overworked and over-engineered: but on the other hand, had she chosen ‘wet into wet’ spontaneity, that too has its limitations; and her careful layering of imagery has its own peculiar painterly intensities. Milhazes considers the history of the mark-making process, the natural incompleteness, and the accidental slippages and breakages of the transfer process as absolutely integral to the final painterly image. Despite the apparent exuberance of her work, the allegorical connotations that attach themselves to a painting process heavy with broken surfaces seem to suggest that her use of bright colour and dense physicality has, in fact, a melancholic undertow: one is reminded of the processes of decay, as burgeoning nature slowly but relentlessly grows into the weathered cracks of seemingly endless modernist concrete facades. This kind of irony casts a strange, revealing light on the nature of progress and tradition: what were once seen as emblems of cutting-edge modernity are now recast as symbols in a kind of painterly drama of entropic decline. Milhazes brings back Sonya Delaunay’s dynamic discs from the turn of the 20th century, and Bridget Riley’s cool, crisp, optimistic rhythms from the 1960s; but in her re-imaginings, these tropes begin to buckle and fragment under the weight of their own histories- freighted as they are with the unrealised hopes for a more egalitarian world, and with the longing for a new kind of visual culture that might just as easily be born of modern city street lights, shop fronts, modern architecture and design, rather than the grand Western Tradition. 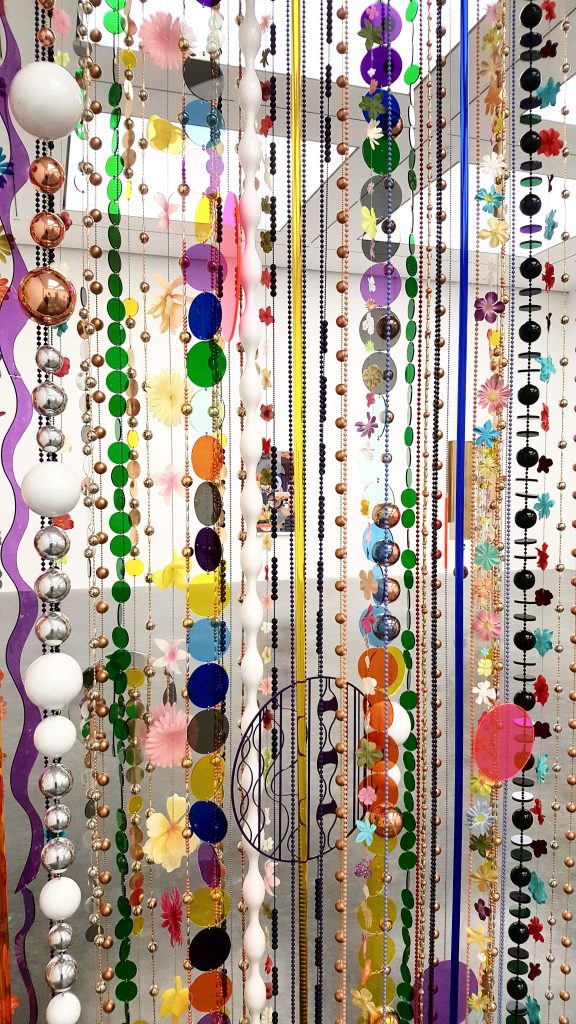 The paintings in the show work in one way: the collages and three-dimensional pieces, in another. The elaborate cascades of beads, baubles, imitation flowers and jewel-like fragments that pour down in the chandelier-like forms that hang in the 9x9x9 space suggest a joyous celebration of kitsch; but it’s kitsch mediated by highly sophisticated colourplay and sheer complexity in the elaboration of forms, and in their highly polished finish. Again, though, is all what it seems? These high production values are echoed in the first part of the South gallery by the high-end shopping references that call out from the stunning series of collages, each exquisitely crafted from the packaging of international brand named stores, each with its own unique colour signature formed from its luxurious printed materials; but in constructions and collages alike, there is a sort of sophisticated delirium at work. The collages, in particular, operate like feverish machines, maniacally reconfiguring what seems like a plethora of visual possibility, mediated by the psychologically charged colour regimes of consumer culture; but to what purpose? are they affirming, or questioning? Much has been made of Milhazes’ interest in carnival culture: but the evocation of it in her work proves to be as problematic, and as double-edged, as carnival itself has become. Carnival might once have been the anarchic, spontaneous celebration of the burgeoning energy and creativity that defied the harsh realities of city living, caught between a repressive regime and grinding poverty; but it is now widely seen as having turned into a series of highly sophisticated choreographed ‘spectacles’ staged for the tourist’s gaze. True carnival is a polyphony of competing voices, a raucous recognition of the contradictory nature of being human, in which all manner of political, religious and sexual identities are held up for scrutiny in a special kind of performative flux, a polymorphous plurality; and in all this, a cacophony of humanly-felt ironies abound. But all is silent here in the White Cube…. the earthy density, the physicality and weight of the paintings- which can be read as metaphor for the earthiness of true carnival- are conspicuously absent from the complex arrays of brightly painted objects and suspended translucent coloured shards of ornamental perspex, plastics and glass that never quite form cogent sculptural wholes. They act like elaborate curtains or veils that one might constantly peer through rather than at or into; and in their insubstantiality, they evoke the hollowed-out kitsch of the carnival show. 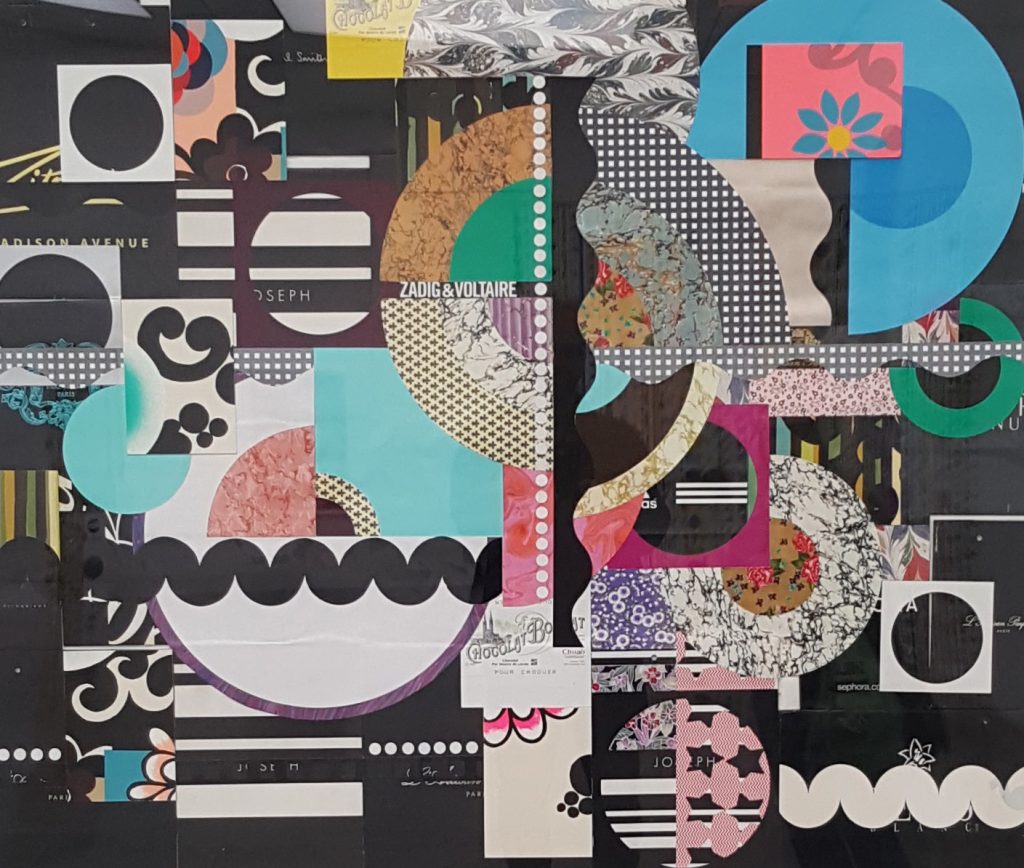 Artists who were perceived as outsiders to the western art world are now finding their place within it; and in this respect, Milhazes is a trailblazer. They use aspects of modernism’s history of forms as tools with which to dismantle it; and in doing so, I would argue, they have greatly enriched our understanding of it. And they go further: through this process, they are able to allude to the often brutal paradoxes at work in the wider culture, where the shrinking of the world to a ‘global village’, giving us access to what had been until recently fugitive or hidden visual cultures, all brought to us in high definition, up close, in slow-mo, all made possible through ever more efficient production and dissemination of images, has its dark counterpart in the movement of organized trafficking of the displaced and the dispossessed, uprooted at the whims of the new empires built on international corporate power. Again and again, Milhazes, through interfering with the signals of pure sensual enjoyment that her work seems designed to send, invites a questioning, ironical reading that extends beyond the image, and into the global culture industry of which it forms a part. And there can be no doubt that someone with her keen eye for irony, and whose work deals so subtly with the the machinations and manifold contradictions in the way we perceive contemporary abstract art, will have thought long and hard about showing it at White Cube, which functions, in effect, as an almost archetypal neoliberal cultural power broker. 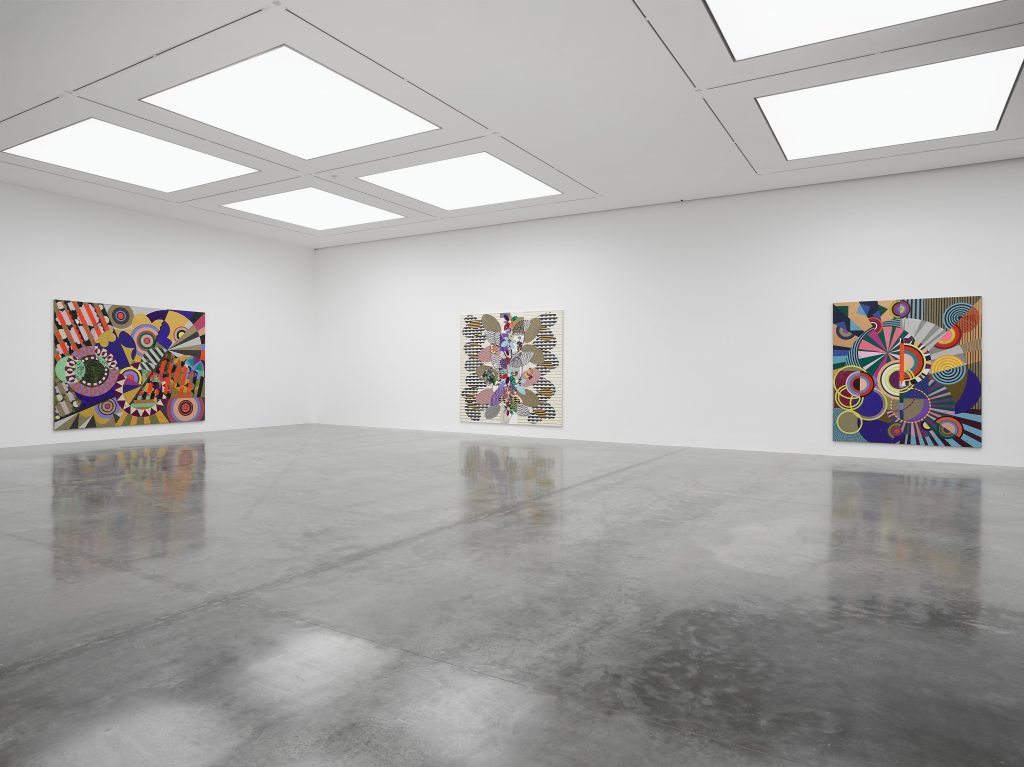 Born in the fusion, as the artist herself eloquently puts it, ‘of symbol and matter’, Milhazes’ works create a slow but insistent paradoxical burn. They seem to be goading us to let go of the idea that abstraction can provide some notion of a purely visual, unmediated transmission of universal spiritual values: the moment we abandon these untenable mythologies about the experience of looking at abstract art, they seem to suggest, the sooner we will start to enjoy it in the real sense; that is, the complex, historically and socially mediated sense. For all their decorative exuberance and tropical iconography, they smoulder with an ironical, critical heat: a heat fuelled by the contradictory narratives at the heart of the history of abstraction, that continues to sting the mind’s eye long after one has left the gallery.