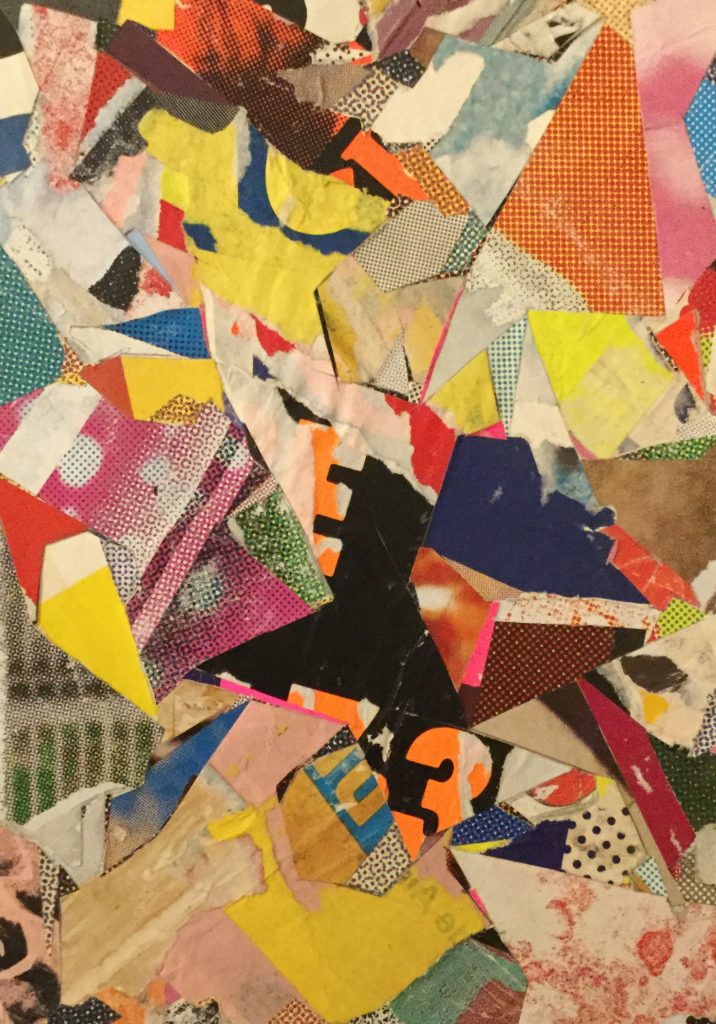 JB: What was the impetus to set up the gallery?

NC: The main driver was the lack of a space/gallery dedicated to collage. I use the term collage but under that catchall term I think assemblage, bricolage, montage can be embraced. It is one of the most important genres of twentieth-century art, taking on board those other key tropes, the readymade and the found object. Although collage predates the twentieth century, it really came into its own in that period, with the ubiquity of the photographic image in mass-circulation publications. The mass-production of consumer items also led to an abundance of exotic detritus that artists could re-interpret and reconstruct.

Another influence was ‘Turtle Salon’, an anarchic, eclectic salon of artists, filmmakers, poets and musicians founded by NY filmmaker Michael Shamberg (RIP). The only link between those that took part was their knowing Michael. I liked the fact that he included well-known people such as Derek Jarman and John Baldessari alongside others who were emerging, pupating or totally unknown, and all working in different fields. It was as much a social gathering that brought disparate groups of people together, and I like to emulate that to some extent. My first curatorial experience involved physically bringing 50 or so works from the Turtle Salon in Paris to the Hardy Tree Gallery in Kings Cross, and adding some people that I knew to the mix. 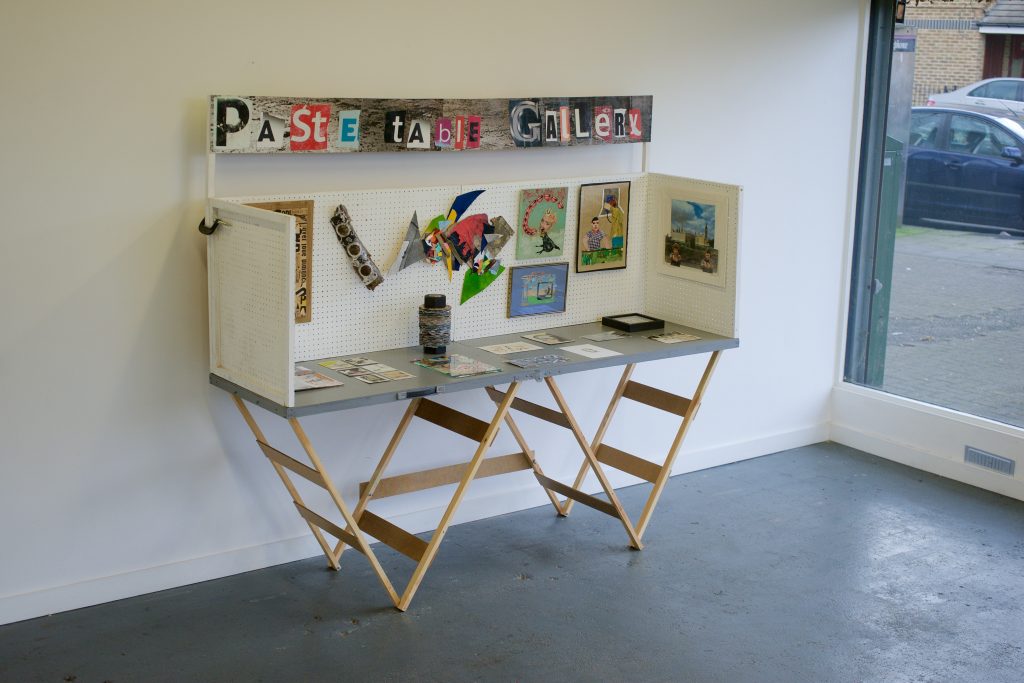 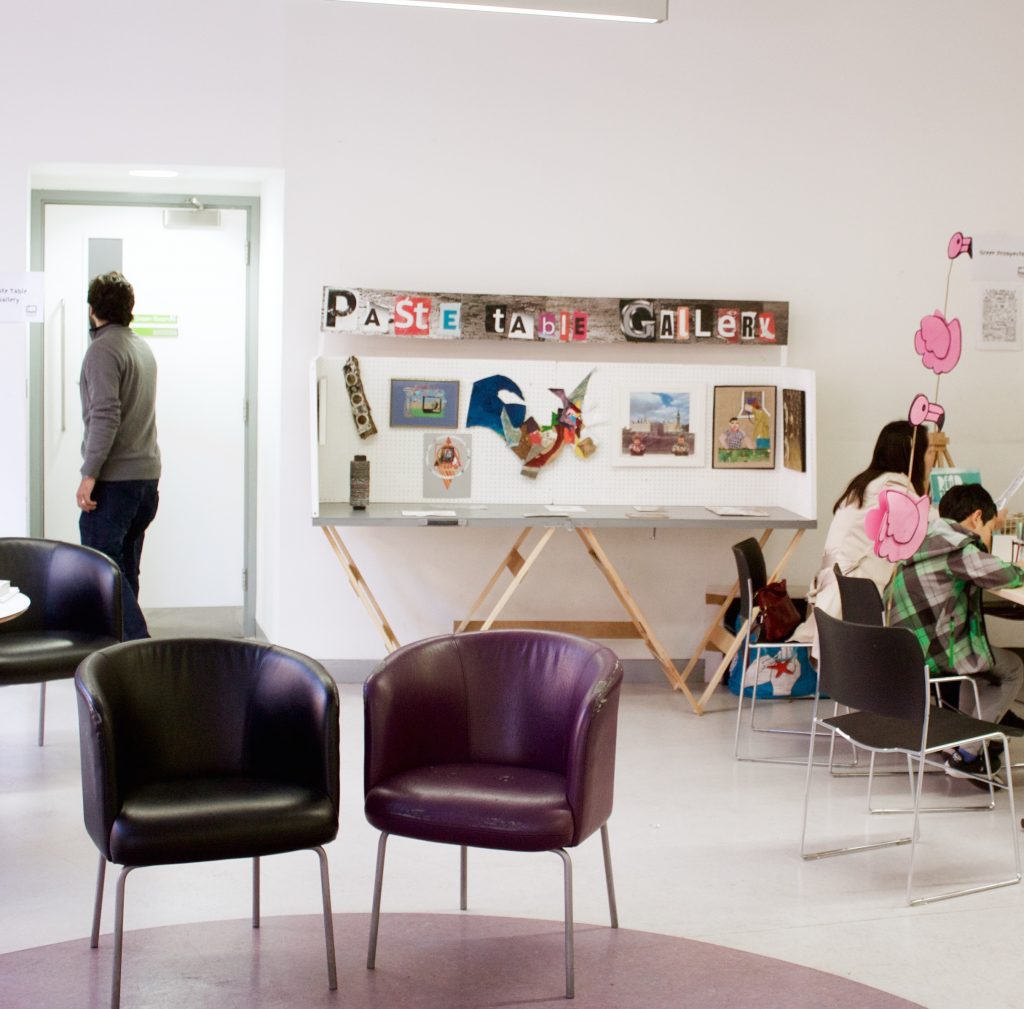 JB: What was the most challenging aspect to setting up the gallery?

NC: Actually building the gallery was relatively straightforward: nothing too clever there. The tricky part was, and is, finding places to show the table. At first it was very difficult for me to get people to entertain the idea of encroaching on art world territory, which tends to be quite a rarefied world. One person I am indebted to is Rossella Black who was very enthusiastic and gave PTG two exhibitions at Westminster Reference Library without too much persuasion. I often have 20 or more artists in an exhibition, which creates logistical challenges in meetings, in terms of reassuring artists, and arranging collection of work from them; and creating a catalogue which I do for each outing.

JB: What do you think makes Paste Table different?

NC: Physically, the obvious things are the gallery’s portability and compactness; speed of putting up and taking down an exhibition. Conceptually, the inclusion of people who are marginalised in terms of art world presence, alongside artists who are in institutions or who are represented by commercial galleries; and the focus on analogue collage. I’m not particularly interested in digital work, although I am open to be converted.

Then there’s the eclectic nature of the collage shown, from figurative narrative work, to totally abstract and 3D sculptural stuff. I have very Catholic taste and I think it is important to show the breadth of possibilities within collage; artists talking about geo- or sexual  politics, or just dealing with materiality in an exciting way. Collage is a very democratic medium, anyone can get involved; and I want to show that.

JB: What made you decide to focus on collage?

NC: Leading on from the last answer: the democratic nature of the medium is exciting to me. The fact that virtually anyone with a pair of scissors or a knife, some glue, or a few toilet rolls, can make something is wonderful. It can be very considered, detailed and painstakingly constructed; or quite ephemeral and fast. These things appeal to me personally and as a selector. Being able to see the way things are constructed, the hand of the artist in the cuts, glue marks, are all interesting to me. The game of chance is an important factor. Chance in terms of coming across an image or piece of material on the street, the aleatoric nature of juxtaposition of images or stuff.

The speed at which collage can be formulated, and the way that a fast, responsive political commentary to world events can be achieved is another interesting pull for me. 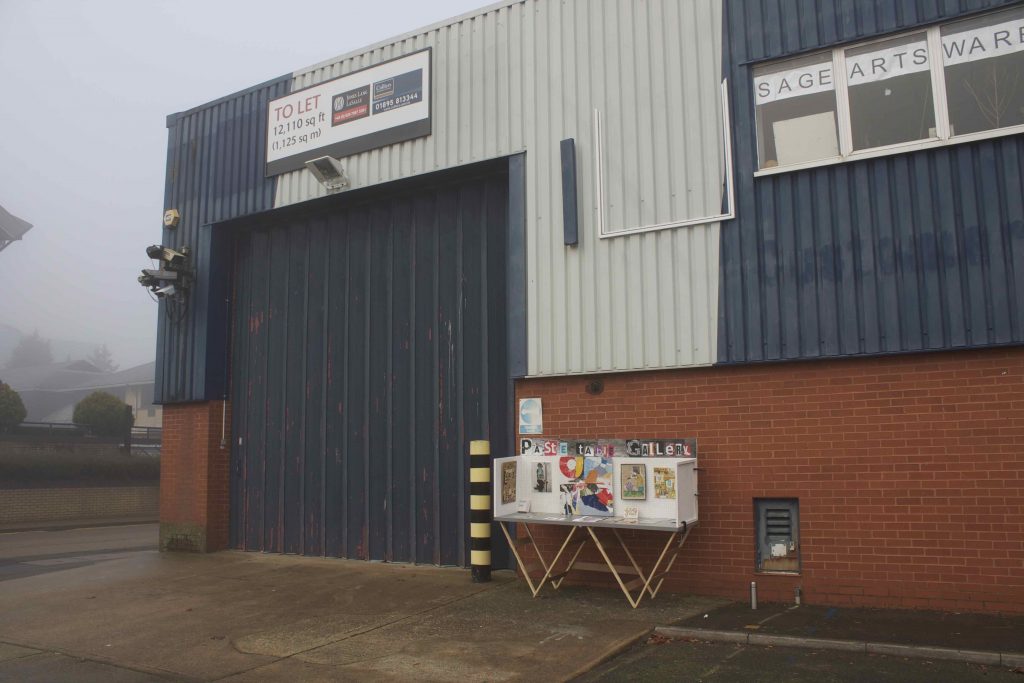 JB: What do you think about the term ‘Outsider Art’?

NC: It is a term that could be seen as patronising and it is odd that there are so called ‘Outsider’ artists that are represented by established galleries and whose work is sold for large sums. It can be quite a fluid thing: for example, Joash Woodrow 1http://108fineart.com/artists/joash-woodrow/ who went from Leeds Art college to the RCA and was on inside-track trajectory, but then had a breakdown and faded into obscurity until his house nearly burnt down and his work was rediscovered in his old age.

There are those that I consider true outsiders, that have no interest in being inside, such as Clarence Schmidt2http://www.historicalsocietyofwoodstock.org/clarence-schmidt. And there are those that co-opt it as a device to add intrigue or a sense of the exotic to their process. Maybe the true definition of an outsider artist is not that that they don’t have representation, but that they don’t ‘game’ or work the system with overt or subtle PR trickery. 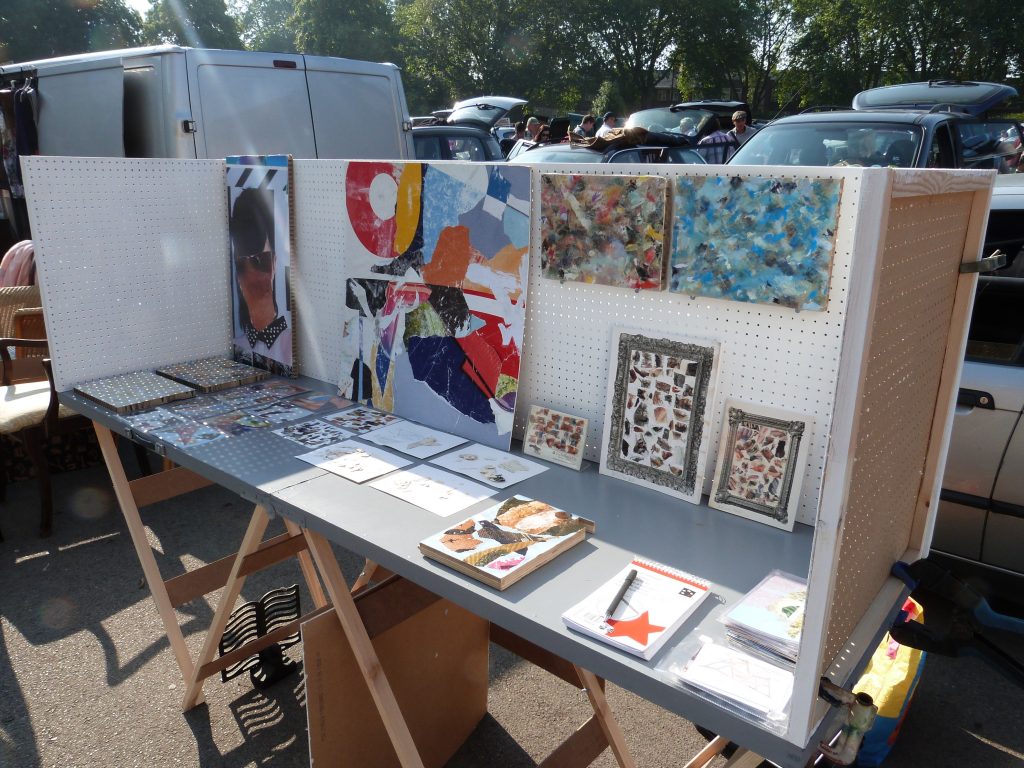 JB: What do you see as the future of Paste Table? What do you want the gallery to achieve?

NC: The future involves having regular shows, symbiotically inserted into galleries and institutions, but also randomly in situations where the public don’t usually encounter art. So far PTG has been at an allotment open day, a boot fair, in various libraries, and set up on the street in Kings Cross and Nunhead. Maybe a Doctors’ surgery or supermarket could be next. Spreading the gospel of collage to the public is one aim; but I have also started putting together a permanent collection for posterity. I would also like to get the PTG shown around the country and abroad, having made one foray to The Number Shop in Edinburgh. Also, not to come across as some munificent philanthropist, I do this as a way of showing my own work and cocking my leg at the lamp-post.

JB: How do you feel about being an artist and a gallerist? Do you mind the term ‘gallerist’?

NC: I was more comfortable with the tag ‘musician’, or someone who hangs around with musicians (the definition of a drummer). I made art works sporadically for years after leaving art college, but didn’t show them to anyone. It was only when my son, who is now a painter, started to make work and went to college that I started to talk about my ideas and show my work. Latterly I have become more comfortable with the term ‘Artist’, though interestingly my son always used to say he was only an artist when making work, and the rest of the time he was just a person. ‘Gallerist’ is fine: it is easier to say, because although it sounds a bit grand for what I do, it is once removed from me.

JB: Do you think this is a good time to be taking a ‘Do It Yourself’ attitude to showing art?

NC: In the mid-1970s, I was at St Martins when the Pistols kicked off and the era of Punk came into being. This was a time of DIY bands and galleries, though at times they had a leg up and entered the machine; I am not knocking that, everyone needs to eat. This was a time when London wasn’t really on the art map in the way it is now: there were few contemporary galleries and the idea that you could get work shown by any of them was just a pipe dream. You could sit in your basement, your squat or your garret waiting like a wallflower to be plucked from obscurity; or you could get on with it and try and create your own situation.

Getting back to the question: now is as good a time as any to organise things yourself, although things have got a little more prescriptive with all the antecedents and knowledge shared on the information superhighway.

One last thing I would like to say is how indebted I am to the Sage Arts Charity3www.sagearts.co.uk, which works with disadvantaged people. They gave me my first real studio in return for volunteering to run workshops and build a website. They gave me the physical and mental space to make art, specifically large works and also the Paste Table.