Jillian Knipe on ‘Beyond the Surface’ 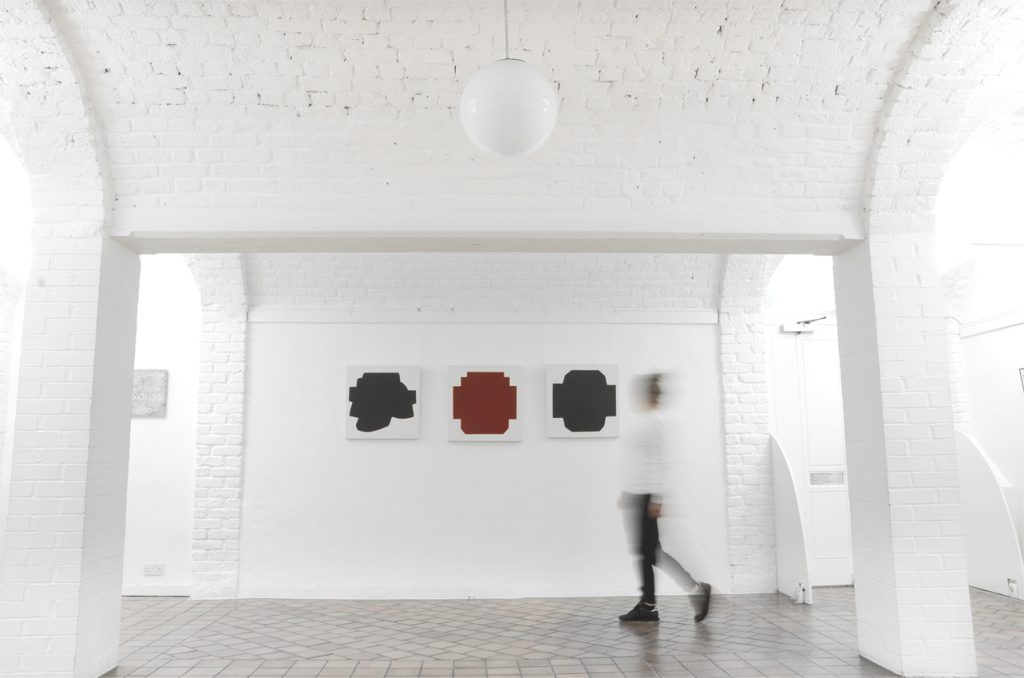 I’m glaringly aware I’m in a church. A place of prayer, deepest hope and mourning sorrow; where the narrative is reinforced by a surround of iconic imagery. Here, the arches pay homage to a long tradition of architecture which acts to enclose and hold fast the conviction of biblical doctrine: Duccio’s The Annunciation of 1307 comes to mind. To place an exhibition of abstract works within these same arches is to shift from story to conversation. It is an invitation for reflective thought; but in today’s racing hi-tech reality, do we really have the time or patience? 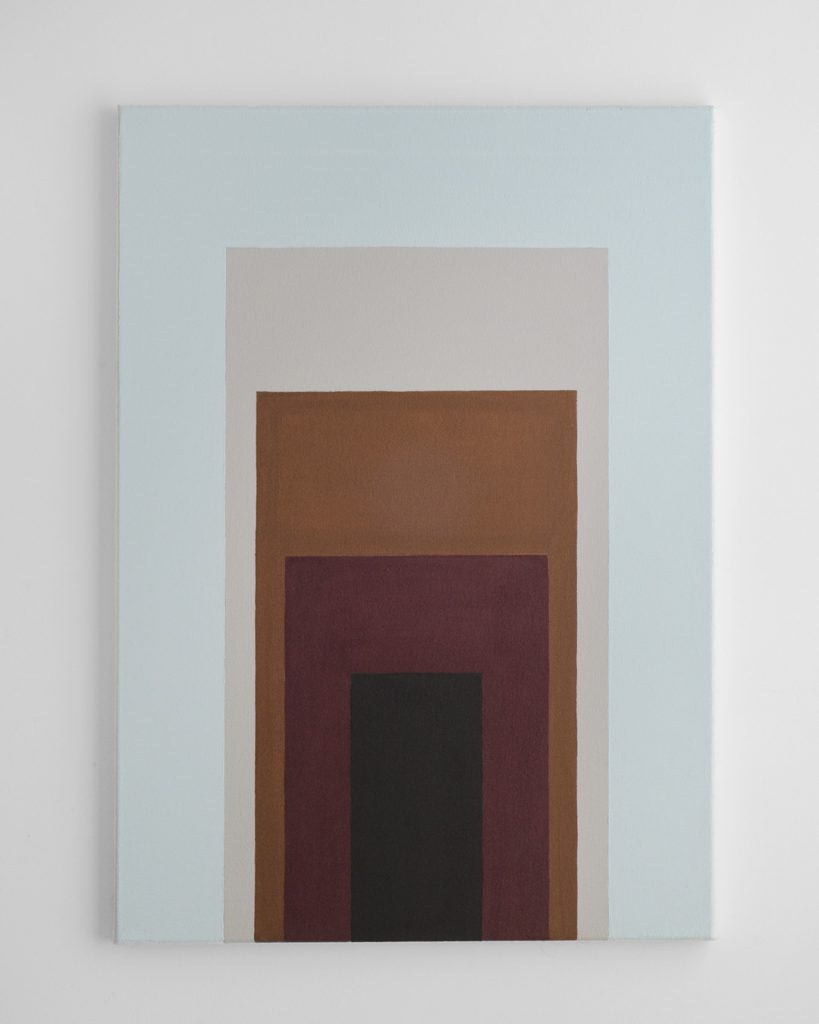 Piers Veness, in an exhibition organised by Square Art Projects, has brought together six painters who use a variety of algorithmic processes to construct their work. The result is a series of similar sized, geometric, mainly hard edged compositions which, following on from the title, urge us to consider what is beyond the surface. This immediately presents a problem to our digitally-linked fingertips. Are we in too much of a hurry to bother with all of this? Can’t we just click on an endless feed of online pics and be done with it? To ask what is “beyond” is to ask us to stop and to wonder; to take the time to imagine the systems and decision-making which precede the image. 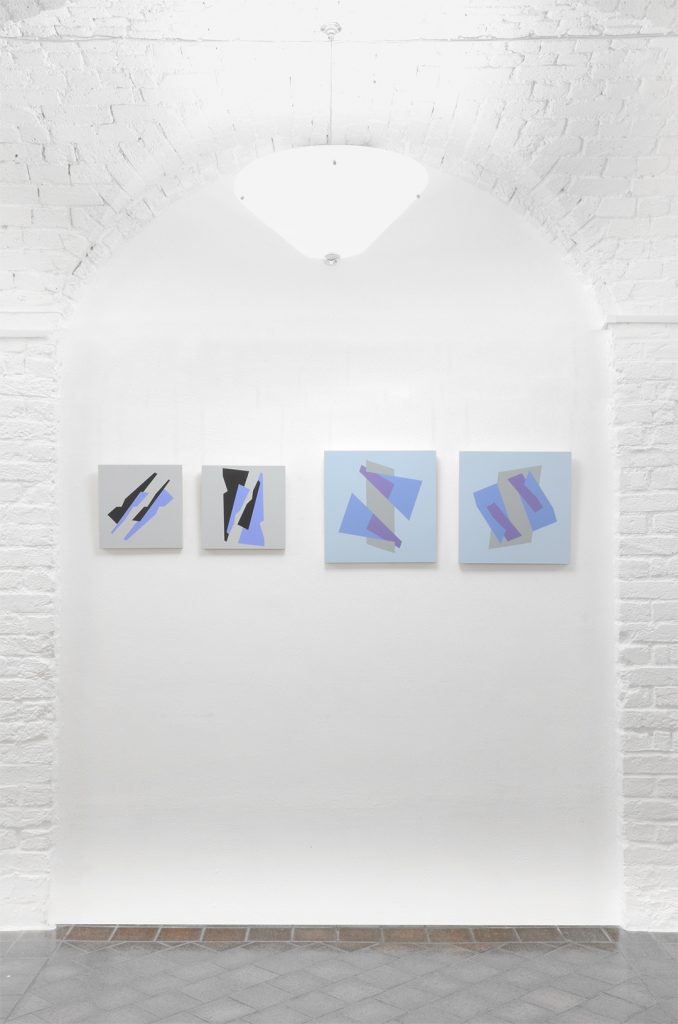 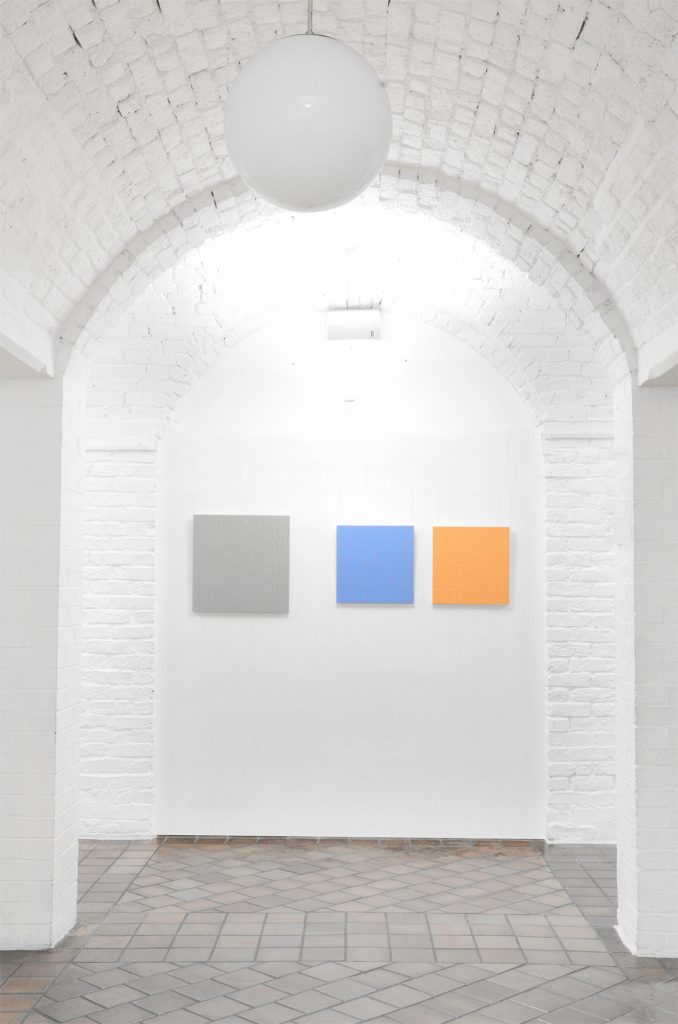 The room is circled by queries and prompts. Why do Julie Umerle’s floating shapes expand their way to the edge but never quite make it? Is this architecture in Piers Veness’s images, and is it advancing or receding? What determines the specific placement of markings on Simon Zabell’s softly spoken works? Are Hanz Hancock’s overlaps, underliers and interactions referring to objects or simply to themselves? Is there a numbering sequence behind Patrick Morrissey’s jazzy colour combinations? How has Marion Piper configured her strange black shapes, and are they being drained from their core? This is definitely a slow game. I am caught between my inquisitiveness and my fear that discovery may dampen the wonder. 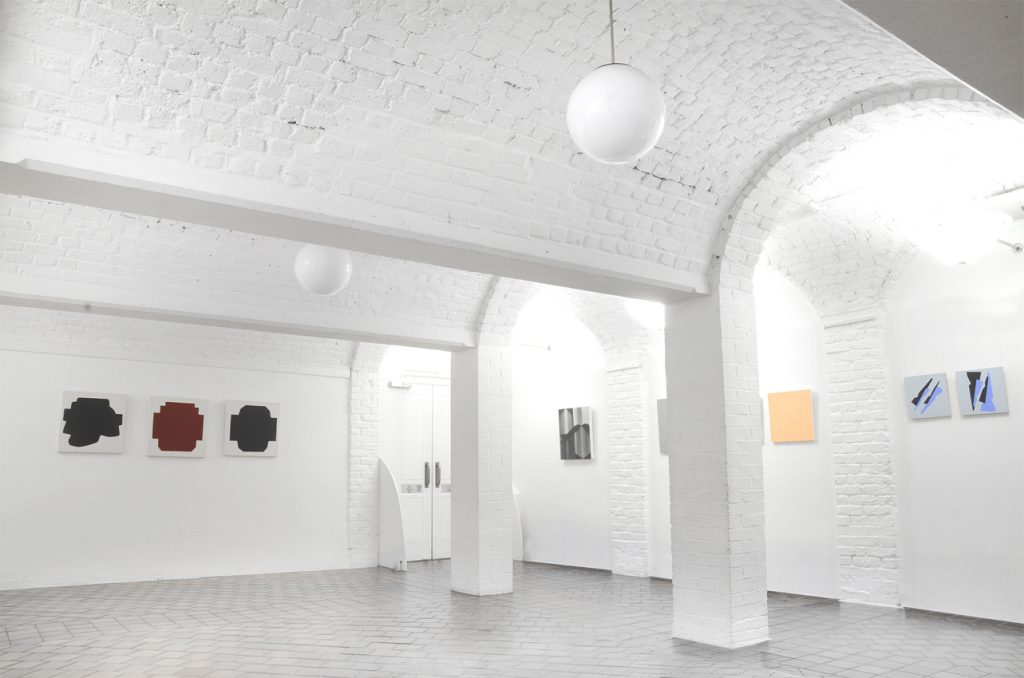 I sensed a connection between Marion Piper’s and Simon Zabell’s work, and contacted them both in order to delve a little further into their processes. Piper’s paintings, despite their modest size, are particularly striking. They are comprised of peculiar curve and line shapes which appear to leak off the surface. The use of black imbues the work with heavy seriousness, while the fragility of the bleed amplifies the solidity of Piper’s shapes. 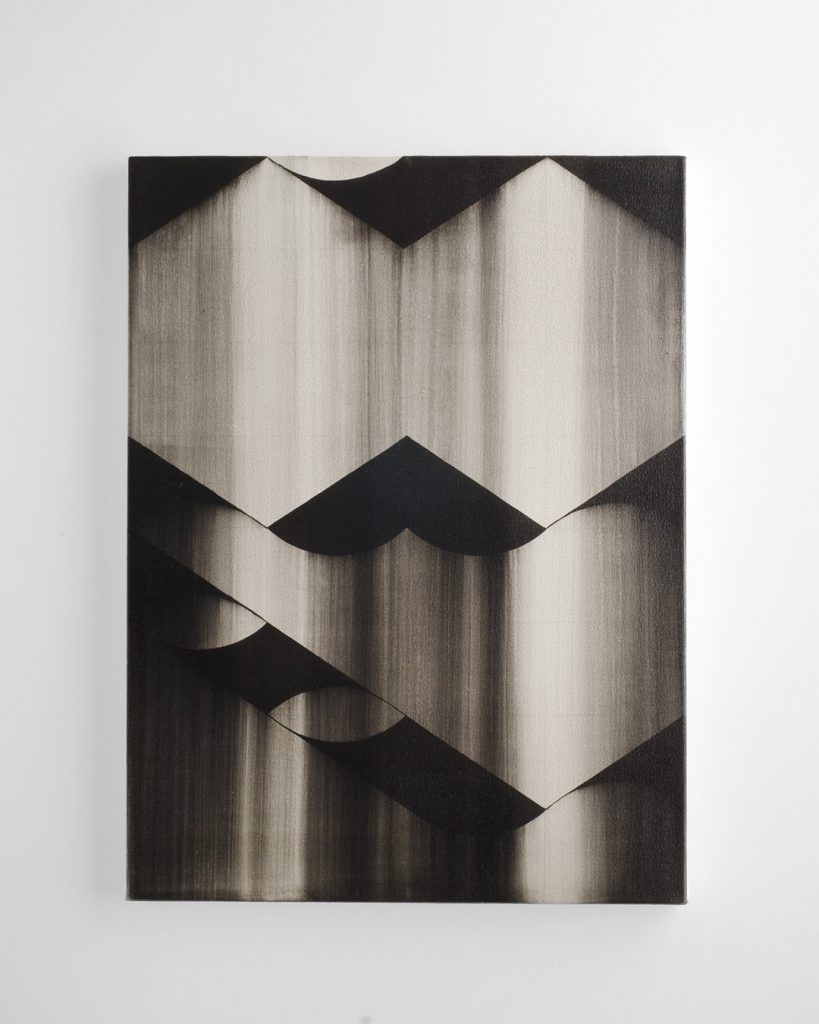 Piper described how she endeavoured to ‘separate judgement from the making’ by creating drawing sets with four actions – Grid, Draw, Move, Melt. A further aim was to release the forms by performing a continual movement, like reading or writing across the page, or shifting peripheral observation when walking around the city streets. It’s no surprise that she continually returns to Italo Calvino’s Invisible Cities: a fictional travelogue exploring places as ideas which closes with the description of a place visited yet unknowable.

This endless knowledge seeking and ambiguity can be found in Piper’s Repeat Copy series, two of which are featured here. When placed together as a group the results reverberate with the sense of a language, while singly, they offer symbols which suggest elements of that language. Forming a loose alliance is Simon Zabell’s process of developing a unique visual code for each of his projects. His paintings appear as muted pastel aesthetic against Piper’s emboldened black. 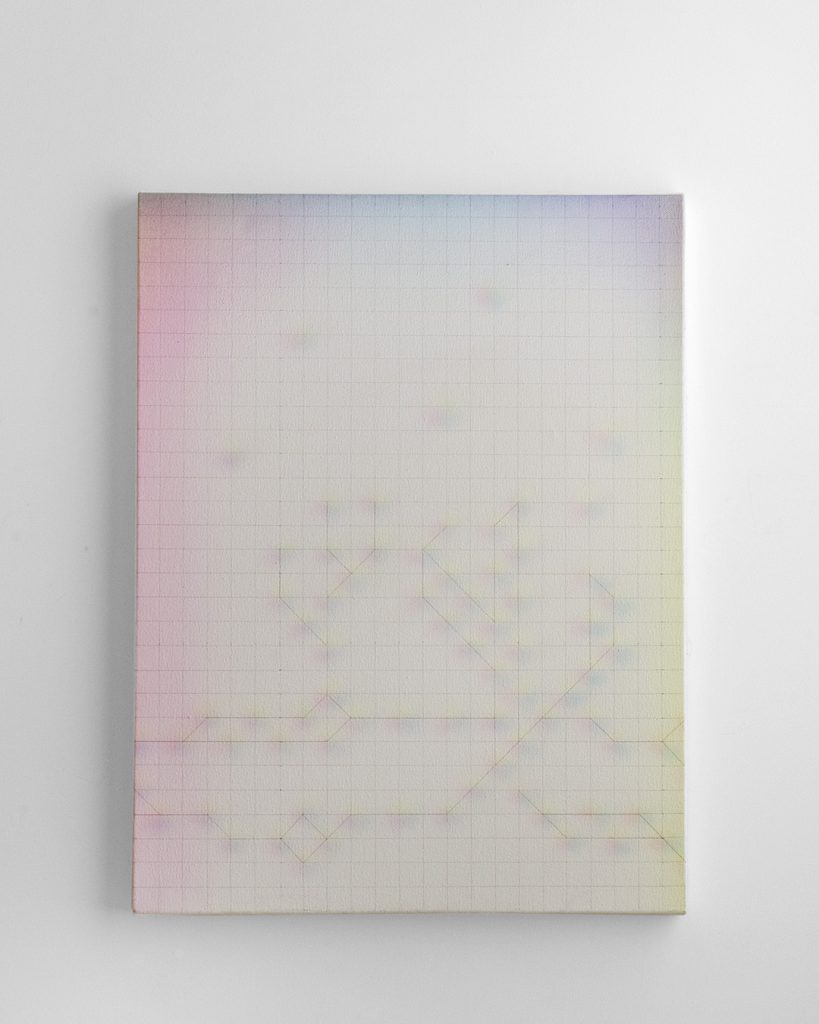 Zabell’s works are an interpretation of composer Olivier Messiaen’s Des canyons aux étoiles of 1971, which was inspired by the vast landscapes of America’s western states: he explained his intention as being to ‘translate Messiaen’s music back into visuals’. Not only was Zabell challenged by a desire to evoke a terrain that was, to him, unseen and unfamiliar, but also by the wish to mimic the way music floats around observation of the physical world without the rules of gravity.

Zabell’s paintings whisper gently in pastel sprays of primary colours as they liberate sky and horizon. Gridded locations and outlying pigments recall Olivier’s hurried notes, piercing highs of the violin and manipulations that mimic the rush of the wind. They share the powerful elusiveness of music’s fleeting presence.

And there is the connection: a momentary grasping, and a letting go, in both Zabell’s and Piper’s imagery. A recording of experience; of seen and sensed observation transformed into visual substance. Two artists who begin with a formula, then subject it to a more organic process, thereby transforming it into its own entity; all the while affirming that systems are of us, and not beyond us. 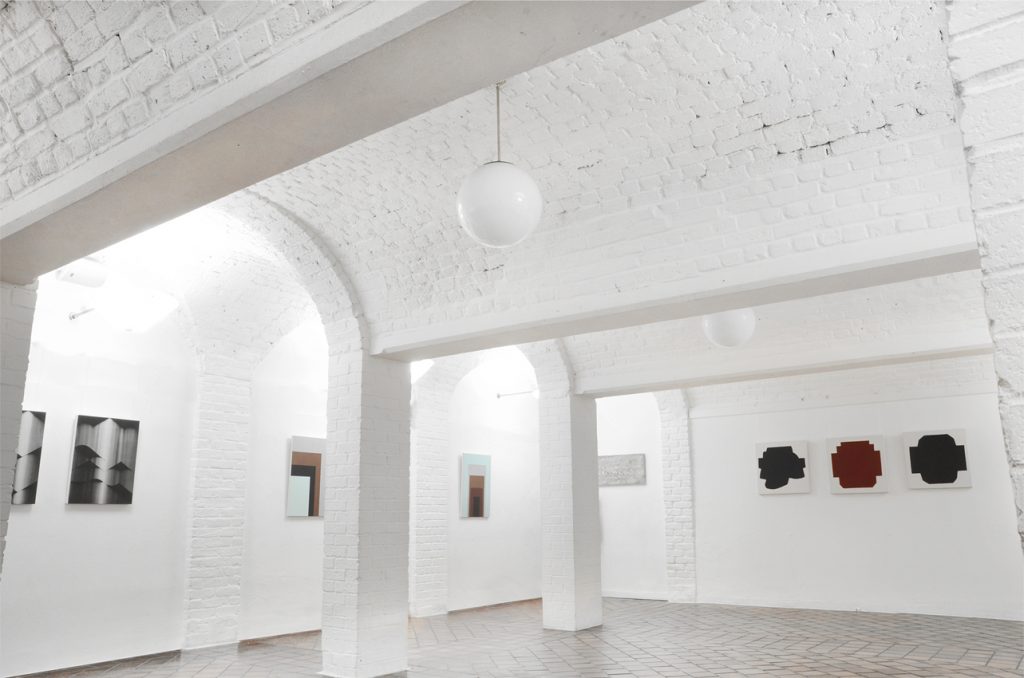 It is worth noting that Beyond the Surface is made possible through the painting group Contemporary British Painting. Their longstanding residency at St Marylebone has evolved from members’ exhibitions, to selected groups curating their own shows. Artist Wendy Saunders who, along with Ruth Philo, runs the social media side of CBP as PaintBritain, admires the way Piers has ‘not tried to do something too fanciful so the work really flows around the space’. She has stated that without the generosity of Father Stephen Evans and Buildings Manager Elena Mocanu, this gem of a space in central London would not be available. Of course, the space relies on those willing to make the effort to visit, so that the work breathes with connection and relevance.

Interviewed by Louise Steiwer about the recent closure of his Copenhagen gallery, David Risley commented on the drastic drop in the number of visitors to small galleries. ‘Globally there are fewer people going to galleries, and I think a big part of that is probably Instagram and the internet in general. People think they have seen things because they’ve seen it online.’ He was particularly critical of artists, curators and critics not getting around to see shows. Maybe David has forgotten just how busy London is; although his words might also be construed as a call to action, lest we resign ourselves to art existing only for the market system. Perhaps it’s just a faltering hope that if we have the time and inclination turn up, we might just invest our curiosity in truly looking beyond the surface.

Beyond the Surface is at St Marylebone Parish Church Crypt Gallery, from  28th March until 14th June 2018. It is a group show, curated by Piers Veness, and featuring work by Hanz Hancock, Julie Umerle, Patrick Morrissey, Piers Veness, Marion Piper and Simon Zabell.