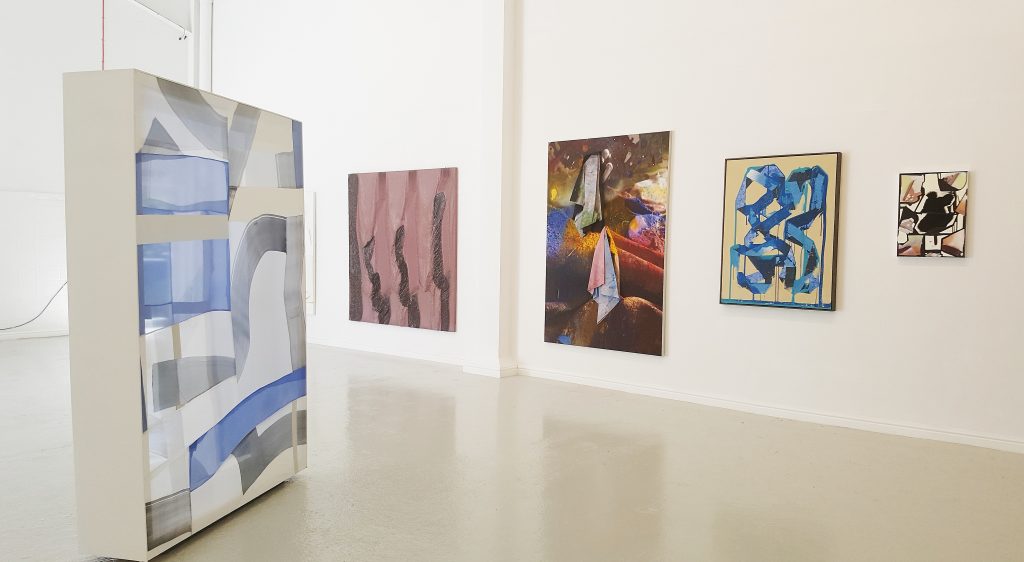 It is taken for granted in the realms of popular music that the qualities of the human voice, whether vulnerable and haunted or ecstatic and soulful, can be commingled with the repetitions and sequencings of both electronic and sampled sound. Think of Donna Summer’s 70s hedonistic anthem I feel Love, Soft Cell’s magisterial rendition of soul classic Tainted Love, Grandmaster Flash’s White Lines, Prodigy’s Firestarter or Underworld’s Born Slippy. The list goes on and on.

This particular form of genre-breaking music history has relevance here, because I think it has some kind of connection with Surfaced, an exhibition of paintings in Woolwich Arsenal, east London. We are now fully engaged with the delirious levels of innovation and possibility that are opening up in this digital age. Surfaced asks: how might painting be seen differently as an art form in relation to this technological revolution? Just as the human voice has found new and meaningful relationships with electronically generated sound, how will painting deal with the digitised visual world channeled to us by screens?

2. Don’t touch me, please! I cannot stand the way you tease!

We are, by turns, either frightened or aroused by the power of the all-pervasive screen, with its seemingly infinite potential for communication, and for the mining of visual information. It threatens to control us, but at the same time it offers us some notion of creative liberation. This idea of liberation, both personal and political, has also been a subtext of modernist art, and especially of abstract art, since their brutal beginnings in the ferment of industrial and political revolution, and of two world wars: and it is made manifest in the countless nuances and energies, both visual and physical, that define painting’s potential for mediating human experience. There is an irony, then, beneath the surface of Surfaced: that by working to make us aware of how our vision has been lit up in new ways by the ubiquitous screen, the exhibition nevertheless brings us face-to-face once more with painting’s haptic materiality, its singular agency, its ‘hereness’ and ‘thereness’.

Of course, it is widely believed that abstract painting has relinquished its position as the standard bearer of all that is most advanced in art. The story goes like this: the hollowing-out of its expressive potential began with the ironies of Johns and Pop-era Warhol, and entered its terminal phase with the nihilistic procedures of ‘Neo-geo’ artists such as Peter Halley and Ashley Bickerton. Now, in its ‘post-historical’ condition, abstract painting cannot express any sense of a new social reality, or so the argument runs; and it should therefore mind its own business, exploring its own history of forms, and ruminating upon its own peculiarities and qualities. This reading entirely fails to recognize the degree to which the will to create self-sufficient abstract images clashes headlong with the changing social, political and technological realities of the present day, and, in doing so, acts as the agent of change that generates real innovation in painting. The warping of the picture plane by anterior forces haunts the history of abstraction; there has got to be some kind of fly in the ointment, or grit in the pigment, to create friction, and thereby generate the heat that will be the catalyst for change. The work of each of the artists in Surfaced seems to be alive, in different ways, to this kind of frisson or tension.

4. Sometimes I feel I’ve got to run away… 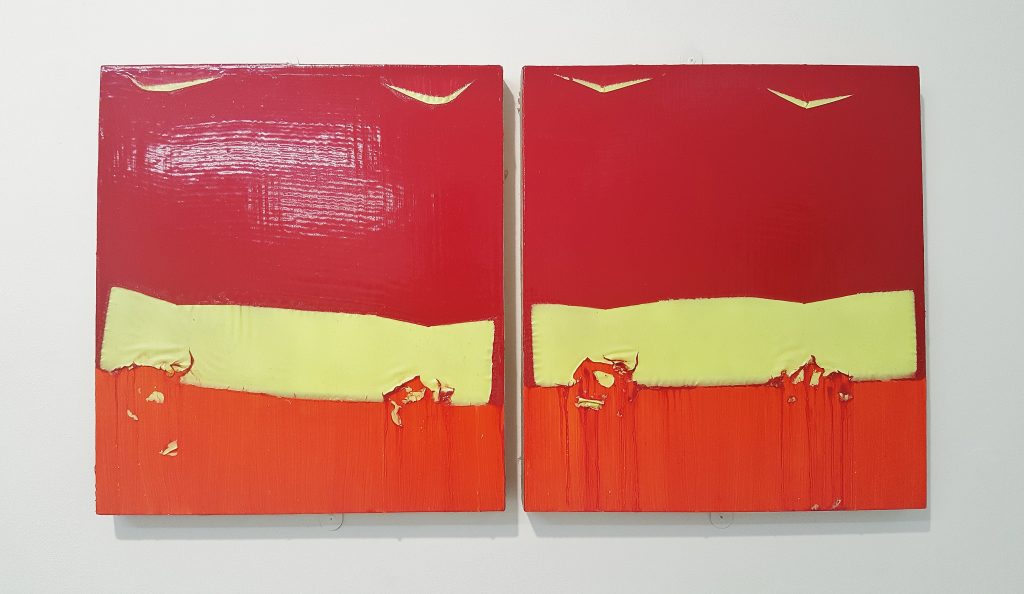 Alexis Harding’s sumptuous surfaces are formed by the slippage of paint layers as they succumb to the force of gravity. A new kind of expressivity asserts itself, born of a series of booby-traps set by the differing drying speeds of the varied paints he deploys. This process-driven approach works to undo the initial formal ordering or structuring of the painting surface: allowing free rein to the innate entropic qualities of the paint hastens the disintegration of formal order (in Harding’s case, usually a grid-like structure). In Landing (twice) (2018), we see just how sensitive he is to complex densities of colour that pack a real punch. Meanwhile, his fellow John Moore’s prize winner 1Editor’s note: Moloney received the ‘Visitors’ Choice’ award, Donal Moloney, offers us a different kind of ambitious painterly complexity: in his one exhibited watercolour on paper, a myriad of shards and splinters of imagery are buried and fused, jewel-like, in the painting’s rippling facets and surfaces. One is reminded of the atomising dabs of colour in Monet at his most experimental; the late modernist all-overness of Larry Poons; even something of the kaleidoscopic and metamorphic writhing imagery of Hieronymus Bosch. 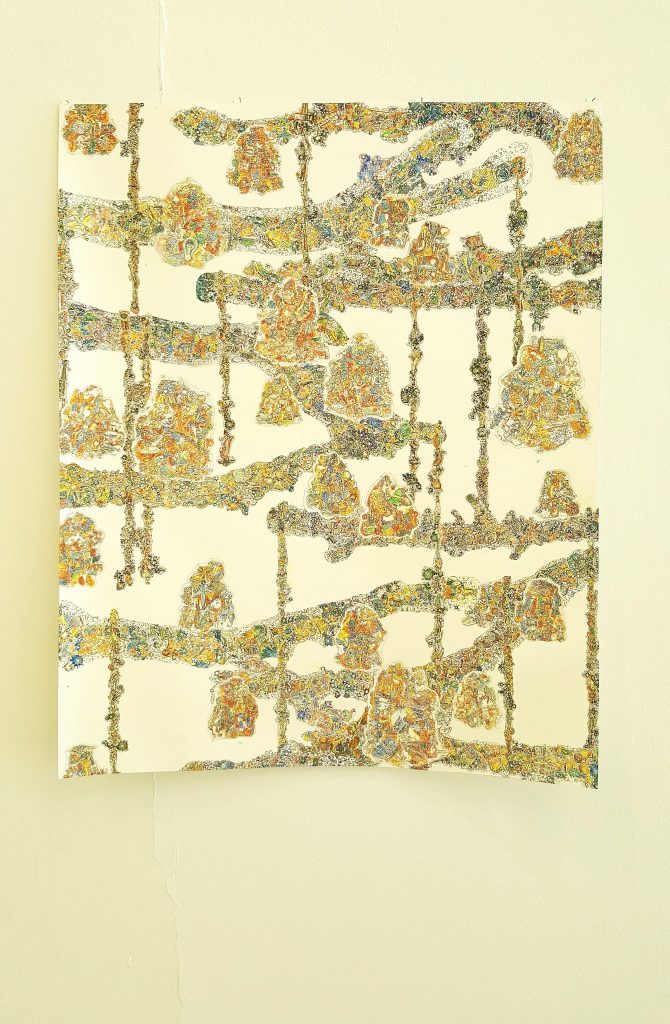 The criticism often aimed at mixed-media art is that, for all its conglomerations of different stuff, the results remain dull, lacking the movement and luminosity of unsullied pigment against canvas. Surfaced seeks to address this argument by presenting works that juxtapose meldings of ethereal imagery and finely-judged colour with punchy and immanent materiality. Sarah Kate Wilson’s Shrink Wrap paintings, in their brutal immediacy, work as a corrective to notions of slick, digitised finish. These works contain an array of materials, objects and images that in some cases have been collected by people who have then been invited by the artist to add these material gifts to the shrinkwrapping process. These arbitrary mixtures of objects and images are then flattened within layers of plastic film, pulled over stretcher frames, and left tightly bound in a sort of glistening lo-fi suspended animation. They court the languages of the Support/Surface group of late 60’s Europe; but they also meld these high art associations with the startling arbitrariness and often brutal absurdities to be found on an everyday search of the internet. 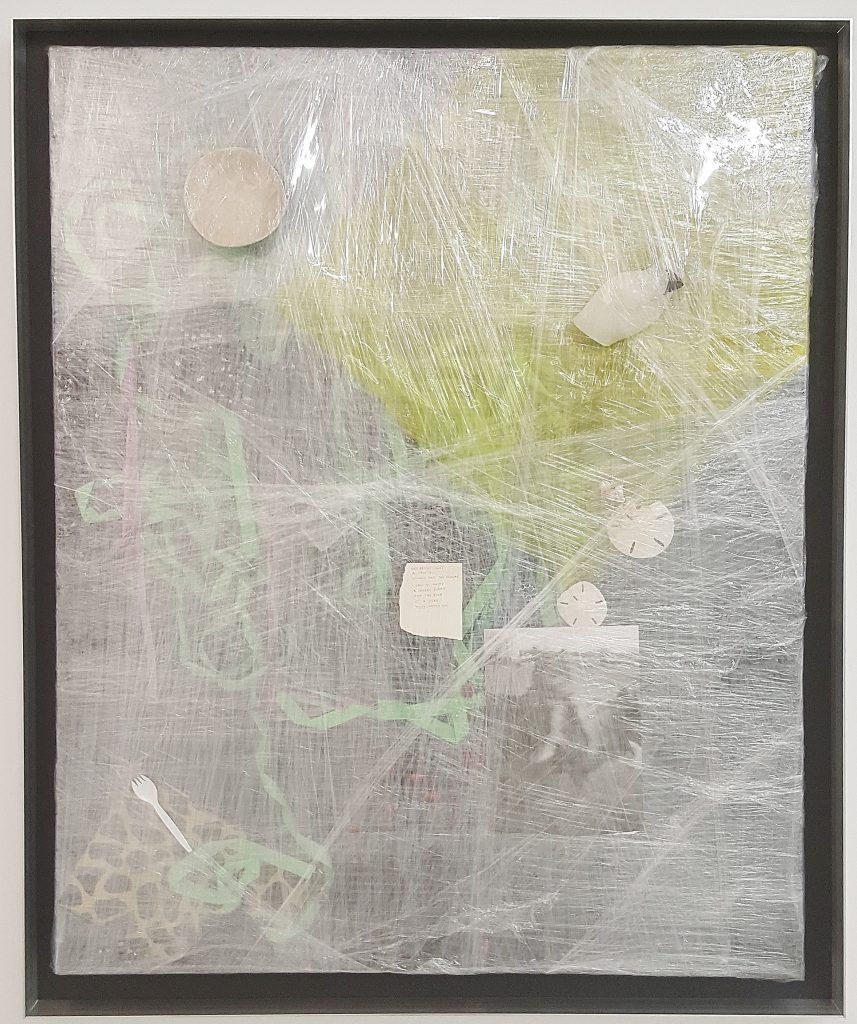 Indeed, echoes of Support/Surface can be heard throughout the show. Jim Cheatle and Antoine Langenieux-Villard both foreground how the structure of the support can create its own visual language as it simultaneously underpins and undermines the picture surface. Cheatle brings the folded planes of a cubist vocubulary to bear on painterly bleeds of colour. This pushing of hard edges against soft gradients generates illusions of shallow space, creating a peculiar rhythmic visual charge. In a free-standing work angled across the centre of the gallery, Langenieux-Villard creates calmer rhythmic turns, rendered in repeated gestures of cooler tones. The gentle, meandering gestural marks move in shifting blue tones across some sort of transparent surface, anchored in a deep box frame: the subtle tonal transitions encourage careful looking as one moves around the boxed images. As one peers through its translucent surfaces, moments from the quiet street outside the gallery are captured and held within it: framed by the cabinet-like form, they float in and out of focus. 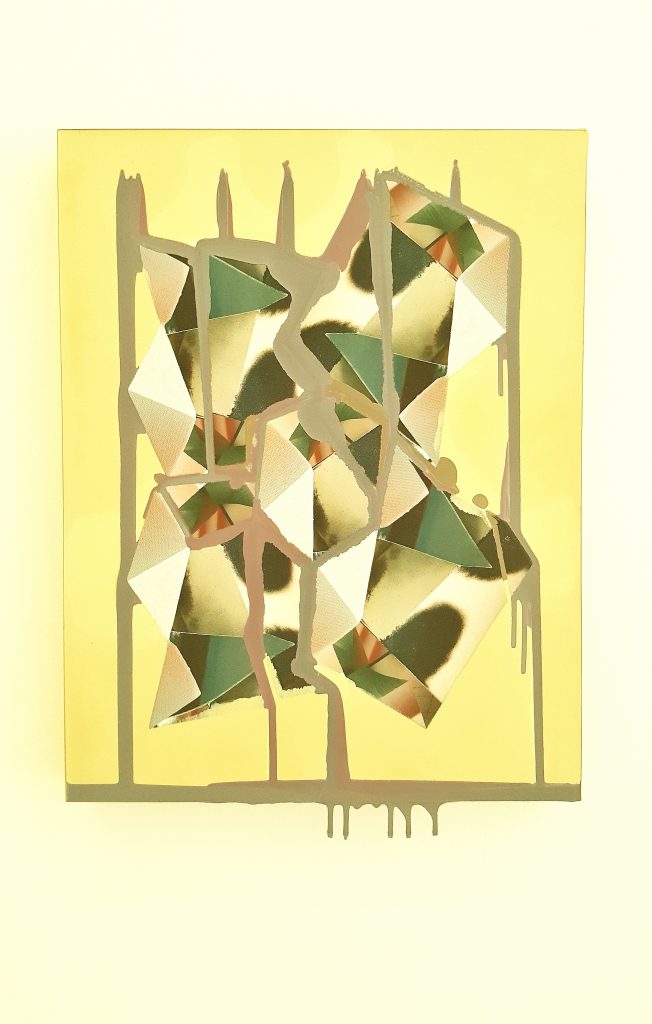 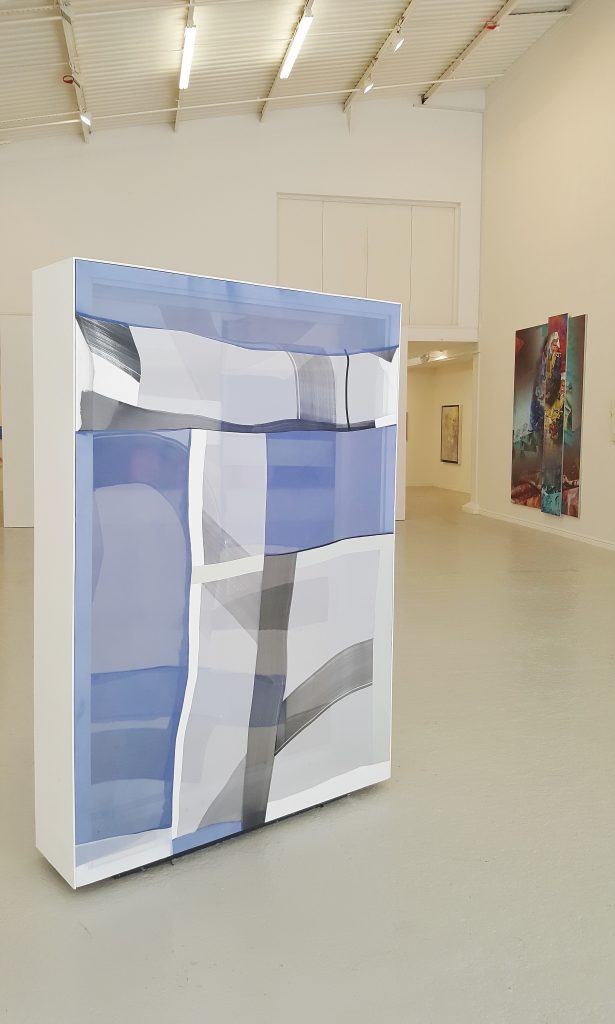 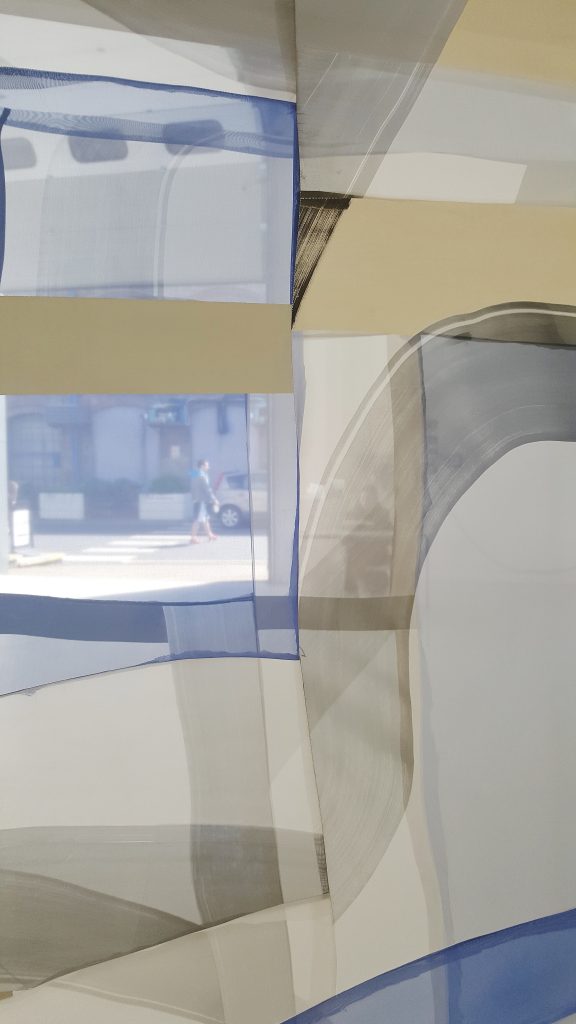 It is in the work of Peter Lamb and Alison Goodyear that the two realms- digitally reproduced imagery and painterly concerns- are most overtly combined. The results are by turns subtle, mesmerising and unsettling. Goodyear’s paintings seem to open up a world of endlessly shifting planes that banish all hope of finding grounding horizon lines or hard edges that might anchor our gaze with easy compositional devices. Like Moloney, Goodyear and Lamb present vaguely familiar signs from the history of modernist abstract painting that simultaneously suggest both dense all-overness and rampant materiality. We soon realize, however, that this overt painterliness is being allowed to evaporate into seductive representations of itself. Goodyear conjures a sense of other worlds- almost submarine or jungle-like; beautiful orchestrations of tonal colour, pale and wistful, create subtle optical play-offs between translucency and opacity. We are momentarily permitted to glimpse submerged worlds within the paintings: much as one would peer into a deep woodland stream. 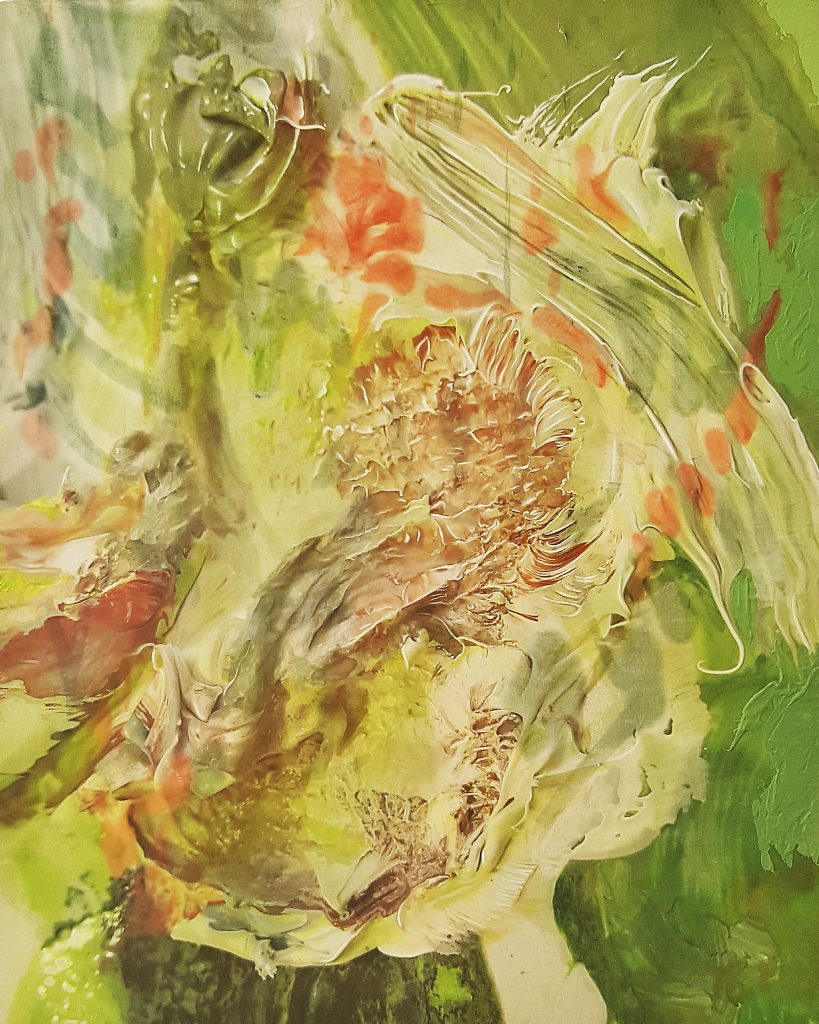 By contrast Lamb, with an audacious use of size and oscillating scale, ushers us into a mesmerising but disorienting painterly hall of mirrors. Suggestive imagery, based on photographs of lobes and conglomerations of drying paint, sends the eyes skating back and forth across the image surfaces, vainly seeking some sort of equilibrium. The physical reality of aluminium frames within frames is played off against representations of window-like structures and arcs which, in turn, evoke the open ‘windows’ of Photoshop, or other such software, laying open in layers on a computer screen. Lamb also allows unstretched man-made material, with imagery imprinted deep within it, to hang listlessly away from the paintings’ synthetic surface. In contrast with Alexis Harding’s evocations of entropic, geological time, Lamb summons up the sense of mere nanoseconds of perception as the eye flits between the micro and the macro. Underneath all this there lies a suggestion of the highly stylised fashion and art photography of the postmodern era; but Lamb also seems fascinated by the opulent and sumptuous surfaces of late-modernist painterly painting (think Poons again, and also Bowling and Olitski). He seems to digitally twist and turn this dense painterly matter over and over, adding layer upon layer of imagery as he goes; and one is also reminded of the giant mega-tarpaulins, that new generation of hoardings that can cover the entire sides of multi-storey buildings in advertising imagery. In all of this, there is a strong sense of visual hide-and-seek: the obsessional layering of films of paint of many a late modernist painter finds its equivalent in Lamb’s endless overlaying of representations of painterly imagery, which seem to bleed back into one another, or suddenly split apart, only to reconfigure via the operations of the computer screen. And yet, despite all these digital manouevres, the level of complexity in colour-play and the just-so melding of contrasting formal arrangements, born of inherently visual decision-making, makes this painting with a capital ‘P’. The overall effect is scintillating and fascinating. Each painting has a singular presence and a weight all its own. 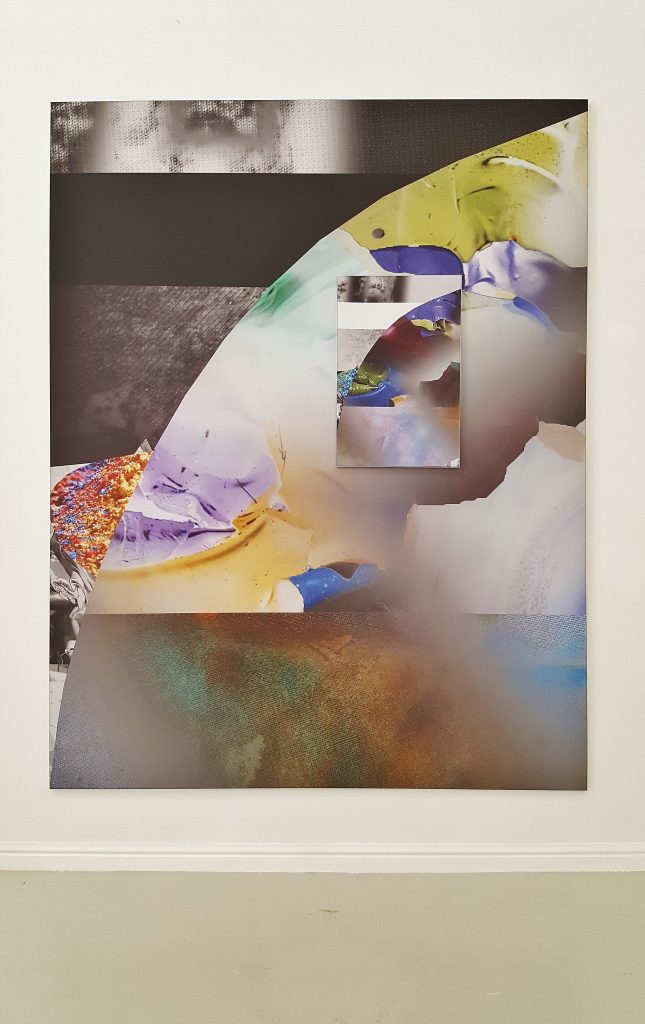 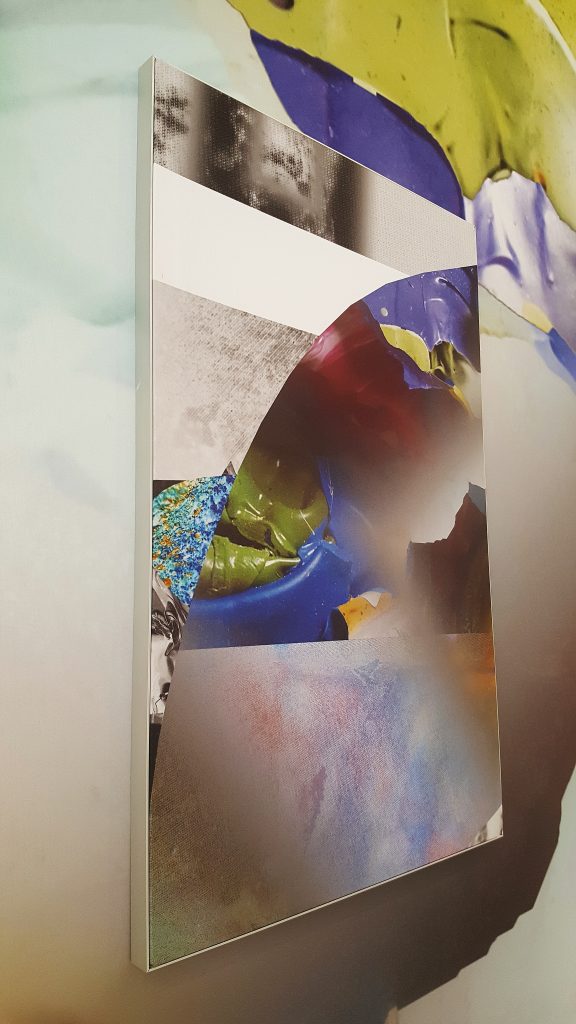 Historically, in its attempts (and frequent failures) to deal with the ravages and revelations unleashed by modernity, abstraction has strayed into unfamiliar territories. In doing so, it has found itself engaging in dialogues with other media: and yet it has been argued these other media- photography and film in particular- are far better suited to expressing the spirit of an age than painting. Surfaced advances a counterargument: that abstract art is able to absorb and ingest aspects of other media, and in so doing, offer a critique of those media whilst continuing to reinvent itself. This is the impetus that will carry abstract painting, in its expanded forms, into the future. It is the wonders, the cruelties, the ironies and social peculiarities of our age- and of the new media in which they are expressed- that have poisoned, and will continue to poison, abstract painting. And it’s the taste of that poison that keeps us coming back for more.

I love you though you hurt me so, I’m gonna pack my things and go.

4 thoughts on “John Bunker: Tainted Love: Thoughts on ‘Surfaced: Surface and Materiality in the Screen Environment’”