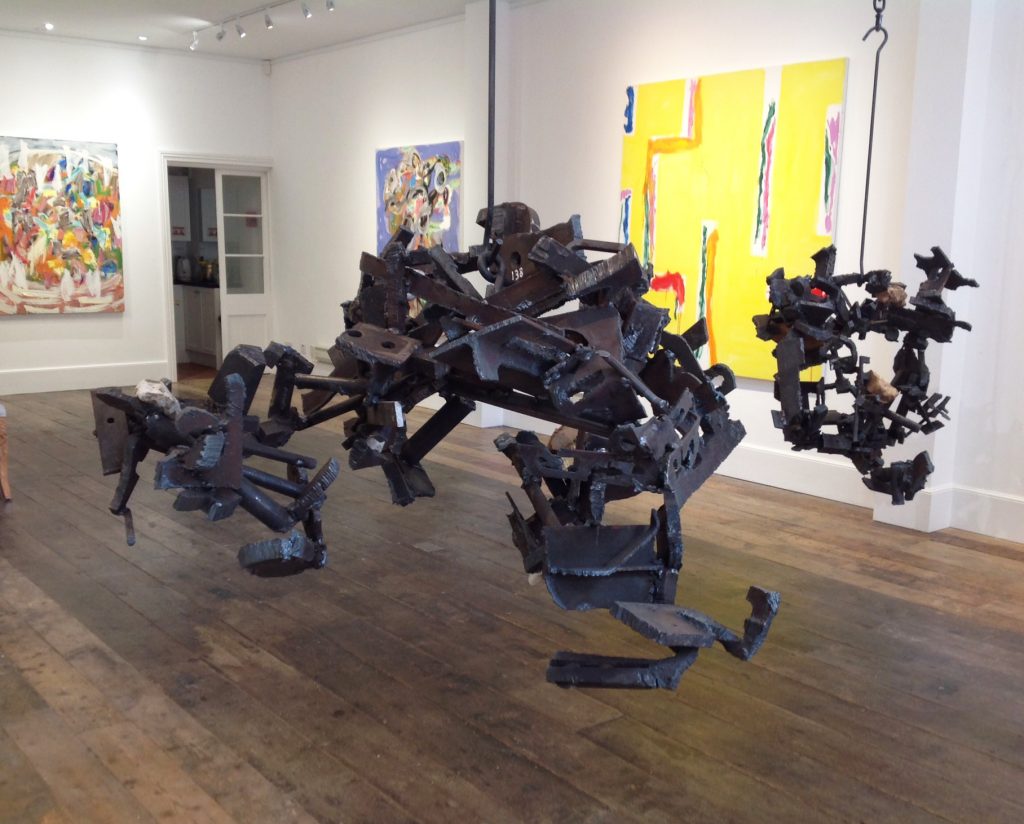 Housework, they say, is only visible when it hasn’t been done. By the same token, the conventions that govern how artworks are supposed to be displayed- especially abstract ones, where considerations of form and arrangement are absolutely paramount- only seem to fully reveal themselves when they are flouted. ‘Transformations’, a powerful show of work by Robin Greenwood and Gary Wragg at the Linden Hall Studio, just a beach pebble’s throw from the sea at Deal in Kent, up-ends the conventional gallery relationship between a certain kind of sculpture and a certain kind of painting: and in doing so, forces an awareness of how blunted by familiarity our ordinary viewing habits have become; and of how the experience of seeing art in new combinations can prompt all sorts of questions.

Three out of four of Greenwood’s sculptures have been made to be hung: and on entering the gallery, it is impossible not to register a sense of shock, that they are suspended there, in all their brute materiality, interrupting the sightlines to Wragg’s paintings, and demanding they be looked at. Of course, hanging artworks from the ceiling isn’t surprising in itself: there’s Calder’s mobiles, for example, or Rauschenberg’s early ‘Fetish’ assemblages, or Nauman’s upside-down cast wax heads; not to mention any number of installations that feature hundreds of similarly-sized objects suspended by fishing wire. What is surprising is seeing it done to welded steel sculptures whose weight, even when unbolted into their constituent parts, required a team of helpers to get the work into the gallery and up the stairs to the upper storey. 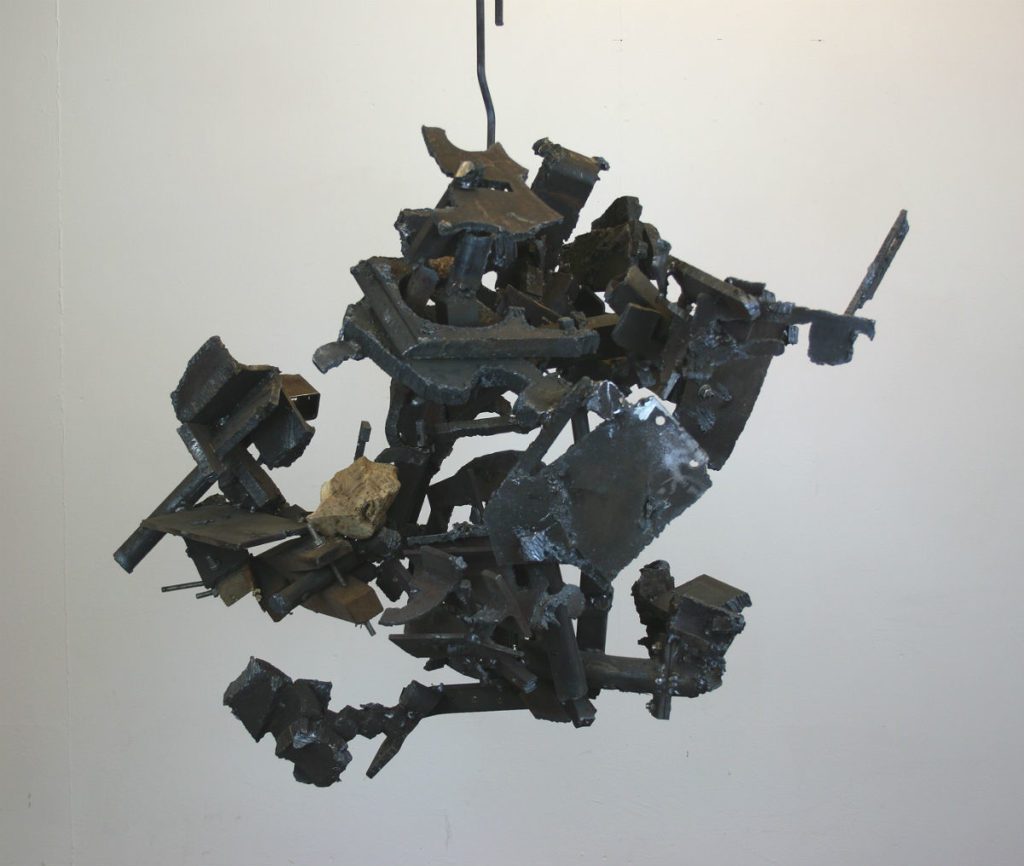 The striking thing about encountering these sculptures in the flesh is the degree to which they demonstrate willingness to throw out the rulebook that governs three-dimensional work with high-modernist lineage- and don’t appear to suffer in the slightest as a result. Viewed on the Linden Hall website, it’s far from clear what kind of physical presence they have; if ever a group of three-dimensional works confirmed the truth of the old cliché about photographs not doing sculpture justice, it’s this one. Seen only as images, they appear problematic, in a number of ways. To begin with, there’s the issue of how they’re hung: suspended from hooks. To have made the hanging system invisible- via some sort of super-strong, barely visible wires, say- wouldn’t have worked, as that would have been to court illusionism. To remain true to the materiality of the sculpture, whatever gets used has to be as fully available to the sense of sight as any other part of the work, and the double-ended hooks Greenwood employs are certainly that; but they are all function; their form is inert, and gives nothing to the sculpture seen as a whole.

Next, there’s this to consider: the set of things-that-sit-on-the-floor is pretty much limitless: and so, a floor-based abstract sculpture tends not to be reminiscent of anything else in particular, other than itself. The set of things-that-hang-off-a-hook is far smaller, and so a hanging abstract sculpture is much more likely to evoke unwanted associations with other members of that set, such as chandeliers, hanging baskets, carcasses in the butcher’s shop window, even (most unflattering of all for sculpture in metal) the magnetic grab at the scrapyard.

And then there are the implications of their no longer being on the floor, which can be understood as both physical and psychological: by not being grounded, surely they surrender agency, and appear lightweight? 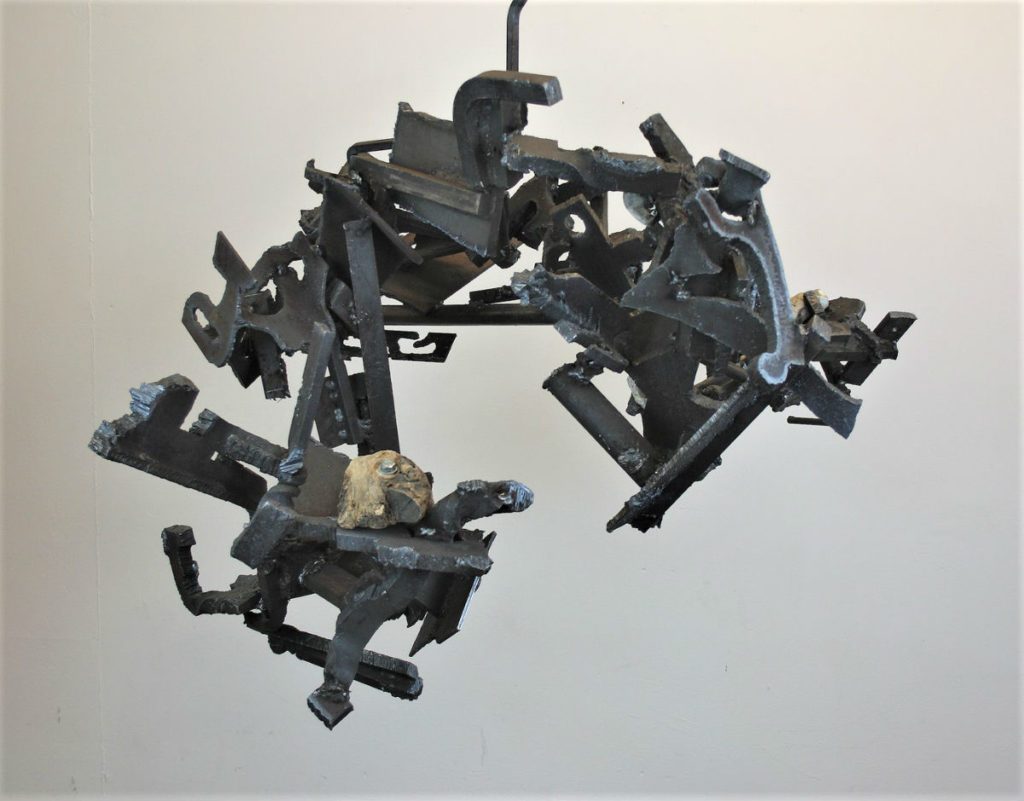 It’s a relief, and a pleasure, to be confronted with the work, and have all doubts answered. The three hanging sculptures have such concentrated presence, and project such an overwhelming sense of their every part having been entirely seen and felt in relation to every other part, that they seem to generate their own gravity, like gyroscopes; this has the effect of appearing to render the floor beneath them, the hanging hooks, and all conceivable connection to things other than themselves irrelevant, and therefore all but invisible. They demand the longest, hardest kind of looking-at, looking-around, and looking-into; and they reward it with an unfolding experience of fresh discoveries for the eye to make. From one viewpoint, Big Monmouth seems to gather itself into a single breaking wave of metal; another quarter-turn around it, and it unravels into a stupefyingly complex sequence of torqued forms, each differently angled and uniquely articulated. In Kwoke 166 the bolts, the spot-welds, and the molten, crenellated edges of its component parts are as much its language as the parts themselves; and this declarative matter-of-factness is further emphasised by the lumps of wood and plastic dotted throughout the structure, and by the frankness of the red metal eye that receives the hanging hook. Most declarative of all, however, is the big cut-out ‘four-leafed clover’ right next to it, which perches there, daring the viewer to read it as that, rather than, say, ‘cruciform with four ovals’. With this, and with the little ‘fish’ that attaches itself to the trailing filament in Tree at Ornans, the one out of the four pieces that sits on the gallery floor, it’s as if Greenwood is asking, as he is with the raising of his sculptures up into the air, how fast and loose is it possible to play with abstraction? What can be added, and what can be got rid of? And what can he get away with? 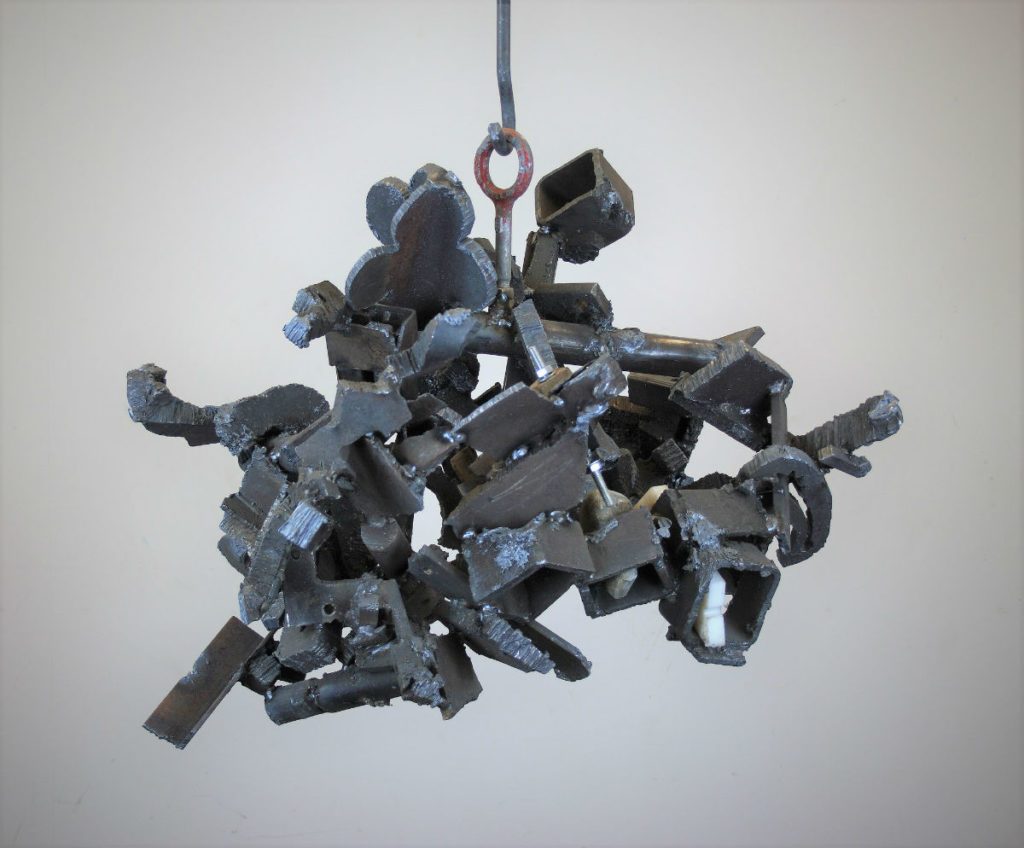 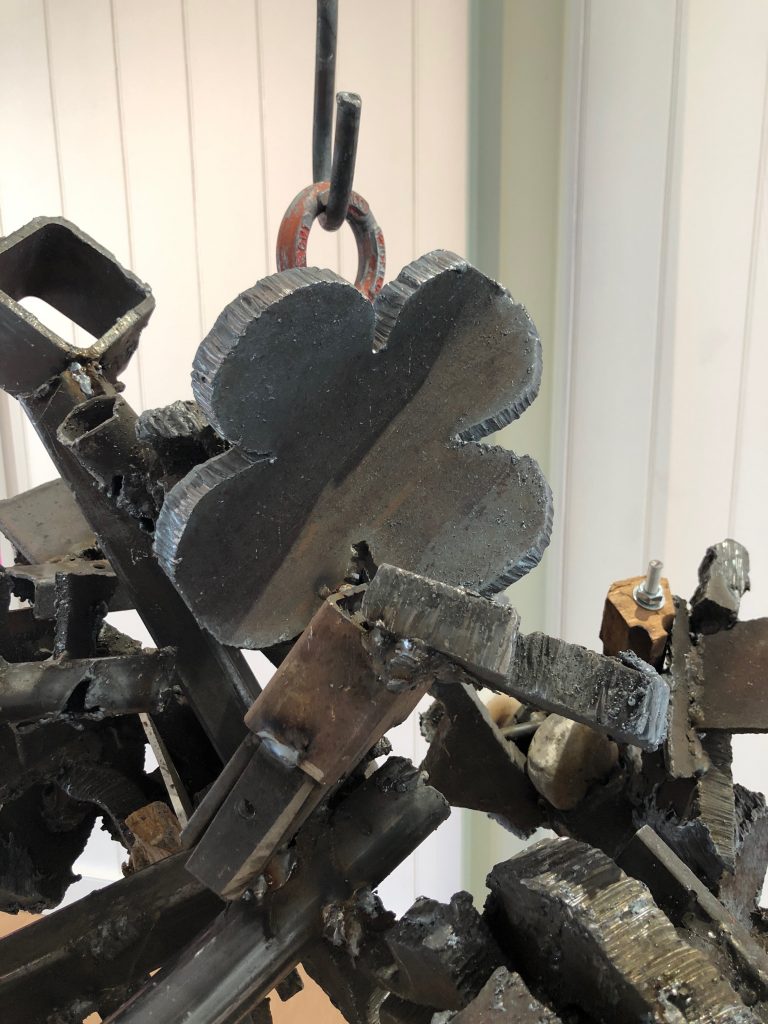 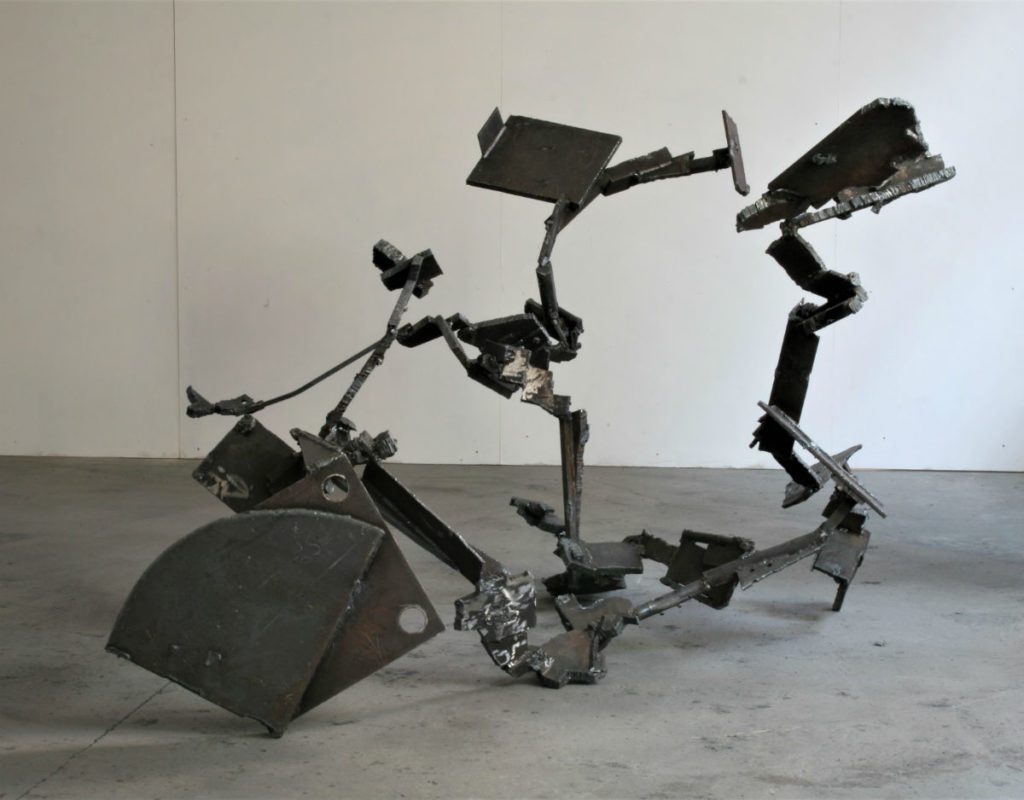 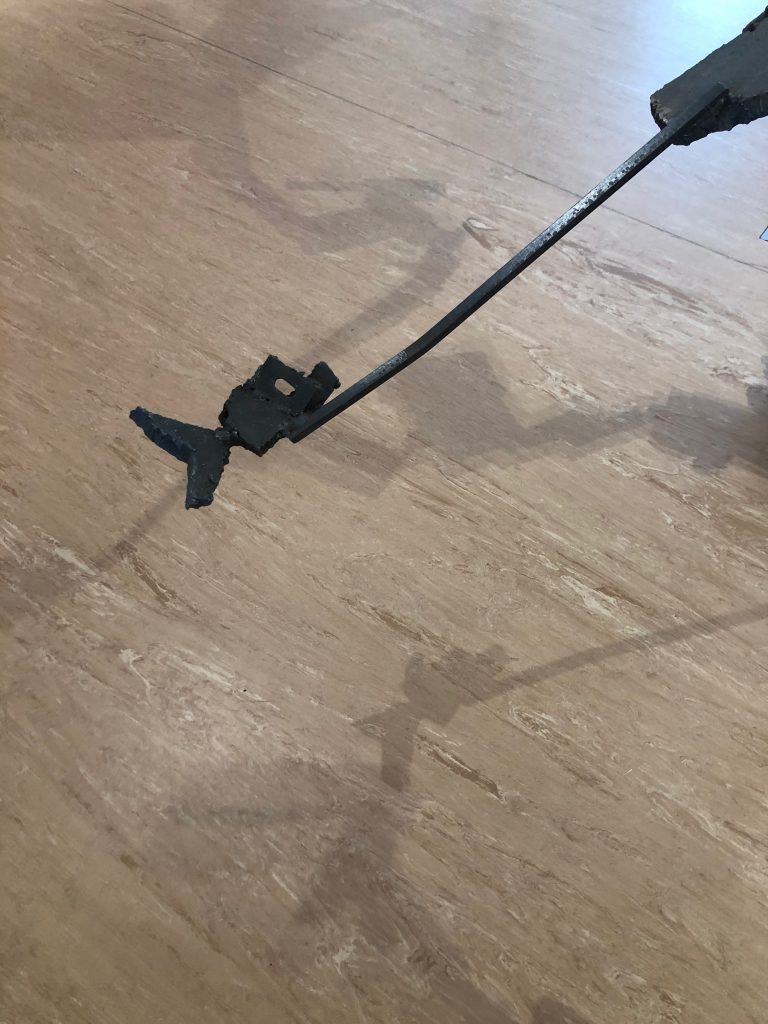 Wragg shares with Greenwood both his delight in improvised form, and his willingness to keep on adding one thing to another in order to find it. As a gestural abstract painter, however, he knows that his medium and his methods don’t allow him the luxury a sculptor enjoys, of being able to subtract what has already been added; and it is this which propels his paintings, and lends them their urgency- this sense that every addition is also an obliteration. It is also, interestingly, what protects them from accusations of pastiche: looking at O T B D G, for example, it isn’t hard to find passages that are strongly reminiscent of Hofmann, or Mitchell, or the Pollock of Full Fathom Five; but nowhere is there the sense that Wragg is trying them on for size in the postmodern hall of mirrors. Rather, the scribbles, splashes, swipes and pourings read as a frenzied effort to extricate a coherent abstract architecture from the surface, at the very point that the paint seems about to inundate it; and if the viewer happens to be reminded of another artist in any of this, then the painting seems to be saying, well, that’s your problem, not mine. Everyone working now is aware that all conceivable ways of putting paint onto a painting have already been tried: it is no longer possible to make a mark that isn’t, in effect, someone else’s signature. Painters can respond to this state of affairs in one of two ways: they can either make this perceived exhaustion of painting’s resources the content of their work, and play out the ‘endgame’ endlessly; or they can do as Wragg does, and assert that it is still possible to arrive at new content in abstract painting, through an unprogramatic, spontaneous, instinctive search for new ways of combining its known forms. 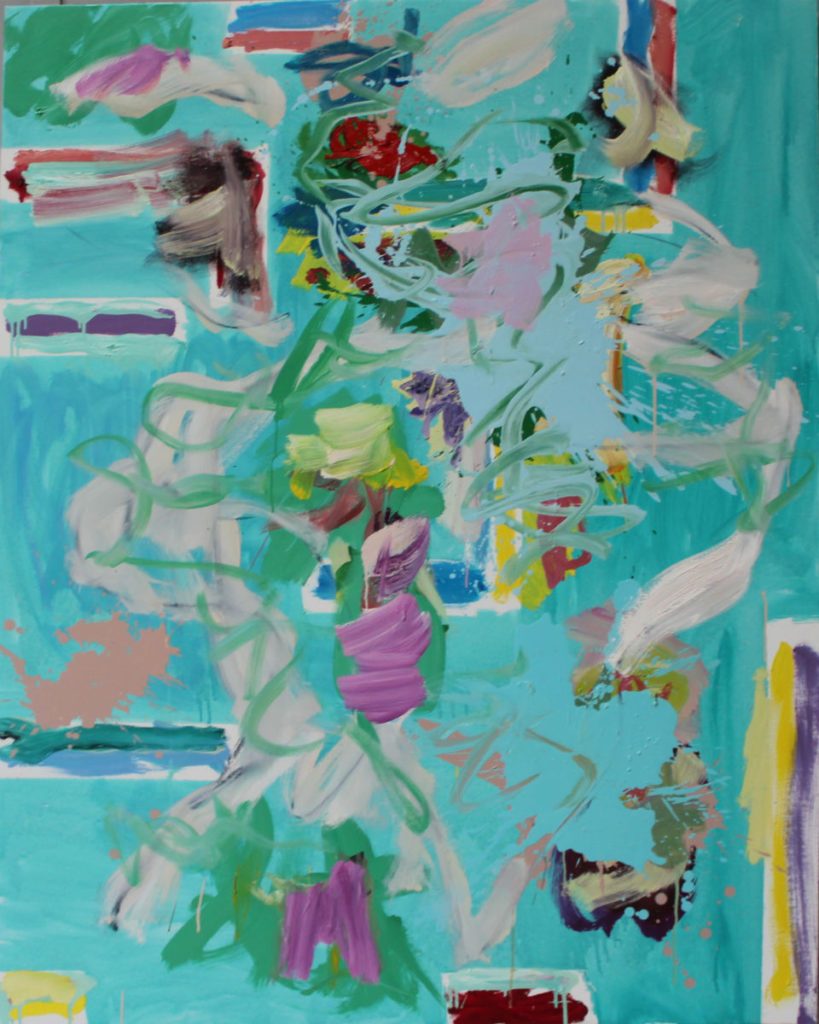 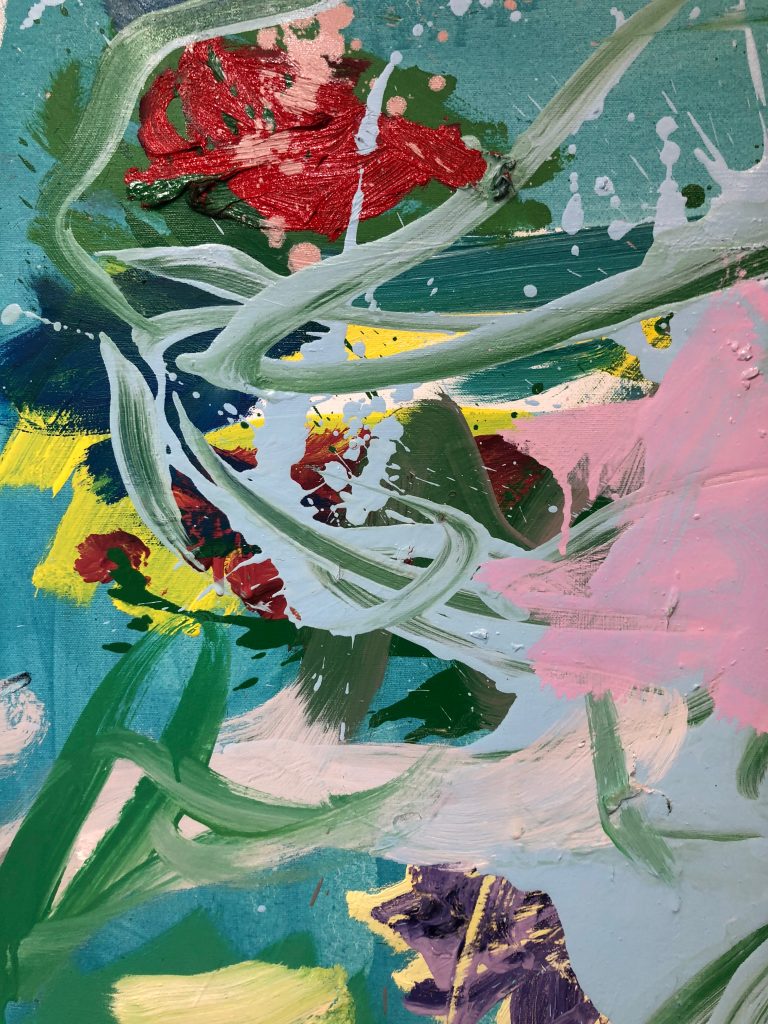 All of the large paintings in ‘Transformations’ make this attempt, and although they don’t all succeed equally, Wragg’s hit-rate is high. The groups of small works on paper, on the other hand, feel much less achieved than the canvases, for reasons that relate to matters touched on above: their small size seems to inhibit him, and the resultant clusters or all-over fields of marks, do give off a whiff of pastiche, however unintended. Wragg seems to need the room afforded by a large surface to get different modes of working to collide: in O T B D G, 5, Red and PL 5 he moves with the arm, the shoulder, the whole body, laying in armatures of thinned white and grey to yank the spaces and gestures of the paintings together; and in PL 2 and Untitled he brackets their busy central zones with a ‘floor’ and ‘ceiling’, of scribbled brushmarks in the former, and thick, jagged ‘V’s of white paint in the latter. Hit or miss, at all times, we are made to feel that in these large works all avenues into painting are open to him. 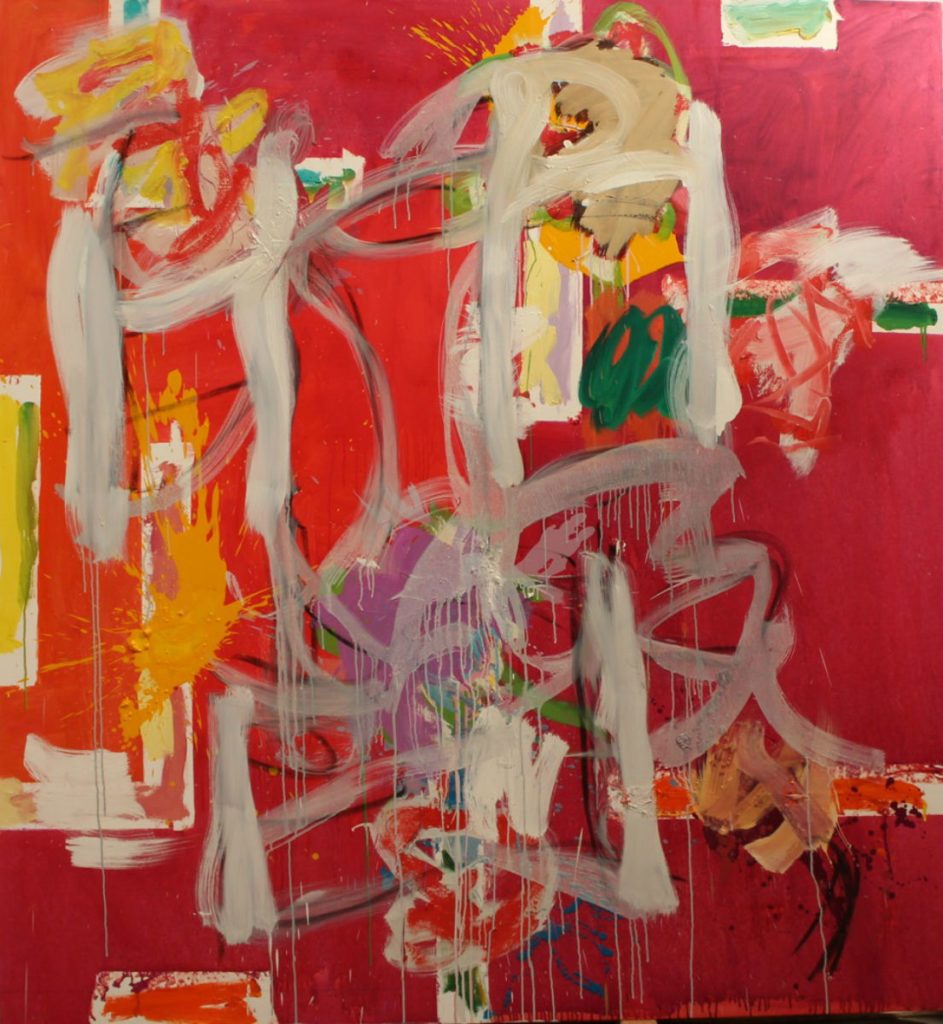 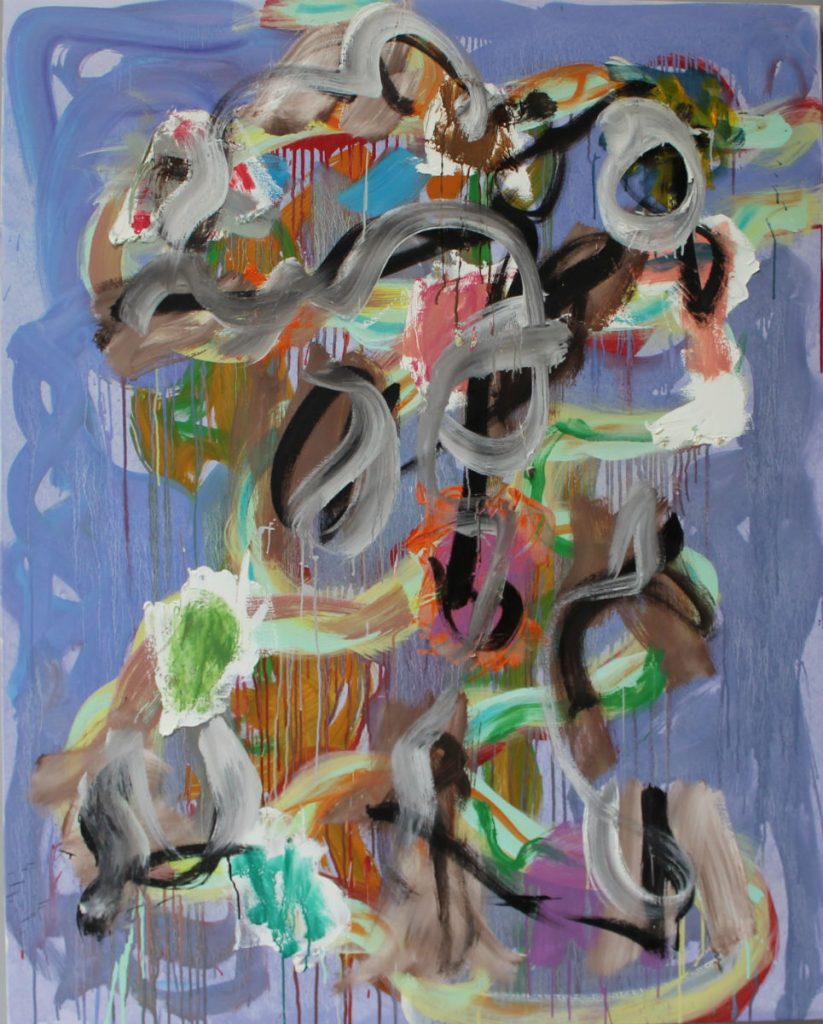 Sam Cornish, whose expert curation has paired the two artists’ work so effectively, has written about ‘bring(ing) the sculptures into the space of paintings’- and the effect of seeing the two kinds of artwork in juxtaposition, in that zone whose vertical midpoint lies somewhere around eye level for the average adult viewer, where traditionally only canvases hang, is an exciting two-way exchange, in which the high-keyed, almost floral palette of the paintings seems to tease brighter colour out of the sculptures’ dark foundry browns, blacks and dull silver-greys; and the constructed, part-on-part character of the sculptures highlights the architecture to be found in the paintings. Of equal importance to these formal relationships between the two artists’ work, though, is the sense this exhibition gives of a shared attitude: unimpressed by theory, untouched by angst, committed to the act of making.

‘Transformations’ comes down at 2pm on Sunday 27th May. Catch it if you can.