‘Kind of Red’: Frederic Anderson on the paintings of David Ostrowski 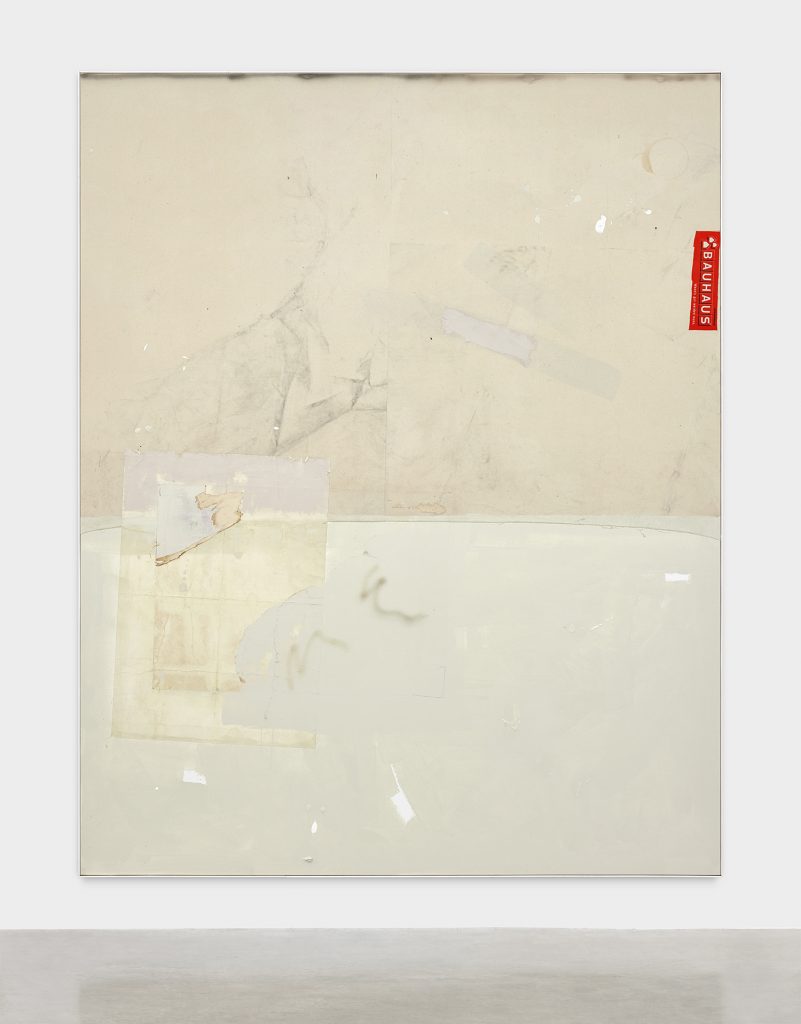 ‘My pictures are like me: often empty, full of emotions and with a penchant for suicide.’ 1‘Think Harder’, An exchange between David Ostrowski and Alex Bacon, 05/06/14, The Brooklyn Rail, https://brooklynrail.org/2014/06/art/think-harder-an-exchange-between-david-ostrowski-and-alex-bacon

This is one of the many mental images that kept resurfacing as I researched David Ostrowski’s work over the past year – empty, emotional paintings, teetering on the edge. ‘The Thin Red Line’, which opened recently at Spruth Magers in London, offered a much-anticipated opportunity to finally see his work in the flesh. The show is presented as a meditation on the colour red, which in an interview earlier this year, Ostrowski claimed to be on ‘bad terms’ with.2‘On Rejecting Professionalism’ – An interview with painter David Ostrowski, 15/03/18 The Creative Independent, https://thecreativeindependent.com/people/david-ostrowski-on-rejecting-professionalism/ Giving centre-stage to colours that the artist initially finds disagreeable to work with, on vast expanses of empty canvas, is one of many contradictions that runs through his practice. Red connects the pieces in this show almost like a game of tag, passed from one canvas to the next, adding heat, urgency and visual impact to otherwise muted compositions. The dynamic curation also contributes to this sense of contagion, with red paint running across canvasses stacked against the walls, suspended from the ceiling and even seeming to spill onto the floor, in the form of two limited-edition New Zealand wool rugs. 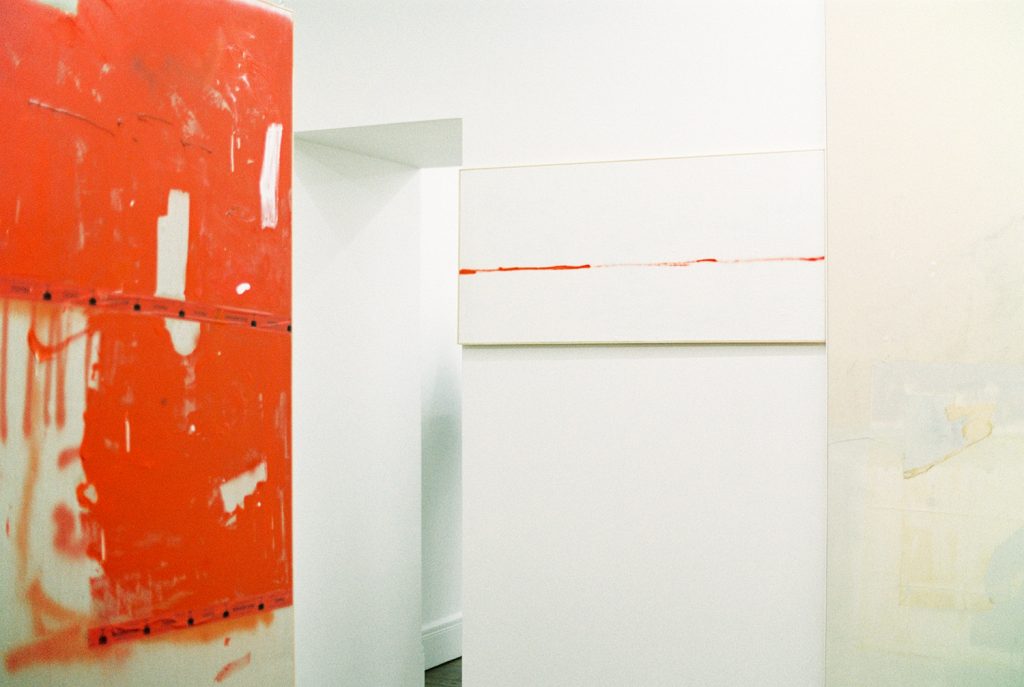 Ostrowski’s paintings feel in some way connected to those of his former tutor, Albert Oehlen. Stripped of the latter’s exuberant brushwork and cacophonous colour combinations, what remains is a kind of subdued underpainting – the bare bones of an abstract picture. At this level of reduction, each barely visible incidental mark, each accidental drop of paint, each footprint and each unintelligible scrawled sign, becomes a dynamically charged compositional element. Acting as abstract placeholders for what would have been saints’ heads, trees, sheep, crucifixes, and the power poses of angry Roman soldiers in classical paintings, these elements are nervously and yet confidently shuffled until a complex feeling of not-quite balance is achieved. Vying with the poignant emotional content of the work, it is this awkward and yet dynamically poised sense of composition that powers the pieces.

Ostrowski works quickly with fast-drying materials, and this lends the work its flavour of the artist’s studio. Whatever is immediately to hand, both physically and visually, gets sucked into the work – scraps of paper, painted offcuts of wood, paint tin rings, splashes of yellowed glue, fragile red packaging tape, Edding pen logos and dirt all find their place in the finished paintings. The studio becomes not only the place in which the work is made, but also a generator of imagery in its own right. The paintings also clearly draw inspiration from the street, from urban spaces, and from graffiti. In this aspect they share common ground with the spray-painted works of Christopher Wool: both artists re-enact the oppositional drama of the application and erasure of graffiti marks. Wool uses solvent and rags to dissolve and disrupt his swooping black lines, creating the kind of roughly-scrubbed-out clouds of residual pigment you can sometimes see on the sides of freshly-cleaned trains. Ostrowski, meanwhile, adds layers, gluing scraps of paper or applying whatever mismatched off-white paint happens to be at hand to cover the unwanted marks, in the manner of an uninterested community service worker charged with covering up an incessant proliferation of small tags on a wall. It is this layering of nervous abstract marks and rough concealer that doesn’t come across in photos of the work, and really needs to be experienced in the flesh. 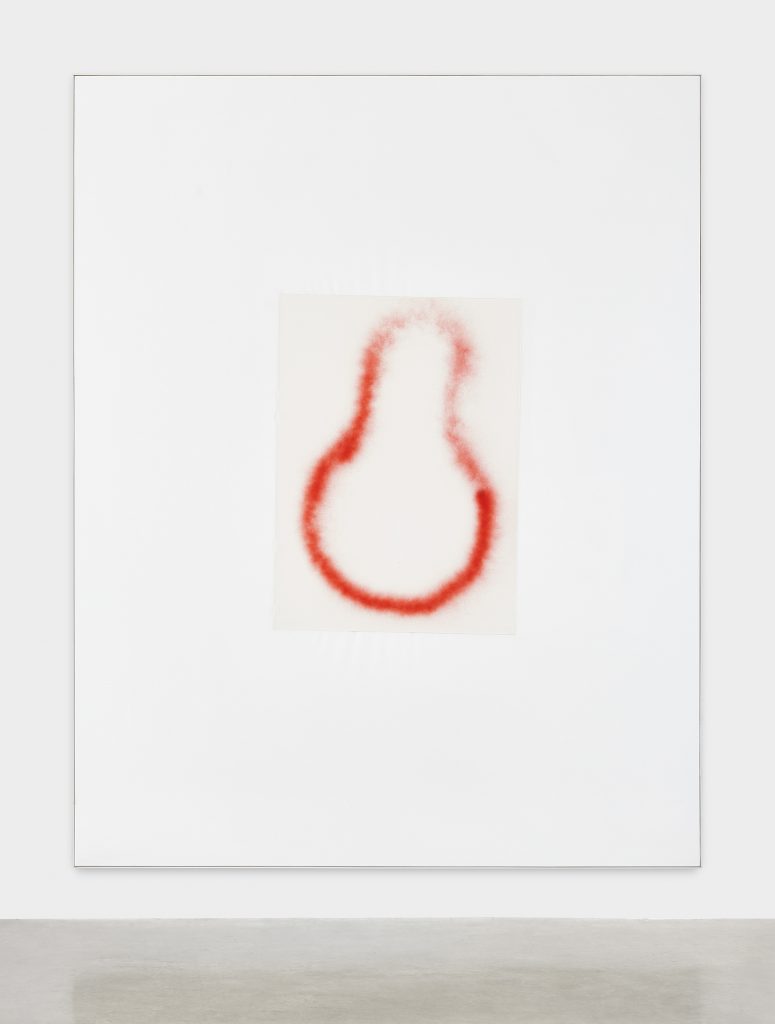 Suspended from the ceiling directly in front of the entrance into the gallery space is ‘F (The Truth Dawned Upon Him)’ (2017), a vast white canvas with a single large sheet of roughly cut white paper pasted onto its midsection, which in turn contains a single abstract gestural form in red spray paint. The painted line is nervous, sinewy, teased from the spray can. The edges of the paper and the canvas gently cradle the form within two subtly different voids of white space.  Close inspection reveals that the white paint has been applied quickly with a roller; it has texture and depth. The paper also seems hastily applied, with creases and traces of glue adding further nuanced surface detail. Despite the apparent speed that went into its making, the resulting painting has a meditative quality. The looped abstract form could be read as the initial stroke of a street artist who has fled the scene, but it equally has the quality of a contemporary version of a Zen circle, giving definition to the emptiness surrounding it.  The composition of the piece is perfectly balanced and yet also strangely edgy, as if made by a ‘right-handed person using the right hand as if it were the left hand’. 3‘Think Harder’, An exchange between David Ostrowski and Alex Bacon, 05/06/14, The Brooklyn Rail, https://brooklynrail.org/2014/06/art/think-harder-an-exchange-between-david-ostrowski-and-alex-bacon.

Hanging back to back with it is ‘F (Taktik an der Theke)’ (2017). If the first painting seemed to pose the question ‘how much can I subtract from this work for it to still read as a painting?’, the second seems to ask ‘how much can I add for it to still read as empty?’. The first is contemplative and subtle, and largely white, whilst the second is aggressively red. Similarly energetic marks in other, white-painted works barely register as they melt into previous layers of white. In ‘F (Taktik an der Theke)’, the trace left by every hair in the brush is starkly highlighted in the scarlet paint racing patchily across the surface of the raw linen. Hanging in the window of bare canvas on the left half of the painting are hooked spray-painted lines that could be testers for the sprayed form in ‘F (The Truth Dawned Upon Him)’. Another example, perhaps, of the artist ‘using the right hand as if it were the left hand’, these unselfconscious lines are delicate, fresh and revealing. The third element of the piece is a strip of red ‘fragile’ packing tape that cuts the top half of canvas in two. As in ‘F (The Truth Dawned Upon Him)’, these three elements actively work together to make a finely balanced image that is both finished and raw. 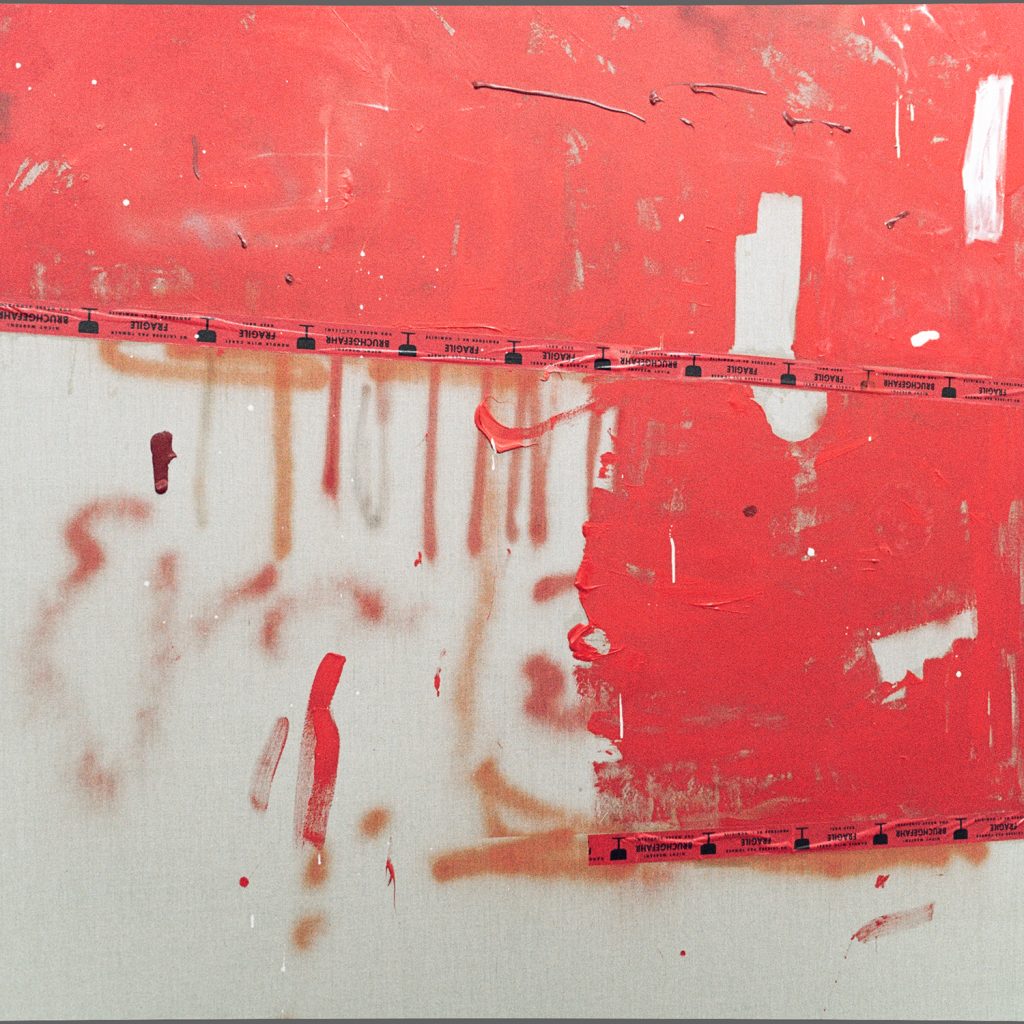 Opposite ‘F (Taktik an der Theke)’, on the back wall of the gallery space, hangs ‘F (Kolner Frauen Schlagen Alarm)’ (2017). Of the three canvasses, this one is the most ‘worked’. Similarly to the others, it resembles a section of wall artfully lifted from a derelict building. Mostly white, with the ‘Thin Red Line’ of the show’s title running across the bottom over a rectangle of raw, fresh plaster-tone paint, it has the most beautifully nuanced and curiously ‘active’ surface of all. Small, sketchy graffiti marks either float on the surface or are buried under heavily-applied swatches of paint or collaged scraps of paper in a symphony of not-quite-whites. This painting in particular feels like a love letter to unloved places. The finished painting creates an extraordinary sense of tension in which even the tiniest incidental mark plays a crucial role in the overall composition of the whole.  If Albert Oehlen’s paintings are gregarious, bombastic symphonies of colour, Ostrowski’s works are partitas for solo violin, in which every melancholy nuance of tone and emotion is exquisitely heightened: ‘I seek to achieve the highest possible emotion with the simplest, fewest possible means.’ 4‘On Rejecting Professionalism’ – An interview with painter David Ostrowski, 15/03/18 The Creative Independent, https://thecreativeindependent.com/people/david-ostrowski-on-rejecting-professionalism/

The kind of working methods Ostrowski employs inevitably give rise to a vast number of failures (the ‘F’ in the paintings’ titles stands for Fehlermalerei or ‘failure paintings’). This is the artist trying to outthink himself, or rather to paint faster than he can think, and in doing so generate surprise, and something new. Layers of failure are patched, cut and pasted, scrawled and erased until a state of uneasy completion emerges. This is rabbit-in-your-headlights painting, with the artist and the painting constantly switching between the role of rabbit and the role of headlights. 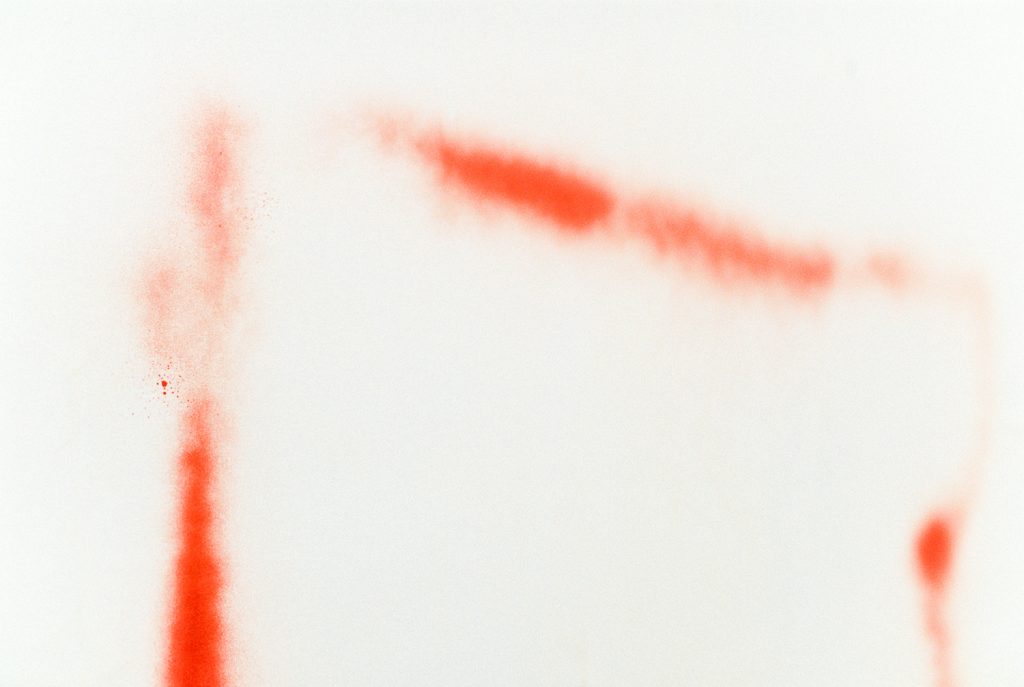 Ostrowski often gets cited in discussions about ‘endgame’ painting5 ‘David Ostrowski: Yes or Let’s Say No’, artreview.com. 28/11/13. https://artreview.com/reviews/march_2014_review_david_ostrowski/ (referring to the end of chess games in which only a few possible moves remain). Ostrowski has stripped the elements in his paintings back to the bare minimum, and in doing so has potentially cleared a new space in which to build. In the same way as the gestural swirls of 1980’s Artex ceilings can be oddly revealing of the state of mind of the person that made them, by having removed everything superflous, Ostrowski’s works are vivid windows onto the artist’s inner emotional states. 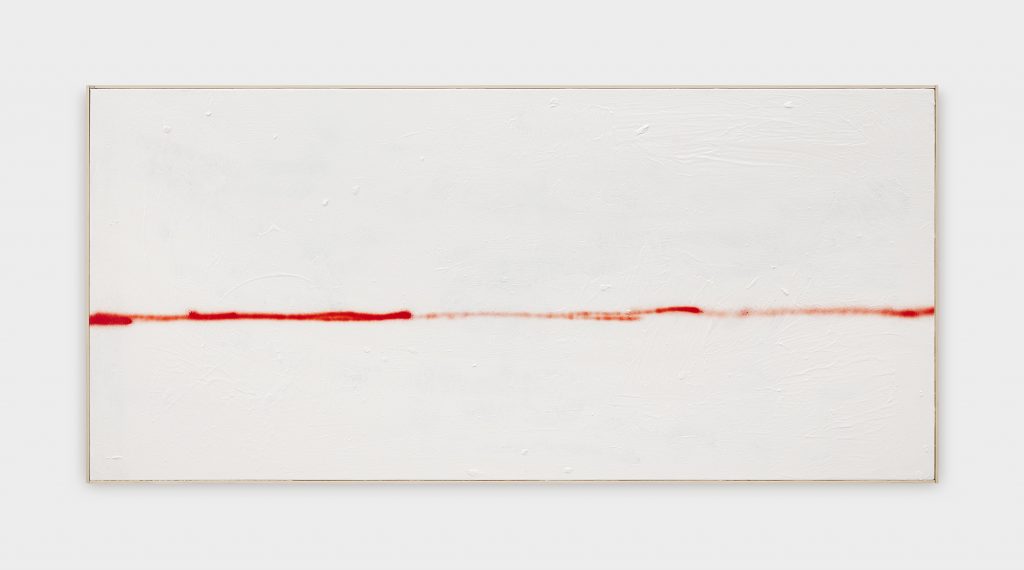