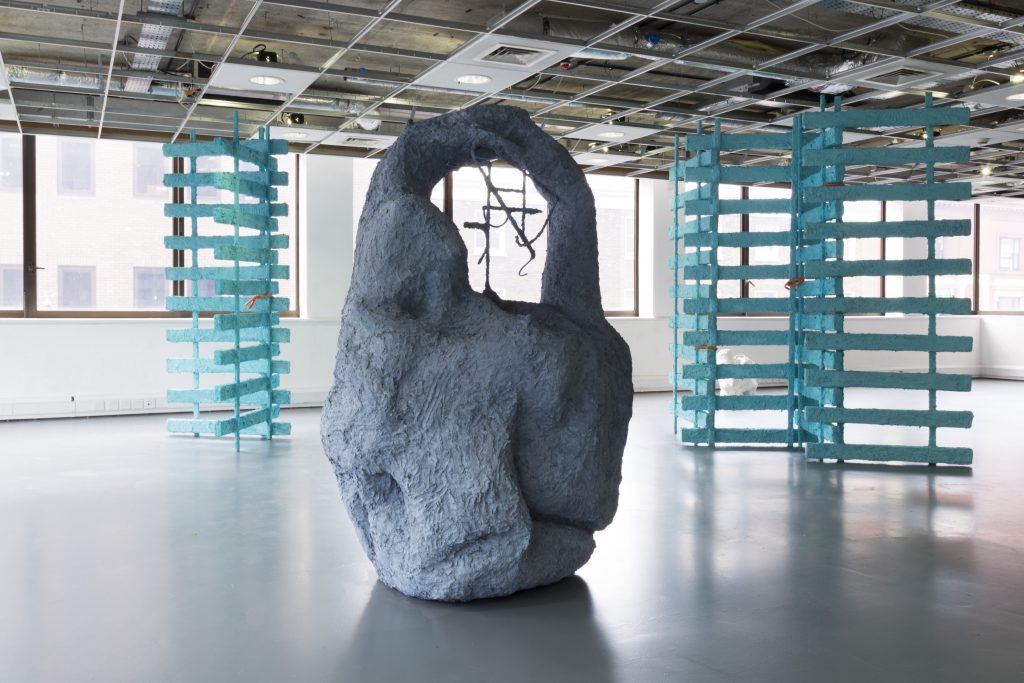 Upstairs at 93 Baker Street, at large, a mini-survey of recent sculpture by Olivia Bax. The former office space has been temporarily taken over by VO Curations. A series of short-running exhibitions are planned, until the building is redeveloped. 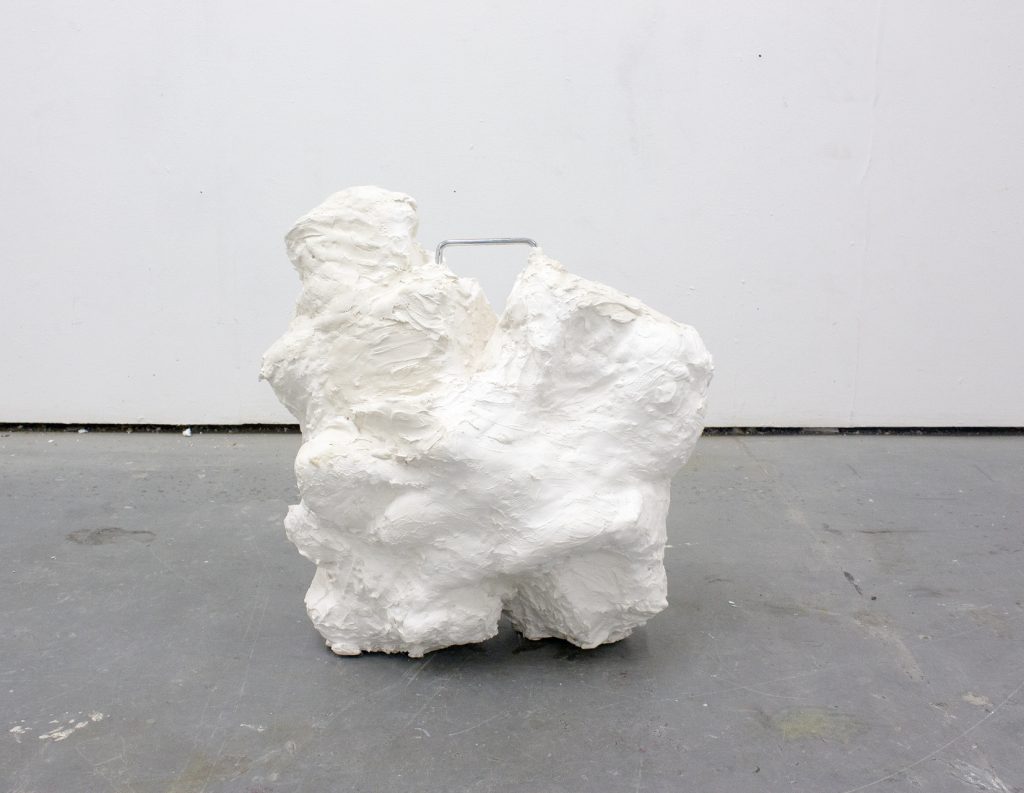 The overall impression is a comic wonkiness. Boulder (with Handle) (2015) bulges jauntily, yet seems somehow uncomfortable in its own skin. The handle jammed in the top suggests that the sculpture has just been put down, or could be picked up and walked off with. Roar (2018) knocks its knees together, as if in need of a piss. Closer inspection of the striking Constructivist geometry of Slot and Groove (2015) reveals its straight lines as out of kilter with each other; a fact which somehow increases its purchase on the surrounding space. Love Handles (2017) and Pump (2016) have the air of discarded props – their purposelessness given a twist by the weird sense of life in their thick, cartoon-limb lines. 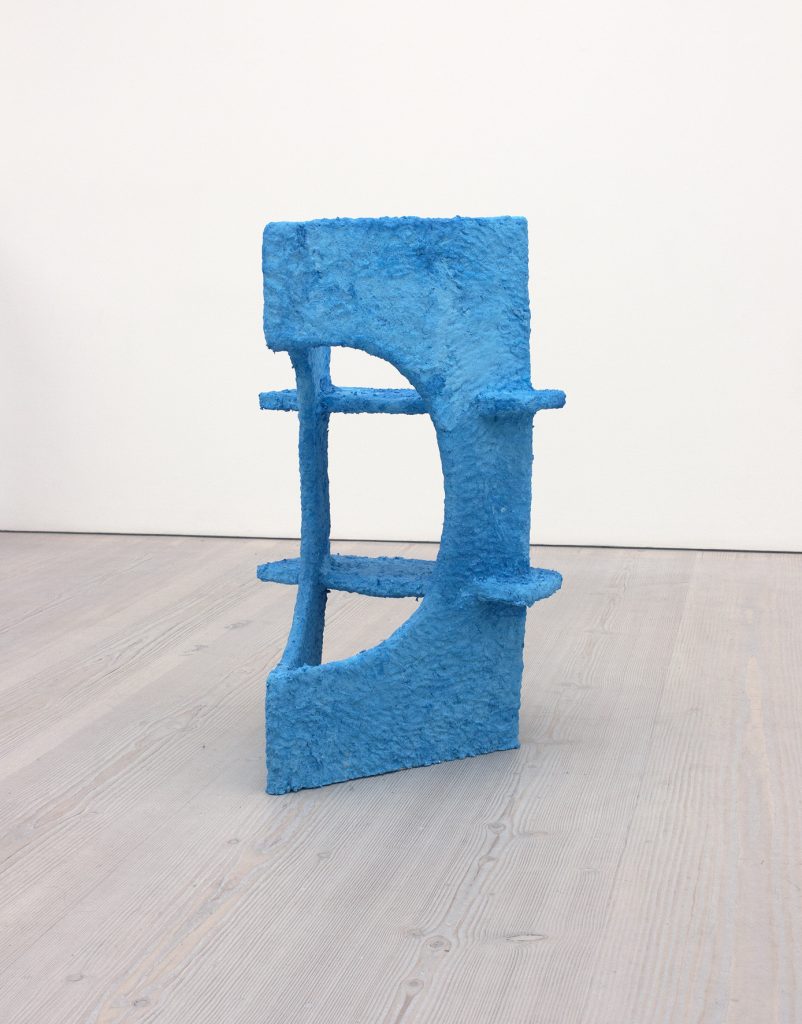 Humanity in cartoon guise runs through Bax’s work. Her sculptures are personages, however distantly they evoke the body or (more commonly) its parts. Frequently appearing handles are the most overt of the ways she seeks involve the viewer in this cartoon-world, so that the sculptures seem like odd extensions of ourselves; the implication being that there is something inherently mismatched, out-of-sync and funny in our involvement with the things we surround ourselves with, sculpture included.

Colours approach cuteness but veer off towards the appealingly unappealing. A mouthwash turquoise, a dull mustard yellow, a kind of electric blue, and one closer to well-used Blutack. In most cases colour covers a rough layer of pulped paper, that in turn covers an armature of steel and chicken wire. In all of the works made this year, the steel emerges from the pulp-paper casing as an independent element in its own right. Together, colour and texture simultaneously signal and subvert physicality. This is not a tactility that invites touch, or that one would seem likely to gain much insight from. The surface activity of Bax’s sculptures remains on the surface, without much implication that it registers an unseen internal pressure. This perhaps explains why the armature has been revealed, and why a number of this year’s works take the form of vessels, in which surface can say something more about volume. 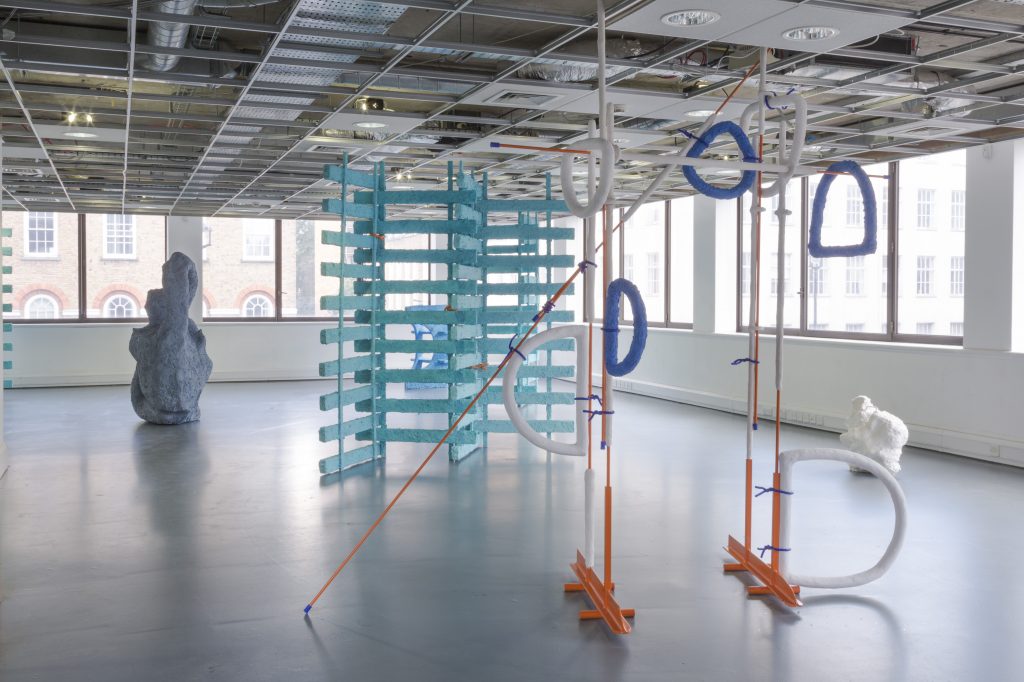 Sometimes the absurdity seems a little forced, as with the precariously-balanced, Swiss-cheese holed slab of Pow (Table Top) (2016-18). The same could be said of the mock-monumental Footloose (2017), specially adapted to fit the ceiling height at 93 Baker Street. Palisade (2016), here shown divided into three sections, felt inconsequential. Bax is more effective when she adopts a somewhat oblique approach, one that allows her to foreground the telling detail, so that it pops out against the whole to just the right degree. There is an attractive neatness here, that nips, tucks and playfully diverts the grosser physicality of precedents such as the work of Franz West or Angela de la Cruz (or the more rough and ready improvisation of a contemporary such as Jonathan Wallbank, who, like Bax, worked as an assistant to Anthony Caro). I think some might see the nipping and tucking as overly cautious; but this, for me, is what gives Bax’s work its distinctiveness, and, as with the skew-whiff geometry of Slot and Groove, its purchase on space. 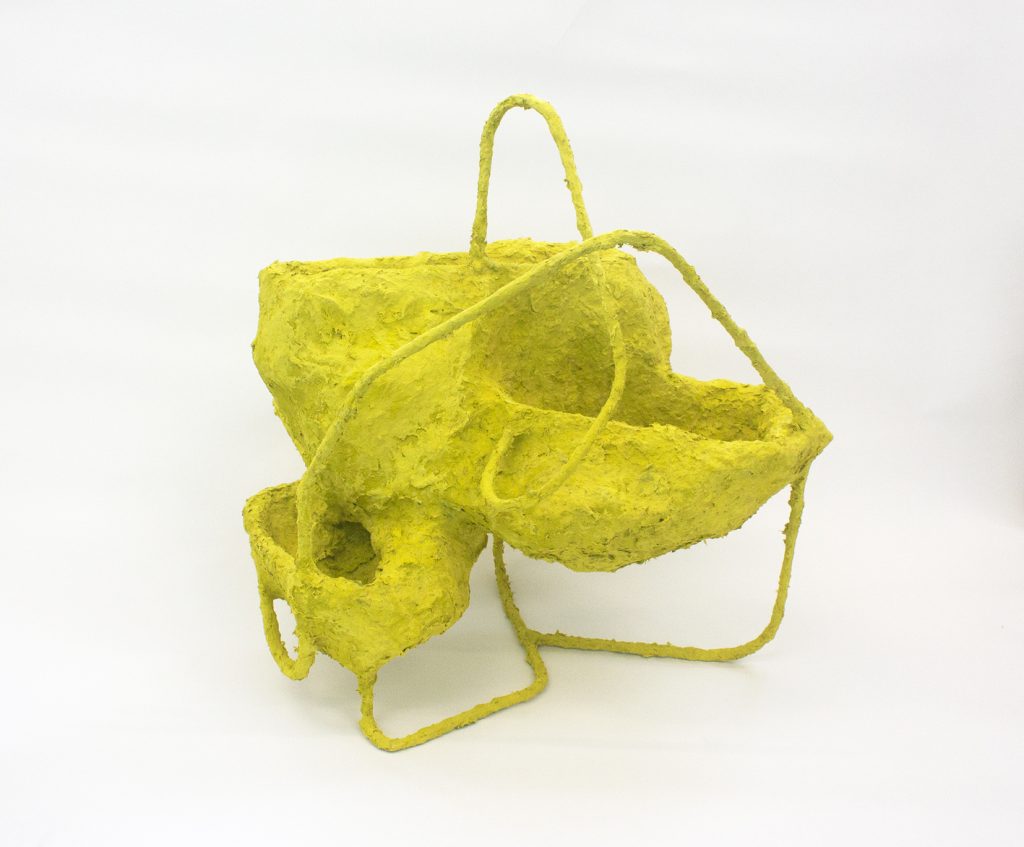 Emerging from the sculptures’ volumes, the steel armature has allowed Bax to introduce more complex drawing to her work. In Roar, and the related Rumble (2018), drawing is framed by the sculptures’ volumes. In the three small vessel sculptures – Air Pocket (Three Graces), Air Pocket (Yellow) and No Smoke Without Fire (all 2018) – there is a greater interaction between line and volume. It is tempting to write about line articulating the space around or between the sculptures’ volumes, and it is partly true, but the effect is not quite so straightforward. Line, especially in Air Pocket (Yellow), traces a wayward path, misdirecting as much as it articulates. Perhaps we could see it as a fumbling  encounter with an unknown object, whose purpose and orientation were only partly understood. This awkward articulateness is central to Bax’s work.