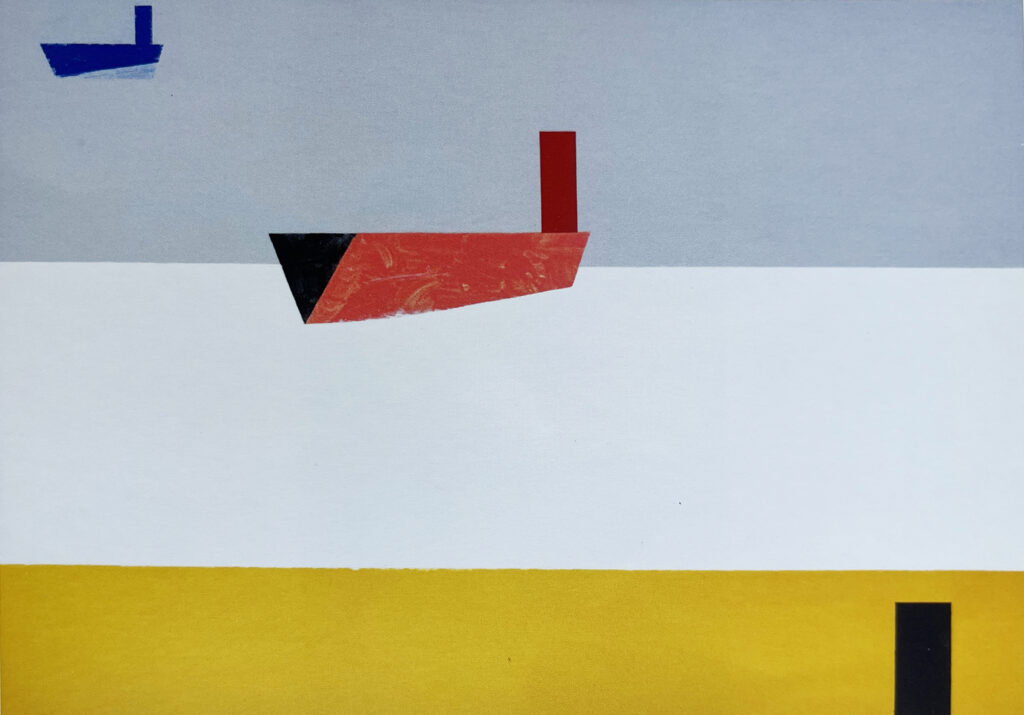 It’s been a fair few years since Kapil Jariwala traded in the white-cube stylings and west-one postcode of his central London exhibition space for the walls and stairwells of his narrow terrace house in Camberwell. A bold move, to up sticks and move out of the neighbourhood where a good part of the capital’s serious art-business has traditionally been done; but travelling across London to visit on an August day of blinding light and searing heat that transformed the city centre into a fiery vision of hell, Instantloveland didn’t feel in the least bit inclined to query the wisdom of his decision, especially not when the carefully-tended spaces of his home, and the spaces in the paintings by David Webb currently adorning them, seemed to offer a welcome weather all their own: cool, airy, ineffably silent and still. 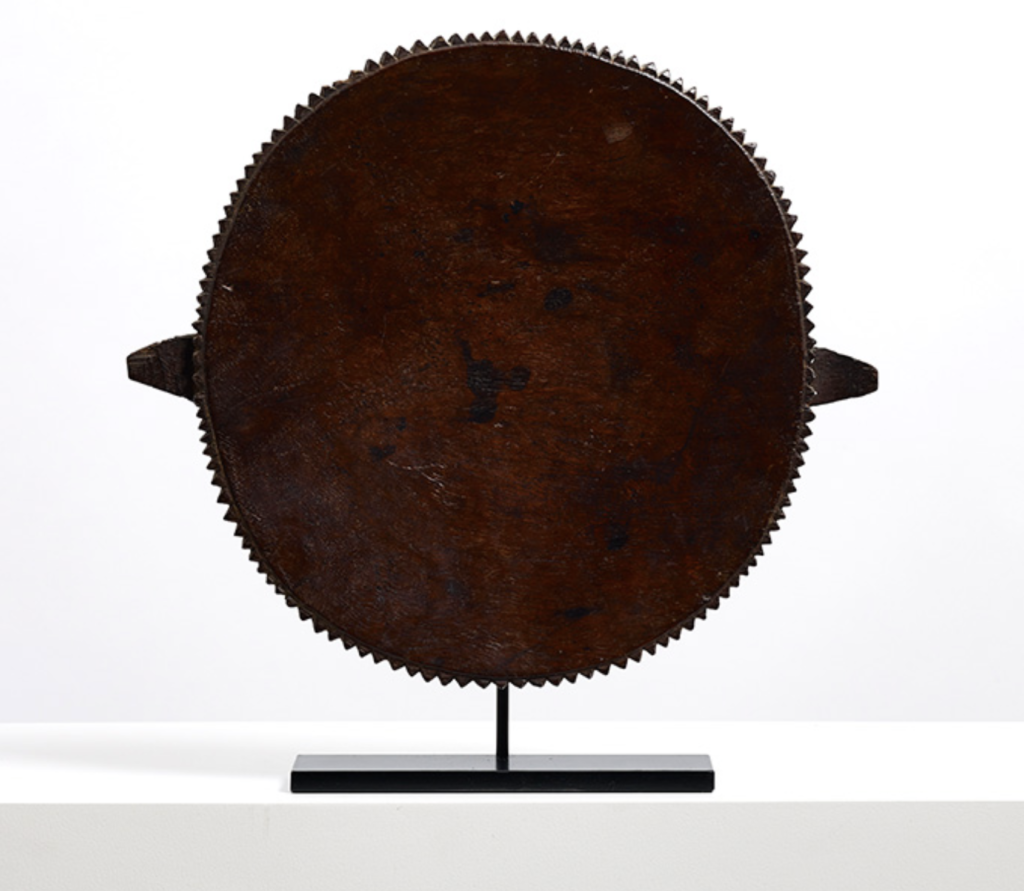 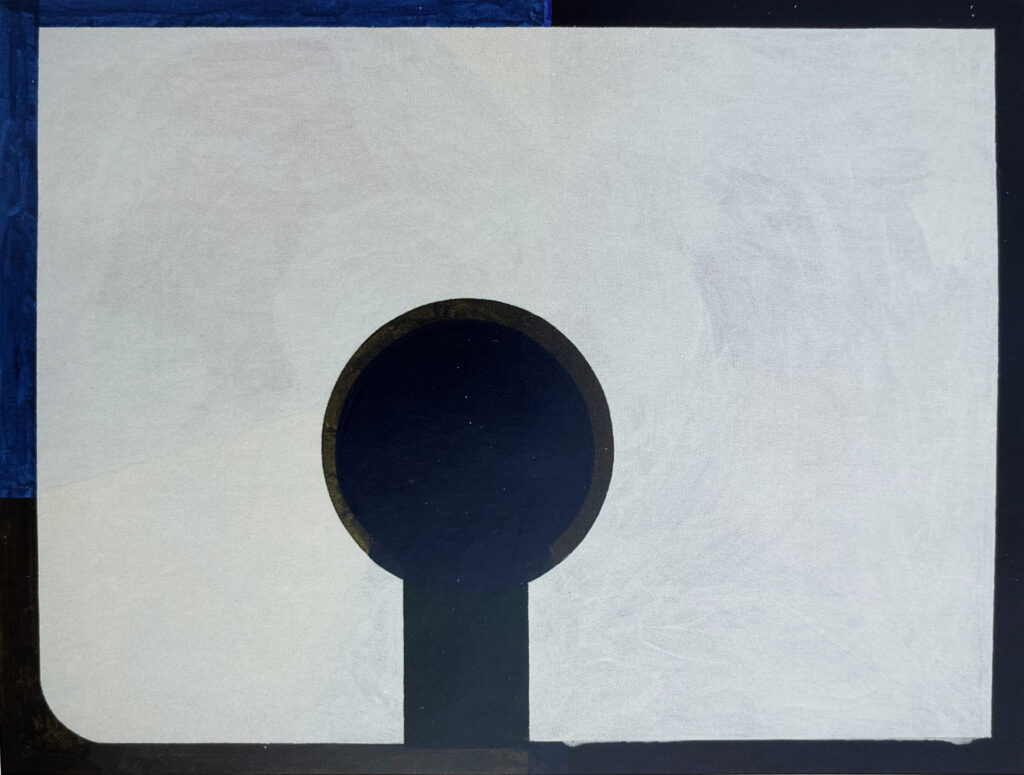 Twenty of Webb’s works from the last ten years currently share the house with Indian, oceanic and tribal artefacts, filling the hushed rooms with silent dialogues between the flat and the free-standing, between painted and real space, between now and antiquity. That so many affinities are clearly on show, that so many of the forms in the paintings echo or rhyme with those of the hand-crafted things surrounding them is hardly surprising: Webb has looked extensively at tribal art, folk art, and ritual objects, and absorbed the lessons of their stark, declarative geometries, just as he has the shapes and symmetries of game boards, and the forms of modernist art. 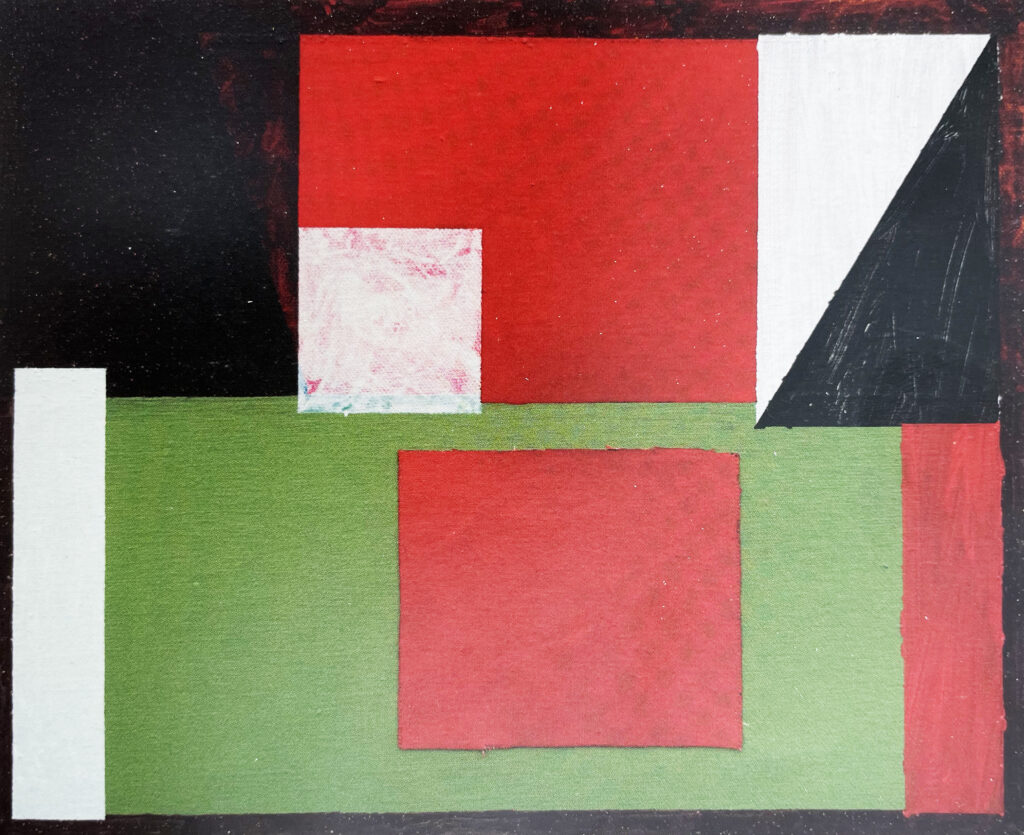 What’s striking, though, about these paintings is how tentative they feel, as if one could look away from them for ten seconds and look back only to find the forms had shifted, or dissolved: the black circle with a rectangular ‘neck’ in ‘Rue de Pluton’ is drifting off-centre; the ghostly white square in ‘Lemba Nocturne’ seems to be dropping down through the painting; the fuzzy black and pastel shapes in ‘Untitled (Pink)’ are about to blow away like coloured smoke. Webb locates himself as a painter within touching distance of Modernist art, but here, there’s none of the eye-grabbing impact of full-saturation colour to be found in a Mondrian, or a Hofmann: when Webb deploys the primaries, as in ‘Lemba’ or ‘Lemba (Tree)’ the thinned acrylic pigment, half spread around, half pushed aside by the movement of the brush, concealing and revealing the paint layer beneath, is just barely there enough to say ‘red’ or ‘yellow’ or ‘blue’. 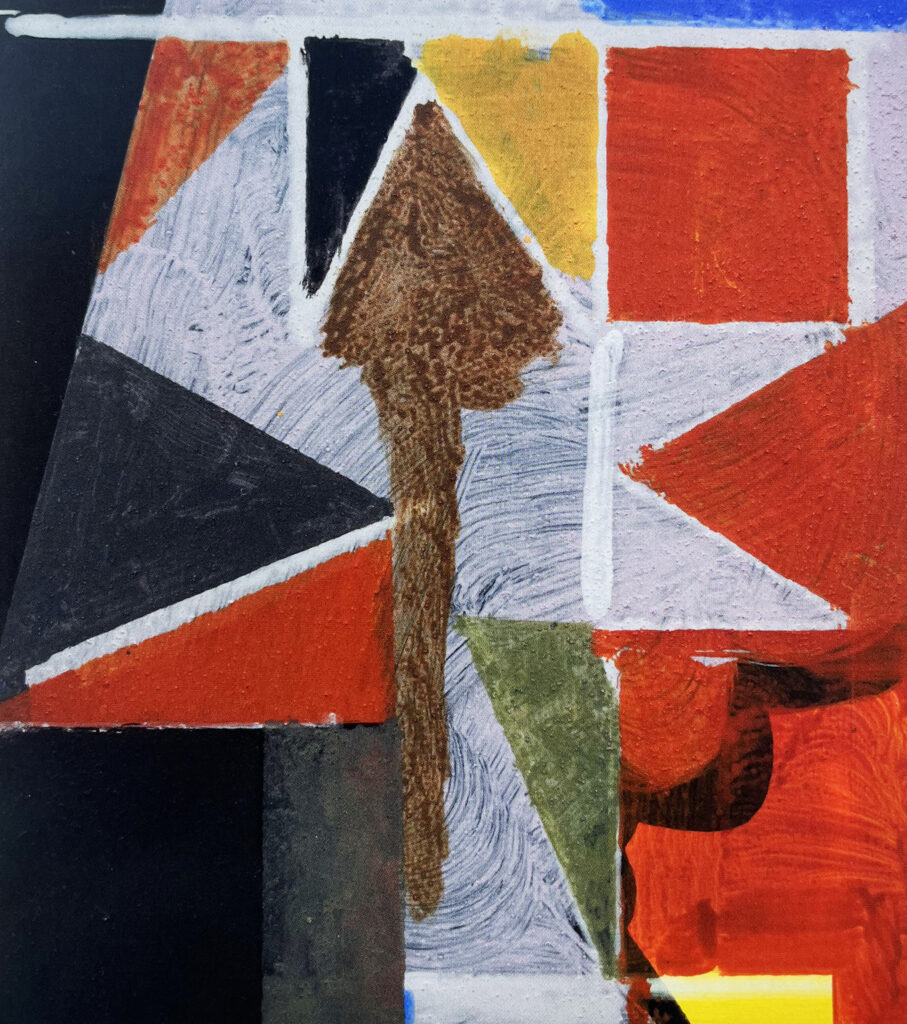 It’s this extreme diffidence in how the paintings’ forms are rendered and deployed- rather than the forms themselves- that is, in a sense, their real content. In some, the paint seems to be building towards an image; in others, it seems to be dismantling it. Either way, the ‘how’ of the paintings- their brushed paint seeping here and there across masking-taped frontiers, their hard stencilled edges, their corrections and alterations that draw the eye to the form being corrected or altered- is in every instance as fully present as, or more present than, their ‘what’– the sense of a row of rooftops, or the curve of a hill.

All this emphasis on process provides Webb with an alibi: if the paintings’ forms appear about to topple over into illustration, or postmodern pastiche, their facture is there to reassure that what’s happening is also busily un-happening, that any intimations of figuration are simply a side-effect of the passage of the brush, and that there’s no need for alarm. In ‘Galata (Blue)’ the schematic ‘head’ atop a triangular torso is so redolent of the work of the makers of modernist totems with a surrealist twist (Picasso, Giacometti, Miro, David Smith, William Turnbull…) that one could almost imagine its gaping half-circle ‘mouth’ listing them out loud; but then the eye picks up on the way the form’s straight edges faithfully follow the diagonal and horizontal axes of the square canvas, and how a single flick of the blue paint has strayed into the white, and how the blue/black border corresponds with the width of the tape that masked it out, and straight away the etiquette of making is reasserted, image gives way to thing, to self-referring and self-enclosed object. 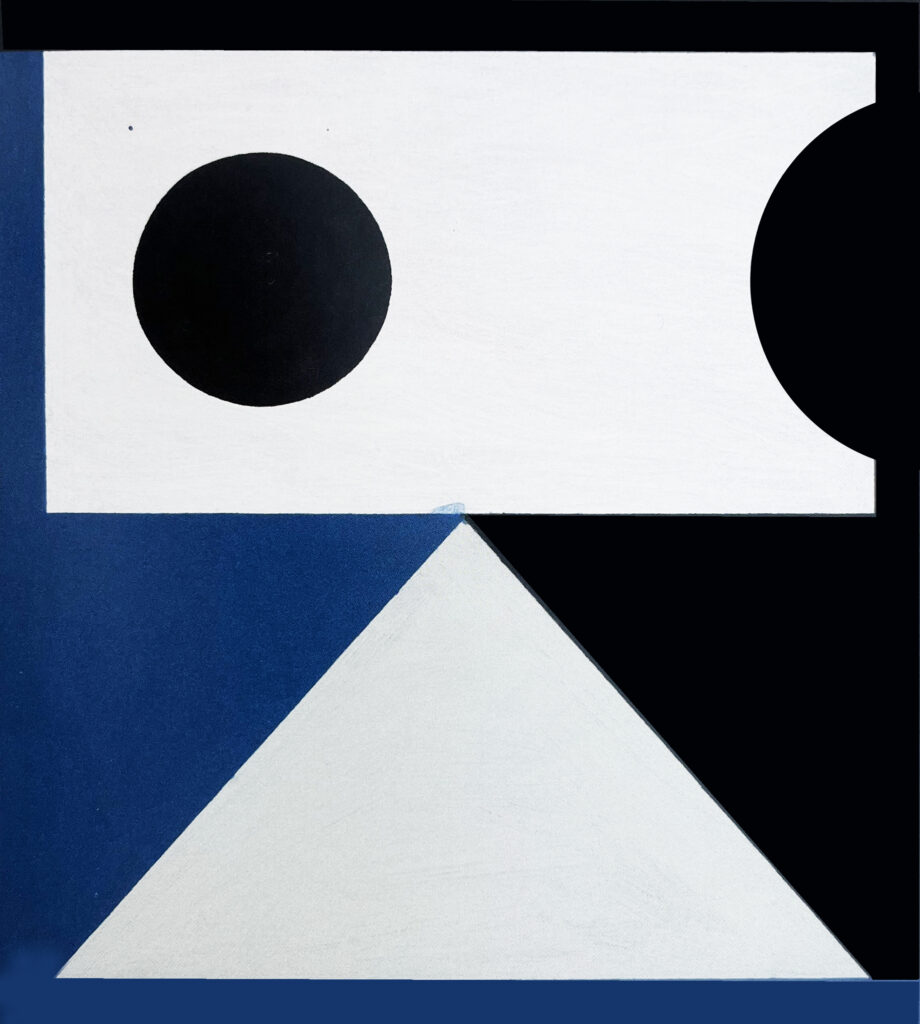 However, this way of making paintings is not without risks. The criticism often levelled at Richard Diebenkorn (another painter whose aesthetic leans heavily on the cumulative effect of countless brushy adjustments to geometrically-divided zones of thinned colour), could be levelled at Webb as well: that the work can, in places, feel suffocated by its polite restraint, its genteel good taste. The occluded and overpainted forms in ‘If You Jump Awake’ (at four feet tall, the largest painting in the show) seem to be straining after suggestiveness, but don’t deliver: there’s no friction, no spark for the visual imagination, in its vaporous brushwork, its tidy contours, and the greyed-out blandness of the surrounding field.

This is where Webb’s painting could go; but where- arguably- it should go is perhaps best demonstrated by the most achieved of the small, compact works on display, in which all questions of taste seem to go by the board, and the attempt to impose structure and decorum ignites the painting, rather than damping it down. The eight-inch diameter tondo, ‘Untitled (After DC)’ locks its hard-edged, liquid-centred ochre forms in tight, generating an almost fetid heat between them and the enclosing midnight blue; and then there’s ‘Limassol’, where the children’s-colouring-book indexicality of its primaries, grey, black and white colour scheme feels at once blindingly obvious and wonderfully evocative, creating a poetry of flatness and depth that persuades by virtue of its sheer quirkiness. 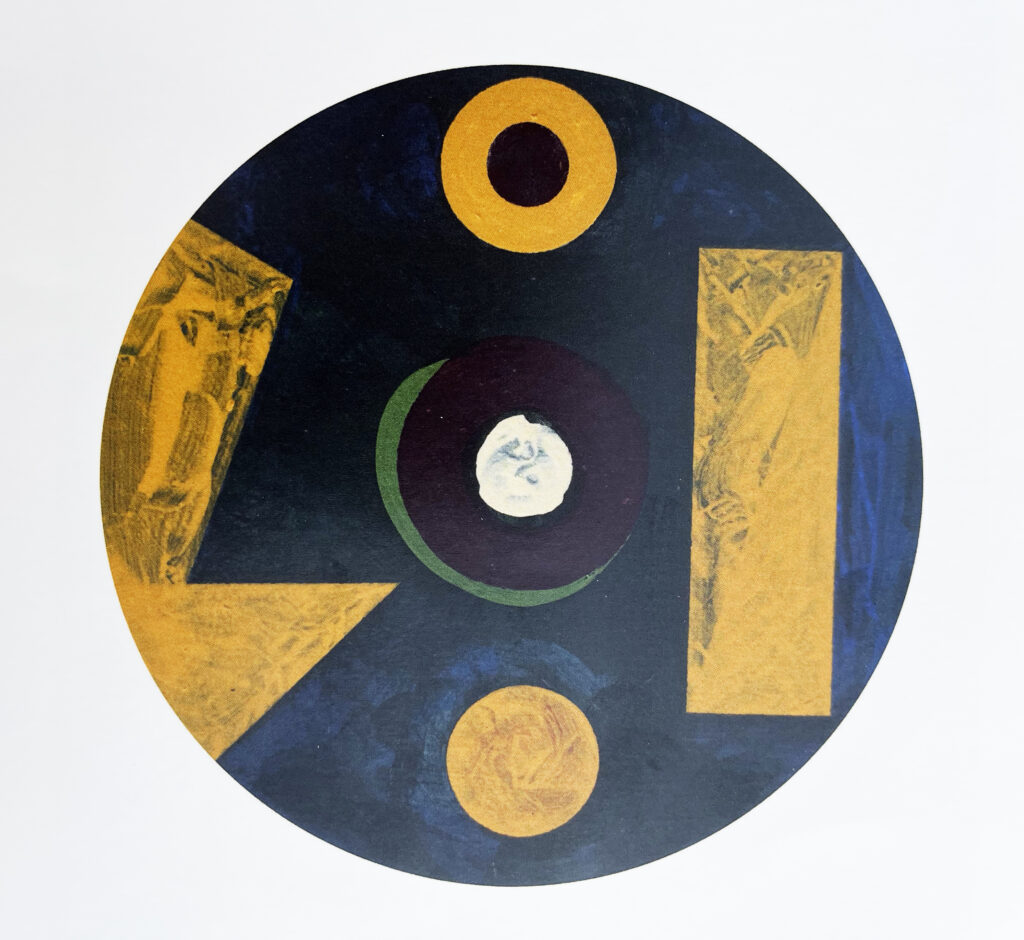