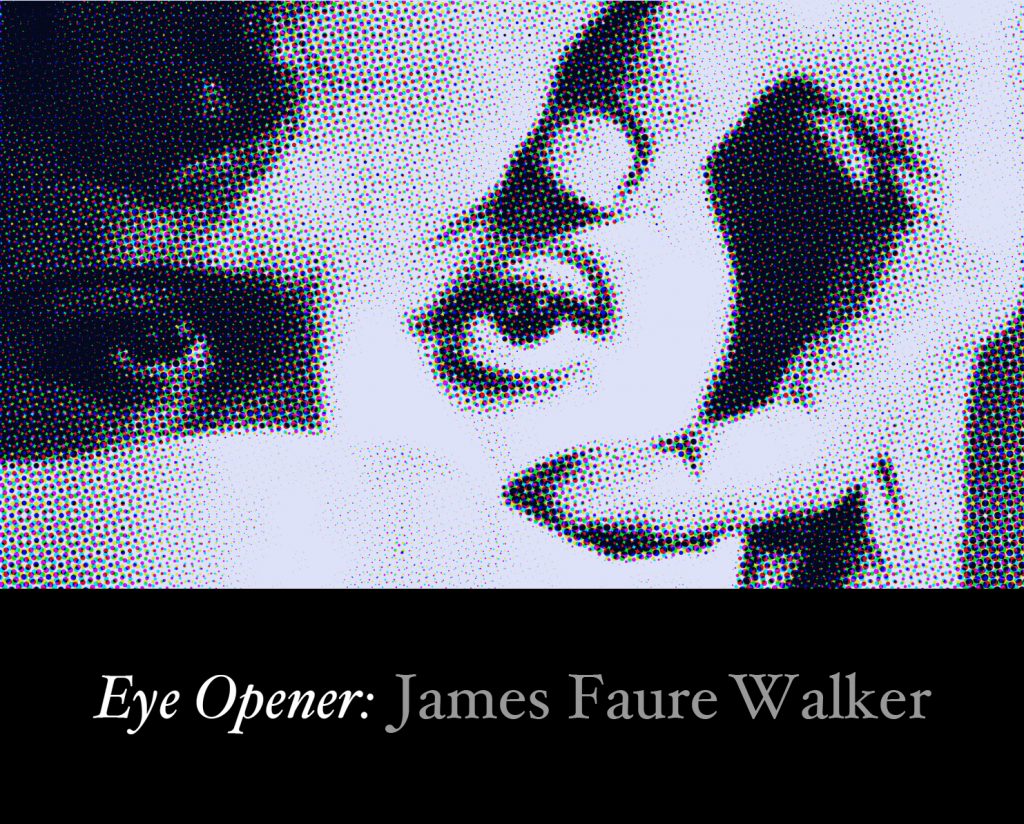 In the second instalment of our new feature, it’s the turn of British artist and critic James Faure Walker to describe the art and artefacts, from the ancient to the contemporary, that have helped shape his painting and his thinking.

The first paintings that I really looked at were reproductions in Oliver Warner’s ‘British Marine Painting’. I copied them using a Rowney’s oil painting set. I was about ten years old. My brother had won the book as an art prize. For a while it was all storms and seascapes. I imitated a French postcard artist called Yvon, waves foaming over rocks, done with a wild palette-knife. Turner’s 1805 ‘Shipwreck’ in the Tate brings it all back. Wonderful. 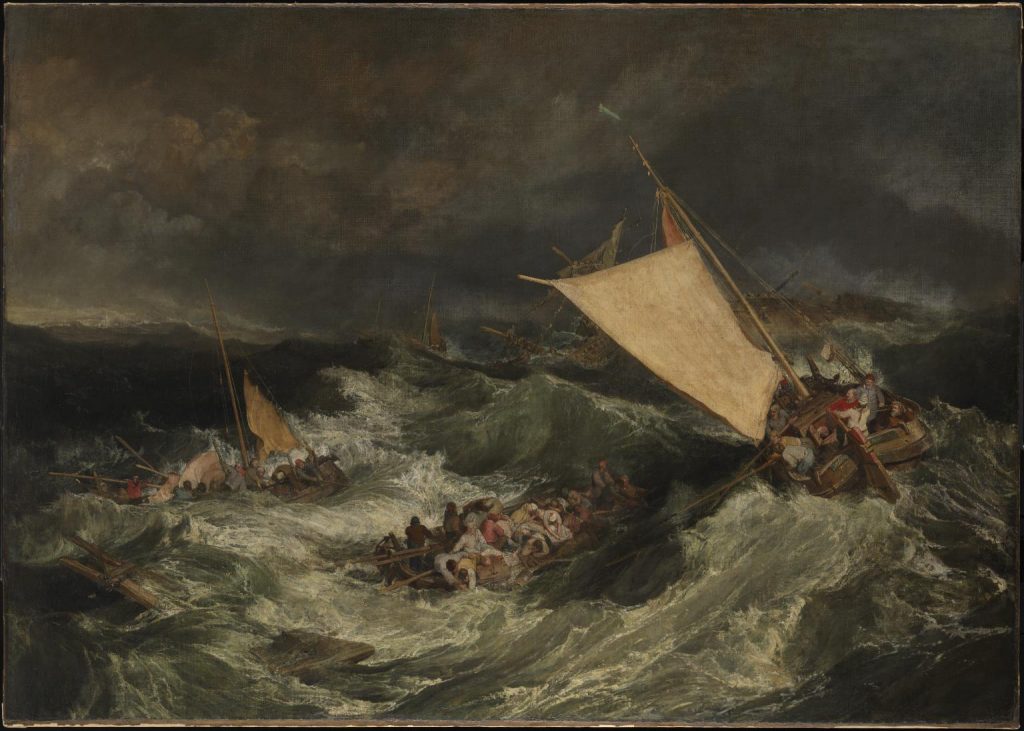 Surprises happen when travelling. As a student at St Martins I hitch-hiked to Florence. In the Brancacci chapel it wasn’t the Masaccio ‘Tribute Money’ that stuck in my mind, but the fresco opposite: Filippino Lippi’s ‘Crucifixion of St Peter’. Three figures are framed by an arch, witnessing the execution. One is turned towards you (probably, I now realize, a portrait of Botticelli). He makes eye contact. It makes you complicit. 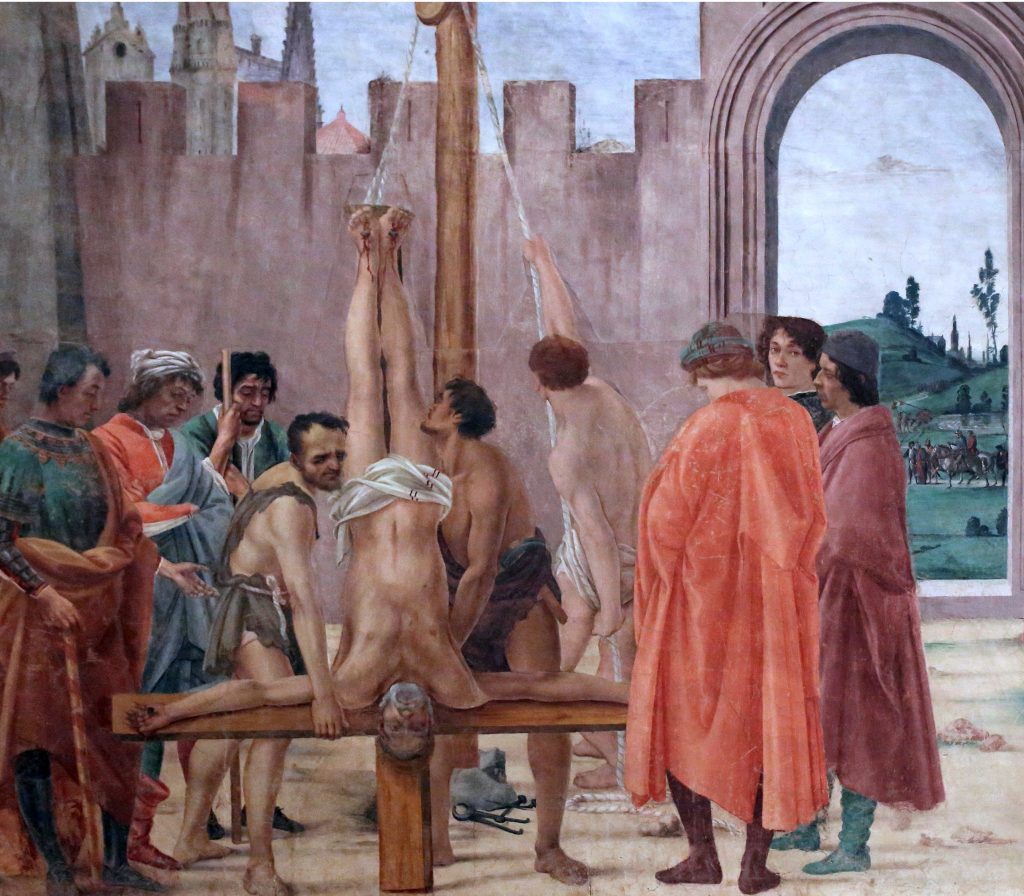 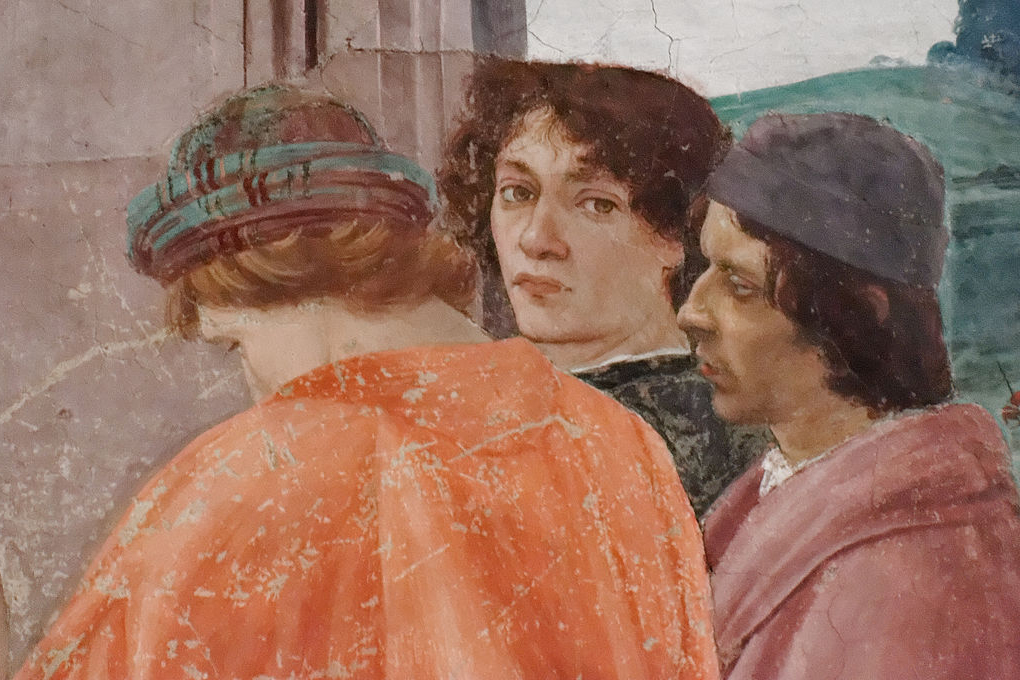 Panofsky’s ‘Early Netherlandish Painting’ introduced me to those peculiar interiors loaded with iconography. I think of carpentry, perhaps because of Joseph on the right of  Robert Campin’s ‘Merode Altarpiece’ in the Cloisters, New York. There is timber too in Rogier van der Weyden’s ‘Deposition’ in the Prado, a Picasso favourite, and up there with ‘Las Meninas’, and ‘Les Femmes d’Alger’. Decades later, I was in Germany a few times, and discovered the Cologne School, especially Stephan Lochner. ‘The Martyrdom of the Saints’ is exquisite – sugary and gruesome. 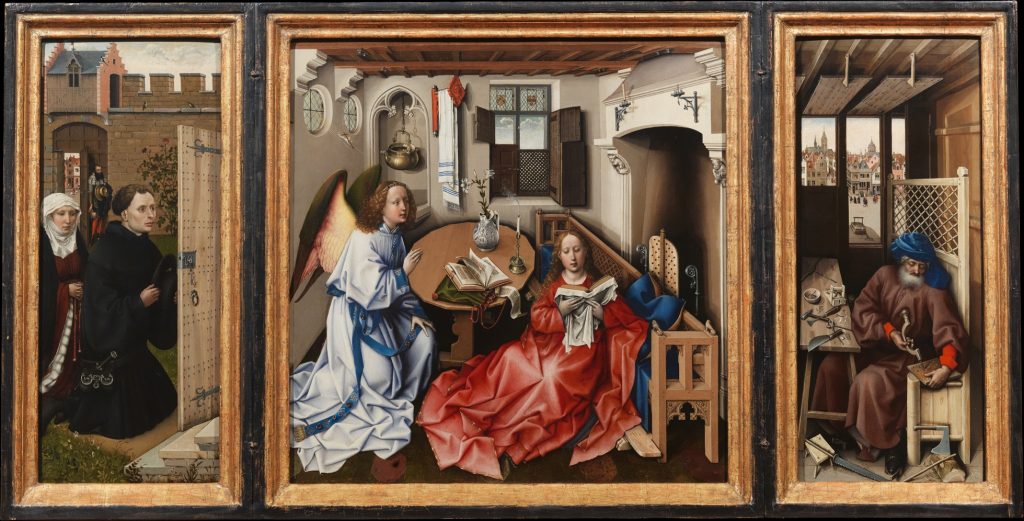 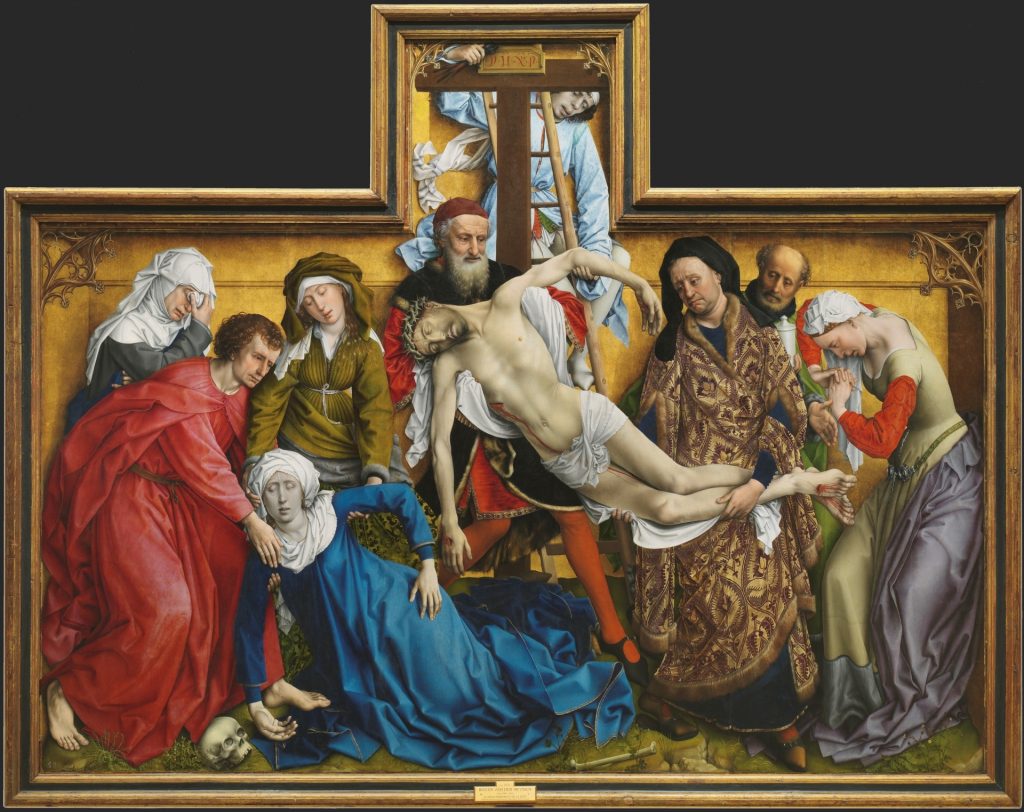 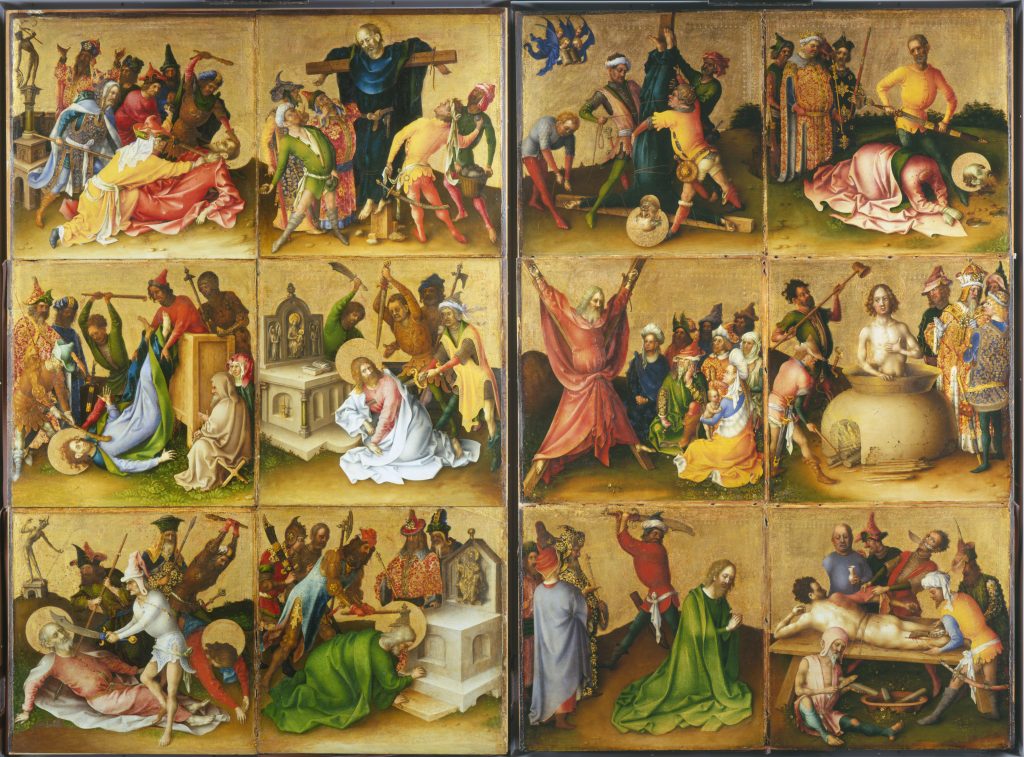 At St Martins I had to give a seminar on the de Kooning show at the Tate in 1968. I knew little about Abstract Expressionism beyond the clichés. At the time the breezy cool of Ken Noland’s horizontal stripes, and Tony Caro’s ‘Prairie’ at the Kasmin Gallery, made everything else look fussy and nostalgic. I wasn’t prepared for de Kooning’s slippery shapes, the muscular brushwork, the sheer energy of ‘Excavation’ or ‘Easter Monday’. Shortly after this I worked as Sol Le Witt’s draughtsman at the ICA, in one of the first conceptual shows, ‘When Attitudes Become Form’. 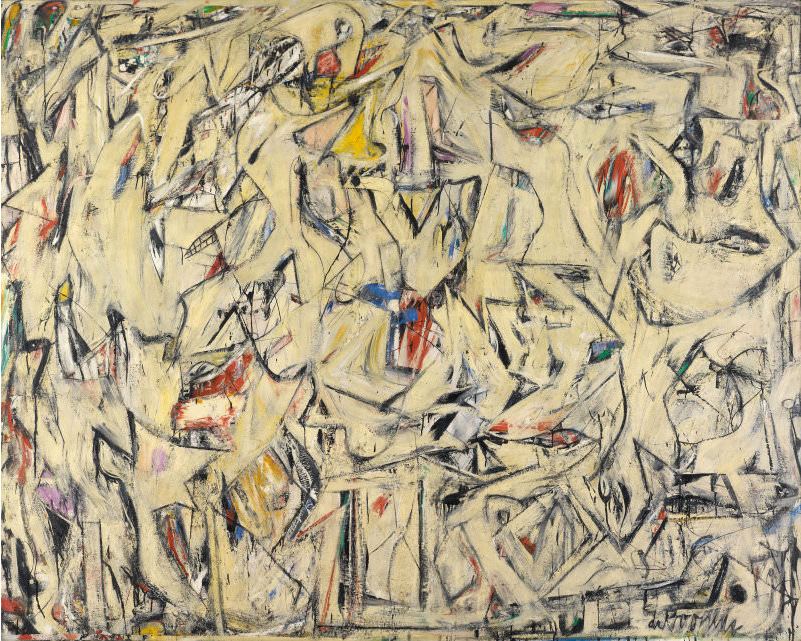 There was an exhibition of Chinese ceramics at the V&A in 1971 that started me off, particularly the Kangxi period. I was at the RCA and haunted the Chinese galleries. Later, I kept returning to the Greek vase section in the British Museum. I like to work out how they were done – the compass point in the shields in Exekias’ vases. Then there are Iznik ceramics… 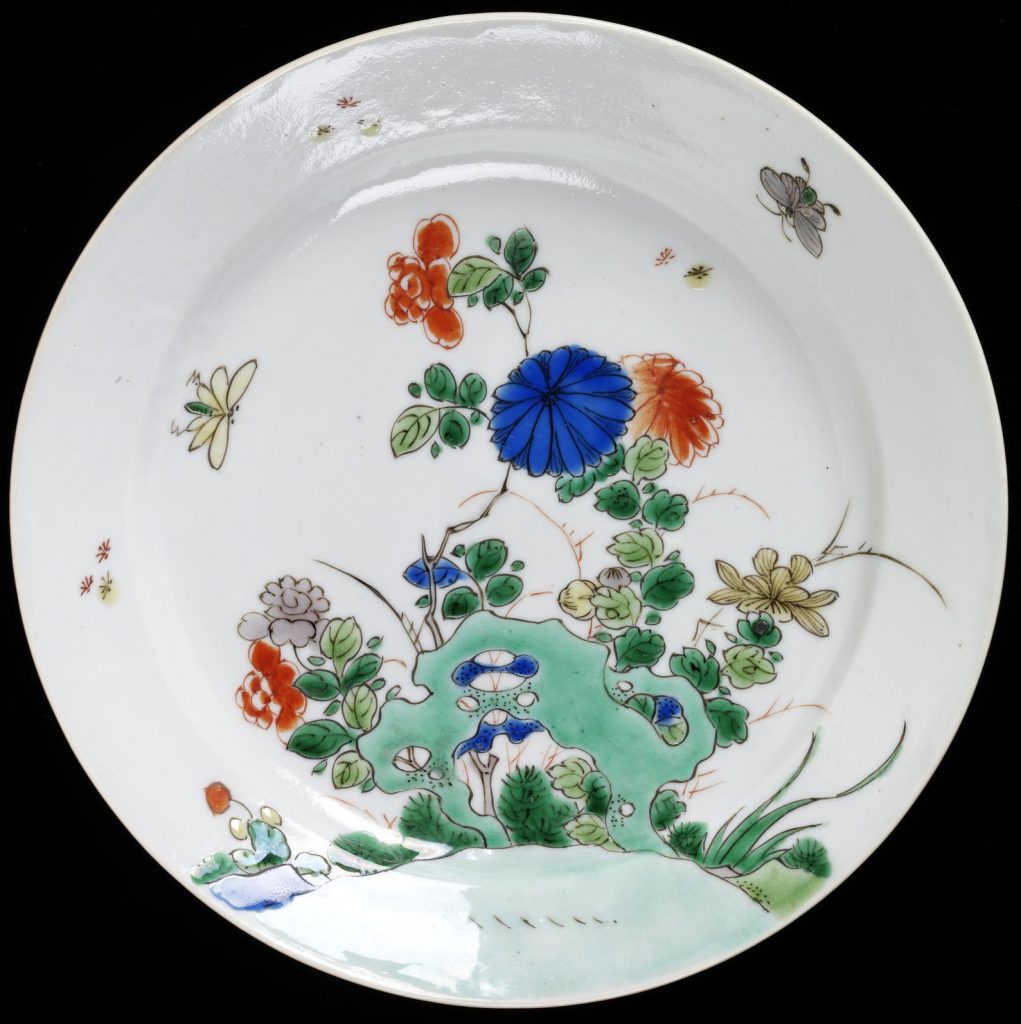 Fast forward to 1980 and the Clyfford Still exhibition at the Metropolitan Museum in New York. In Britain there were just one or two Stills. Rothko and Newman were all about the sublime, spoken of in hushed tones. I had a good friend, the painter Jim Adley, who got to know Still at the University of Pennsylvania1James Adley obituary guardian: https://www.theguardian.com/artanddesign/2015/apr/21/jim-adley-obituary. I had also interviewed Al Held, whose fabulous black and white paintings of the 1970s, shown at Annely Juda, should be on this list2http://alheldfoundation.org/artwork/black-and-white-late/6/. Held had been close to Still, so I knew some background. Held had put up a sign in his studio: ‘who’s afraid of cubism?’ If I said something too respectful of the mythology around Abstract Expressionism Held would point at me and say, ‘you’ve been had!’ I learned from Irving Sandler to trust what I saw for myself, to look really hard. (Irving’s nickname, I believe, was ‘Iron Eyes’.) So, the Met retrospective was something of a confrontation – shrieking colour clashes, lemons and pinks in impasto, a feathery touch in the late works. The paintings were forceful, strained, but defiant and alive. They were more interrupted than composed – odd, contrary, unresolved. In the recent Abstract Expressionist exhibition at the RA I noticed that Still had first outlined the jagged contours in charcoal. I never could get their measure. Sometimes the paintings looked nothing special, just austerely bombastic. Sometimes they were mighty and beautiful. But they were free, independent, and stood apart. They made other works look ingratiating, aesthetically perfumed, overworked, over-explained. 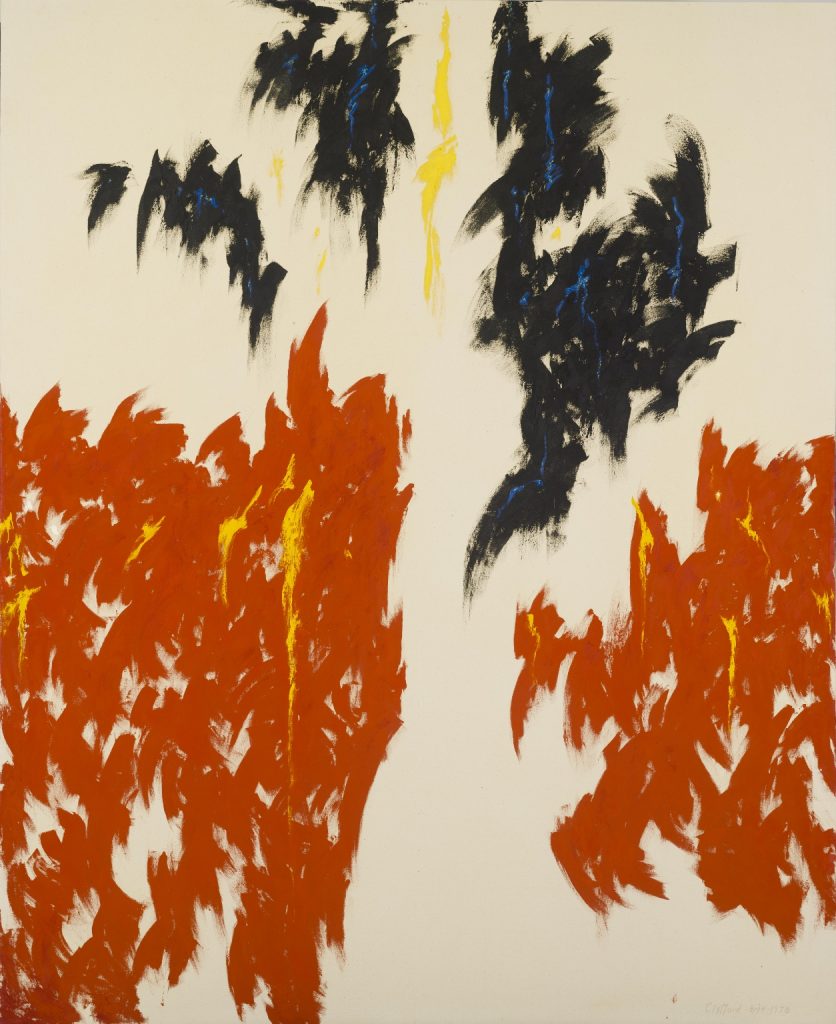 Through John Hoyland, several of us at Artscribe3https://en.wikipedia.org/wiki/Artscribe got to know Jackson Pollock’s elder brother, Charles4Terence Maloon, 2002, Charles Pollock, Sweet Reason, Ball State University Museum of Art. I went round the Pollock exhibition at the Pompidou in the 1980’s with him – quite a privilege – and again when I tried to be clever, Charles, who was a gentle and quiet painter, said, ‘Jim, the thing you have to understand is that Jack was a perfectionist’. Such a simple remark…and it came from the person who had taught Jackson to paint.

Two discoveries – which had nothing to do with art – changed my whole outlook. In 1983 I was an artist-in-residence in Melbourne (alongside John Bellany), and I undertook a lecture tour. My ambition was to get to the Great Barrier Reef. I stayed on Heron Island. I was just snorkelling, but I was overwhelmed by this living kaleidoscope: parrot fish nibbling at the coral, flashes of silver as vast shoals switched about, huge clams, the optical tricks of camouflage, the threat of moray eels, reef sharks, and manta rays. It wasn’t the soft green landscape of the home counties. The ecology was awesome. Back home I set about making sense of this, and that meant a rethink, and painting with fewer distractions. After eight years it was time to cut loose from editing an art magazine. 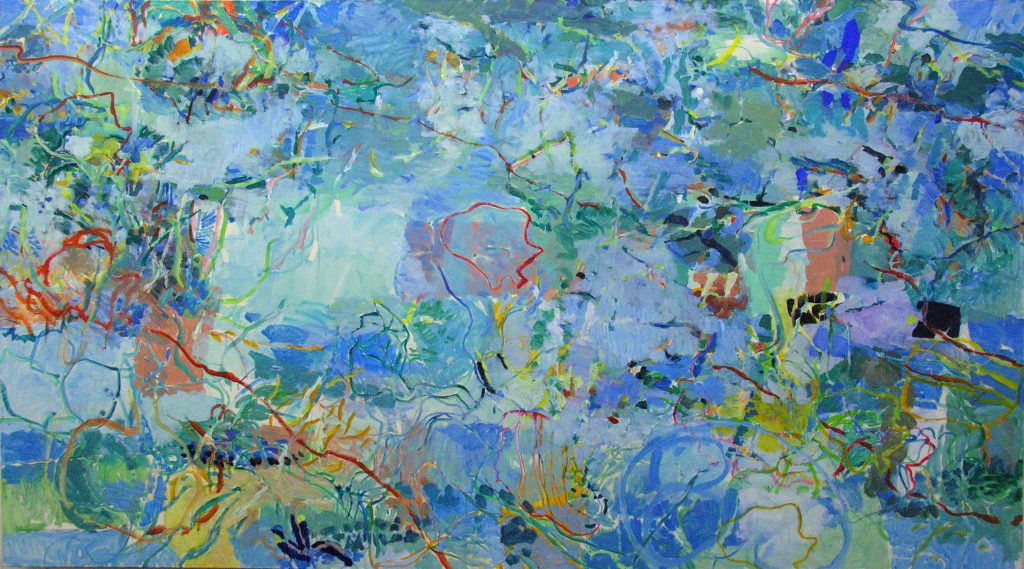 The other discovery was computer graphics. I was primed for this because of the fluorescent colour-scape of the reef. Before the internet, Macs, mobiles, laptops, Photoshop and so on, you could only access ‘high end’ systems – Quantel, Getris, Matisse – in labs or at trade shows. The hardware was way beyond the budget of an independent artist. At the shows huge screens flickered with the palest greens and purples. Tantalizing shapes were transformed in ‘real time’– even photos! This was a revelation. The implications for a painter – for a Klee or Kandinsky – were boundless5http://www.vam.ac.uk/content/articles/a/computer-art-history/. Till then I had only worked on the crude Apple II and Amiga. Here was speed and power. Today none of that would make you blink. We take it for granted, as if it had always been available. 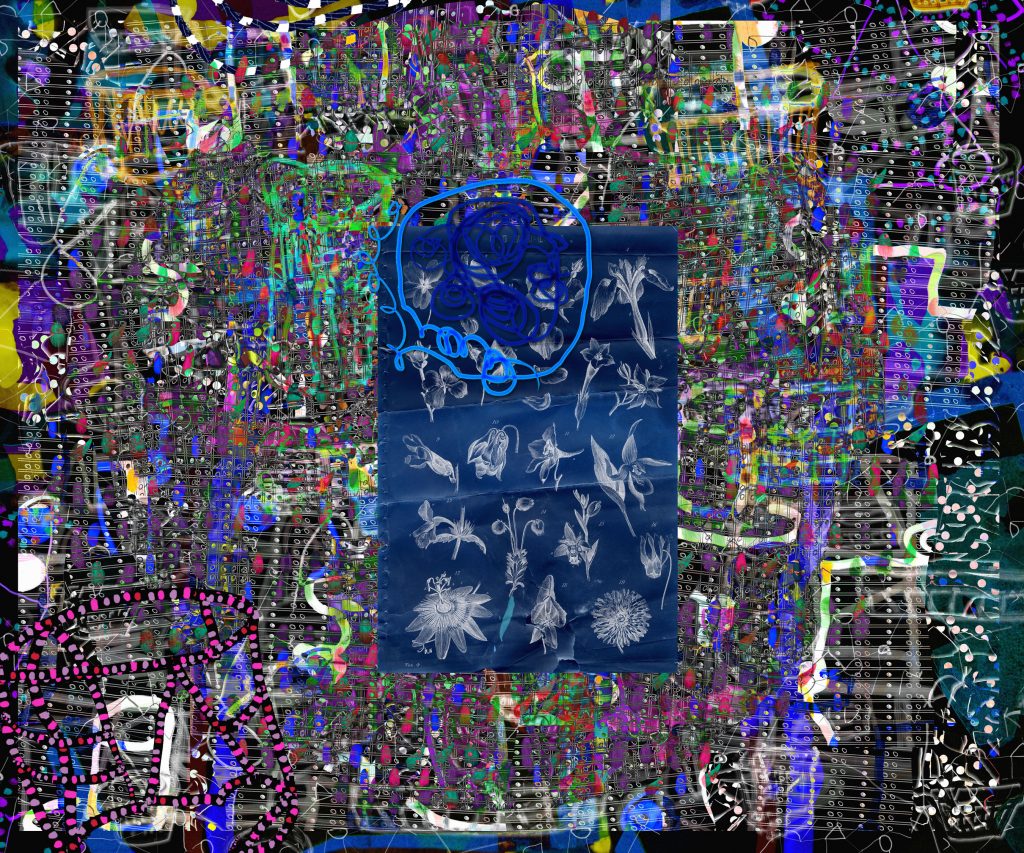 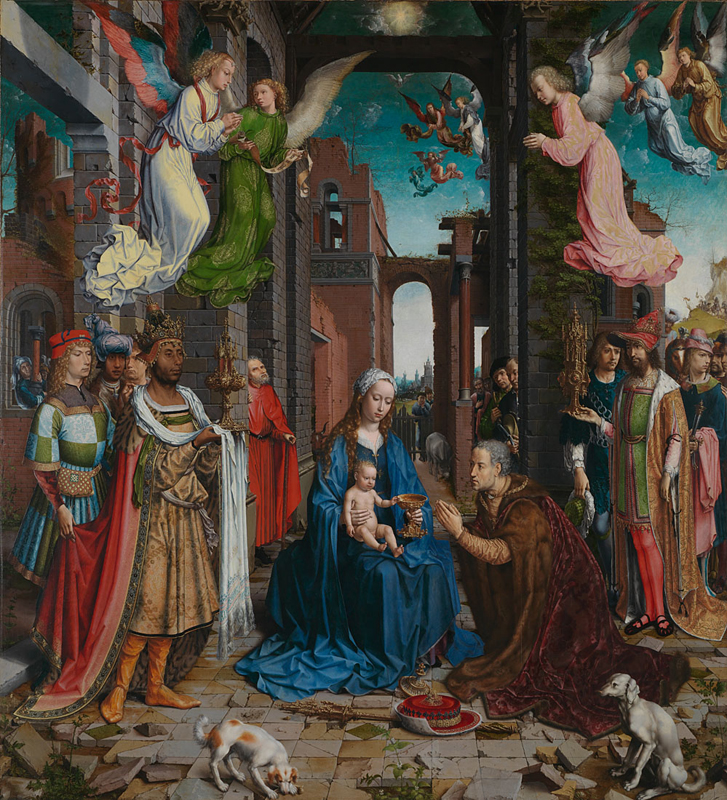 What of abstraction? I confess I use images to solve problems all the time, (except in watercolour, for some reason). After more than thirty years of working with physical and digital paint in parallel there simply is little point in having no-go areas. Here is a list of shows that have won me over by their sheer inventiveness and joy: Sigmar Polke (drawing show at MOMA), Tàpies (print show in Falmouth), Dubuffet (Pompidou), Neo Rauch, Tal R, Hockney, Bernard Cohen, Patrick Heron, John Hoyland, Rose Wylie, Jules de Balincourt (the early paintings), Peter Doig, Vik Muniz (retrospective in New Orleans), Craig-Martin (Serpentine). I don’t recall ‘abstraction’ coming up as a question. 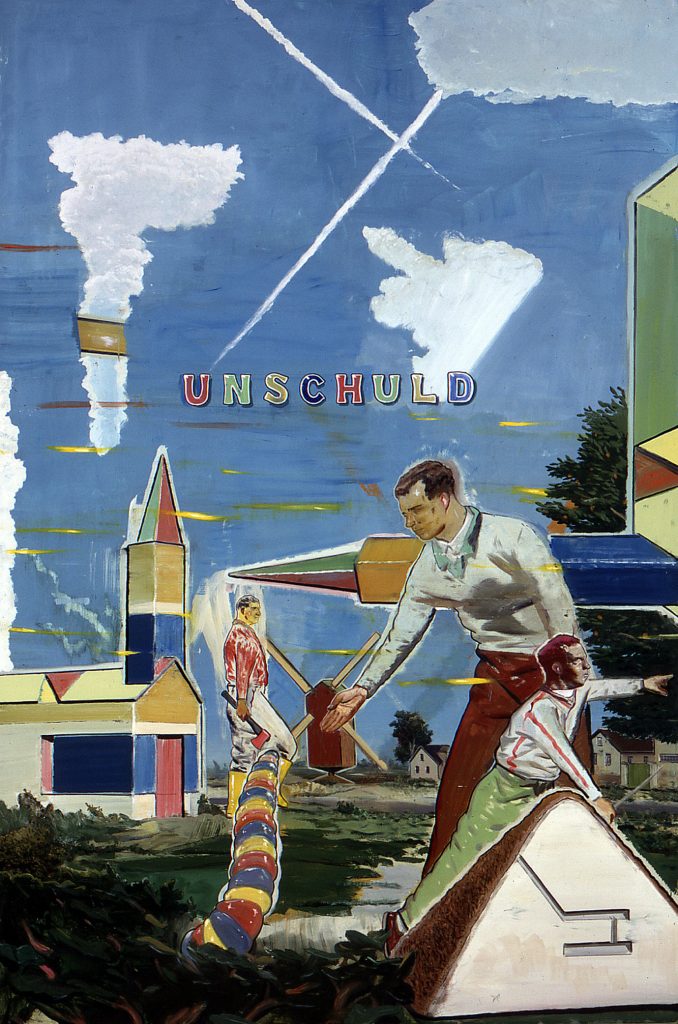 There was a Sam Francis print at Bernard Jacobson’s a few years back. I really wanted to own it, but took photos instead, especially the details.  I ‘borrowed’ these for a painting called ‘Marsh Harrier’. 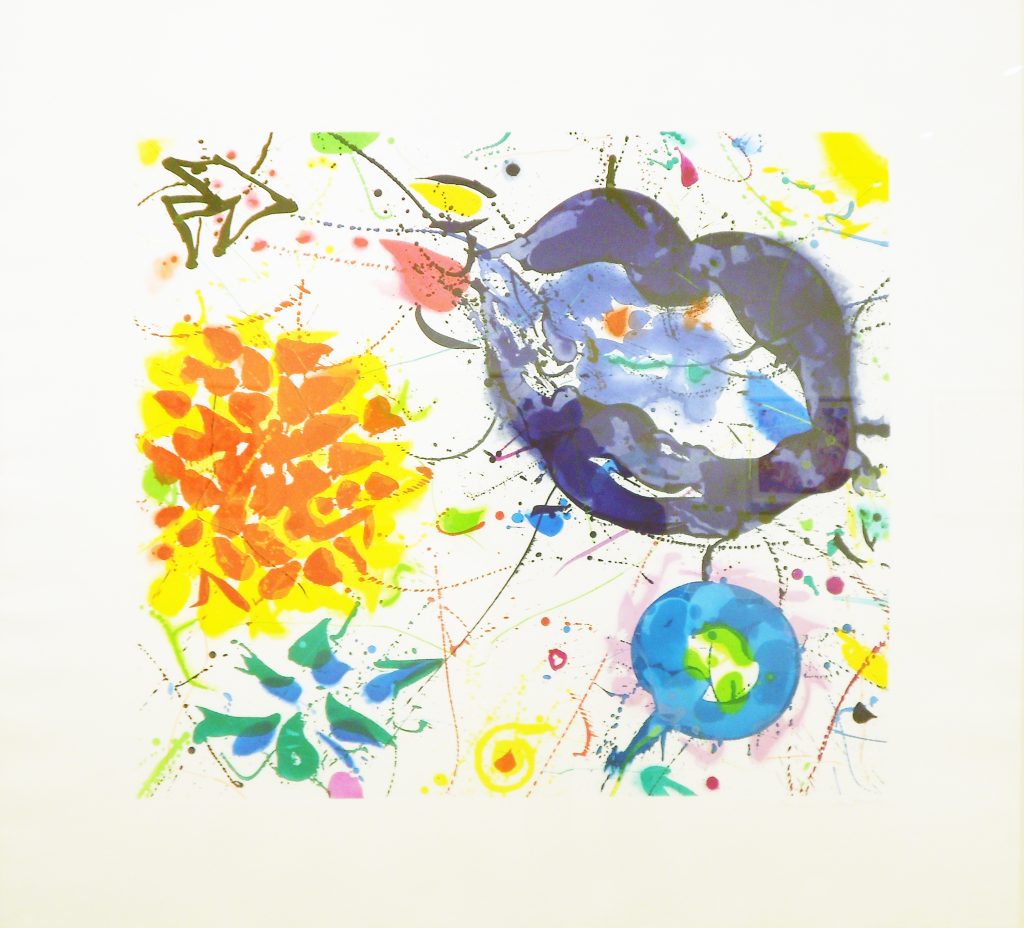 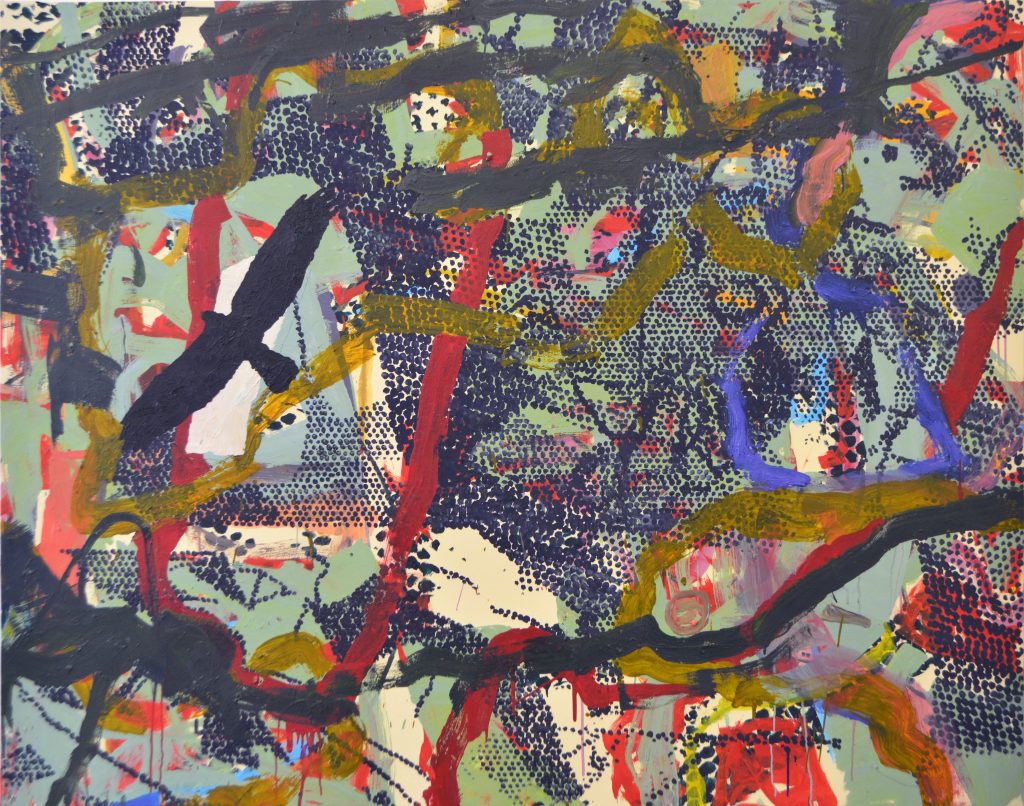 When you transcribe a painting, or make a quick sketch in a museum, you unravel its secrets. I saw the Miro show last year in Paris. I love the way the images are found in the dance of the line: the looping calligraphy ropes in weird personages while spelling out the title: ‘Escargot, Femme, Fleur, Étoile’. It’s all discovered in the making.

Hang on. I haven’t mentioned the Braque ‘Pink Tablecloth’ in the Thyssen in Madrid…. 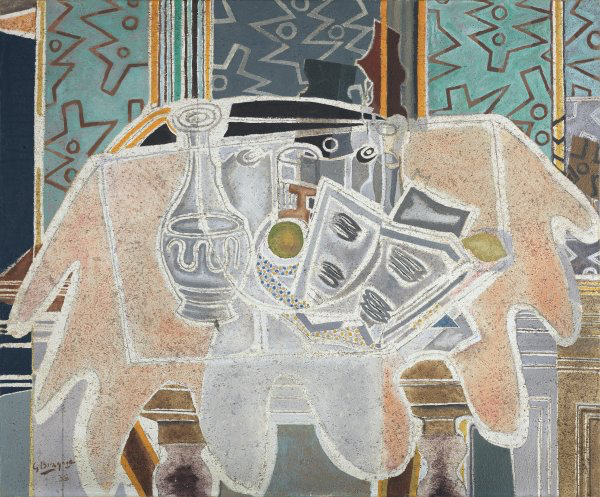 James Faure Walker will be showing recent paintings at Felix and Spear, 18 May – 15 June