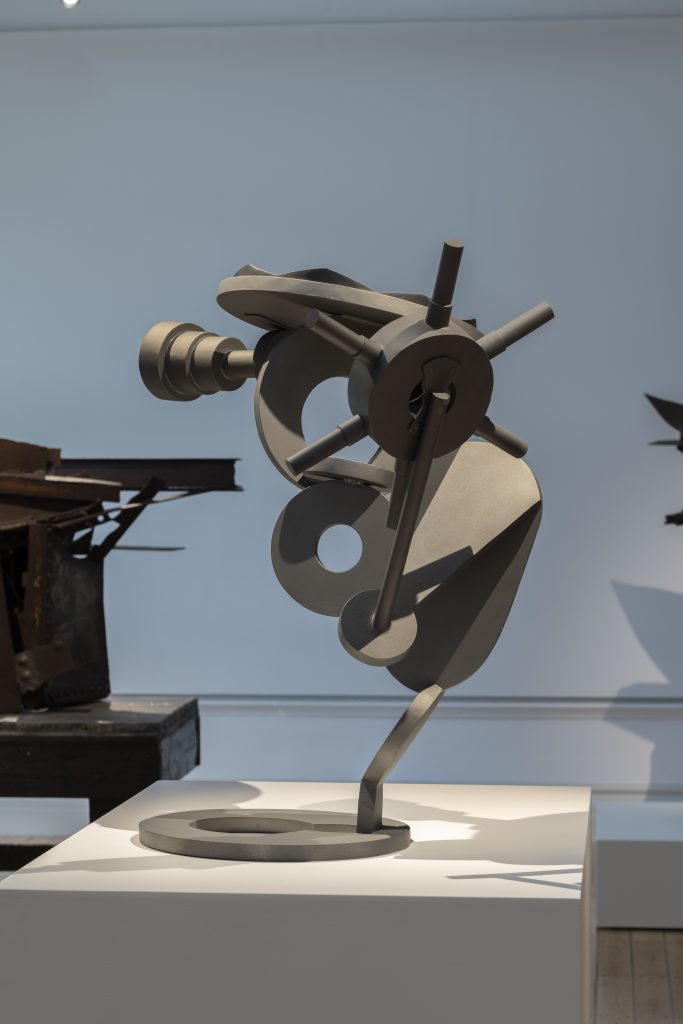 This exhibition contains a selection of sculpture and works on paper by Michael Lyons going back to the 1960s. Though compact, the chronological range gives it the feel of a retrospective, and offers a chance to look at the wider concerns Lyons has developed over an extended period. I’ve always thought that the key to his work was animation: by which I mean the traditional sculptural aim of making inanimate material take on the signs of life. What emerges from this show is the different forms of ‘life’ which are evoked: organic, artificial and preternatural.

One obvious sign of life is movement. In the sculptural domain, however, where actual movement is excluded, it usually refers to the kinetic illusion in work that is literally static. Traditionally, the impression of action is associated with representations of the human figure or of animals; but movement is also a salient feature of the inorganic world of the machine.

The anatomy of machines and their inner workings have always been major concerns for Lyons, almost from the start of his career. In the exhibition, the purest invocation of mechanical life is in an early piece called ‘Fireraiser’ of 1970.  This has the appearance of a once functioning apparatus which has been dismantled but whose parts still display the memory of working together to fulfil some forgotten task.

‘Fireraiser’ contrasts interestingly with a slightly earlier work, ‘Punchline’ of 1969. This has parts that are mechanical in origin, but they are not arranged to comply with the logic of mechanical relationships. Their particular style of animation is reminiscent of puppetry, as if invisible strings supported individual components. It recalls early Disney, an impression supported by the ‘Sorcerer’s Apprentice’ quality of two drawings of the time, depicting forms that look like machine components but don’t connect in the expected way.

Forms with mechanical or industrial connotations are, of course, inevitably associated with welded steel sculpture, identified with the work of Anthony Caro, whose major show of 1969 had a strong influence (both positive and negative) on the development of the practice. For some, making complex structures by joining one element to another was liberating: decisions could be made, then unmade; the work could progress in one direction, and then something unpredictable might happen, demanding a response. The sculpture had a kind of ‘life’ that was legible in the finished work, lending the impression of dynamism rather than finality. 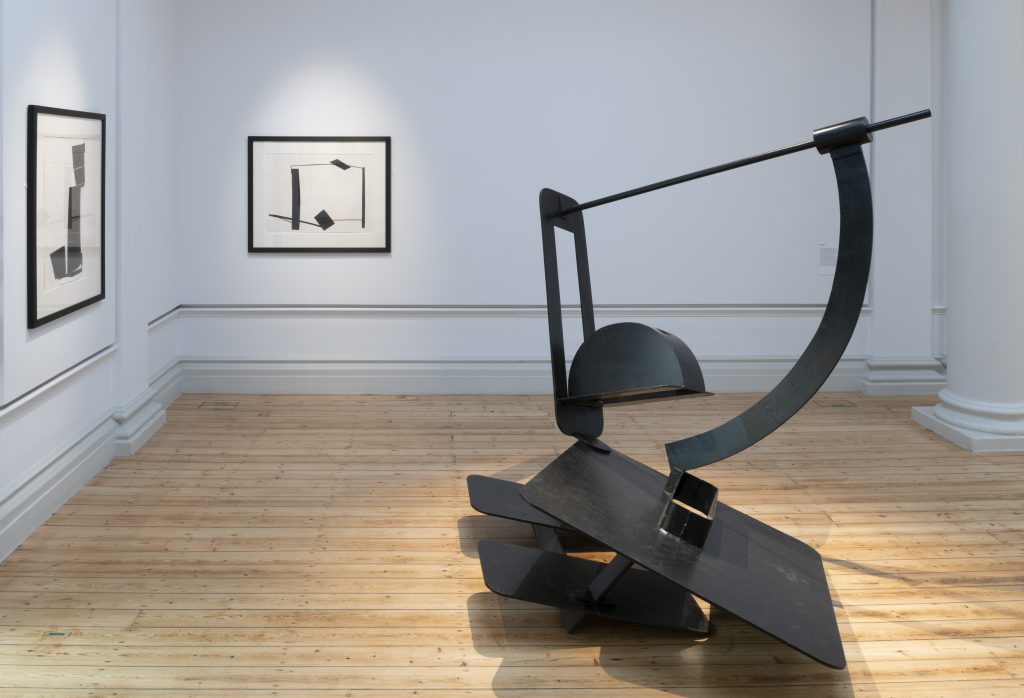 Caro famously said ‘I do not compose’, and others have seen the relationships between the formal elements in his work in terms of intelligible human movements and gestures. In ‘Coltman’ of 1974, a relatively early work, Lyons gathers together the ingredients of welded steel sculpture– large components that look like they have an artless, but technically identifiable character– in what seems like a choreographed rather than compositional relationship. This is enhanced, I think, by the even patina of the piece. The angled base element is linked to the upright structure by a flat curved piece of steel, joined to an angled rod by an engineered cylindrical sleeve. This looks like a reference to machine movement as in a piston or hammer, but it can also be seen in anthropomorphic terms, as the swing of an arm. It certainly isn’t just a device meant to hold two parts of the sculpture together.

Yet, despite anthropomorphism, a major factor in understanding Lyons’ work is the recognition that the charismatic power of machines, even ones that no longer operate, is much greater than the power generated by human capabilities. This comes over very clearly in ‘Dialogue of the Alligators’ of 1995, a large, seemingly unliftable collection of found pieces of steel, sitting like a vast engine on a massive workbench which looks capable of supporting several tons of metal with little trouble. 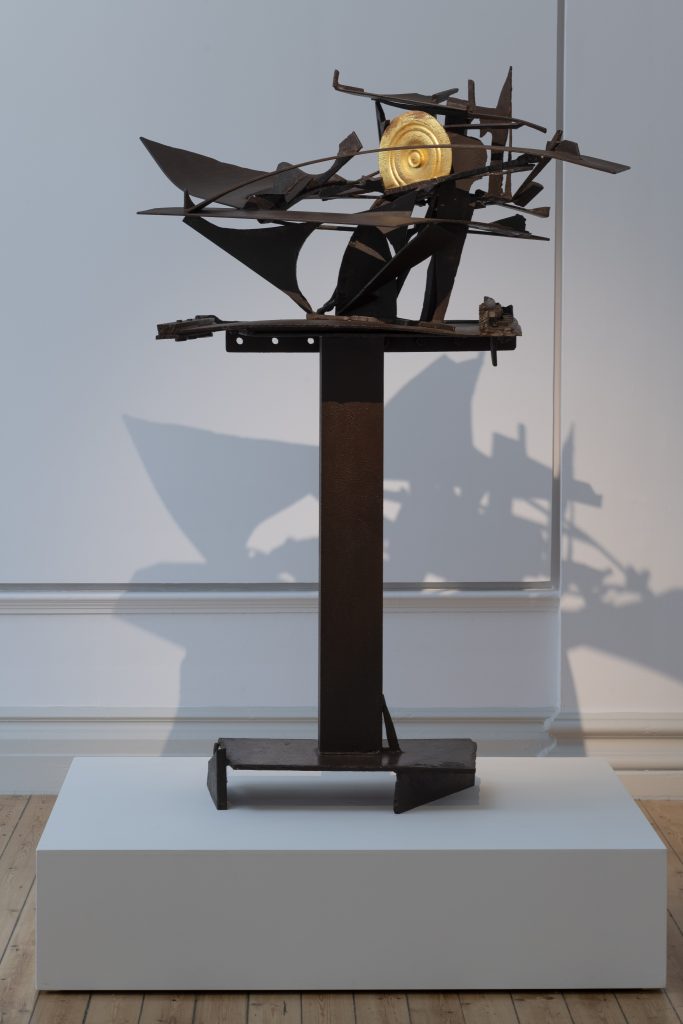 Recognising the preternatural capabilities of the machine, literally translated through the physical weightiness of steel, has led Lyons to explore another charismatic force in the universe: gods, whose power outstrips the meagre possibilities of the human subject. In these works, though still in the medium of welded steel, the material economy is less heavy, as if divine power has to be represented not as brute force, but as something more subtle. This contrast between the physical domain of the machine and the supernatural world of the gods seems to be acknowledged in ‘Eridanus’ of 2008. The base, the vertical support and the platform are solidly built, even over-engineered, but the structure which surmounts it is open and almost gestural, suggesting lightness and buoyancy. This is emphasised by its position at slightly above head height. Inserted into the aerial steelwork is the symbol of the sun in gold leaf: a strong gestalt, but virtually weightless in physical terms.

Using steel that is lighter seems appropriate, given the transcendental dimension of the various narratives that Lyons is currently engaging with. But this economy, which shows up best in ‘Mithras Suite IX: The Eighth Gate’ of 2013, is not unprecedented, and has affinities with three collages he made between 1974-75, which are also in the show. The medium is black paper, cut out and placed on a white ground. Despite taking up no space or volume, the planar shapes in the collages in themselves appear to function as very thin sculptures in steel plate, rather than as diagrams for the construction of sculpture. 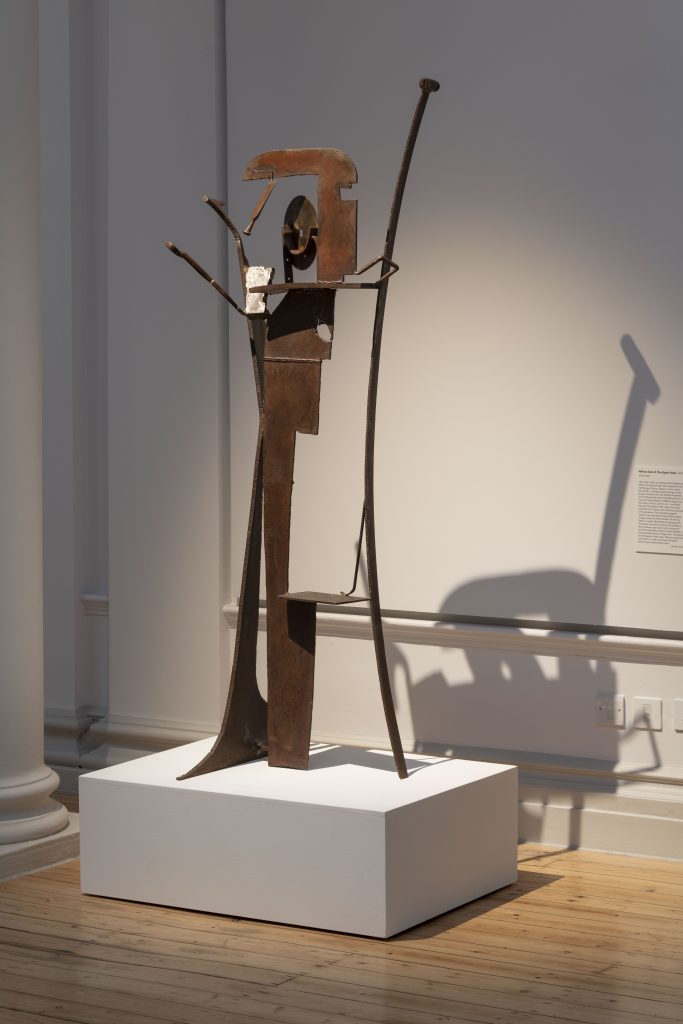 ‘The Eighth Gate’ benefits from a similar material restraint. Its footprint is narrow, and, though tall, its structure does not need too much buttressing or bracing in order to maintain its pose. The circular saw blade contrasts with the cut plates it nestles within, and despite being maybe another reference to the sun, it also reads as a cog: again, a sign related to movement, and to mechanisms whose workings are exposed.

‘The Mithras Suite: Carrying the Bull’ of 2013, a piece that to me seems very impressive and successful in combining types of sculptural animation, is constructed using more robust elements. It contains a heavy bar of steel and can be understood, as Caro’s work before it, through the intelligibility of human actions. The spread of the weight across the sculpture; the shifting of balance that has to take place to accommodate this burden, denoted by a sway, both sideways and forwards, in the vertical components; even the fact that it seems to have a back and a front, all register a sense of what carrying something feels like. With its angles and tensions, it also displays a great deal of formal dynamism; but beyond that, it seems to channel an ancient idea of animation which sprang into existence in early Greece, when it was discovered that extending its left foot seemed to bring a sculpted figure to life.

Lyons continues to find different ways of bringing life to sculpture, echoing human actions and exploring the vitality of deus and machina, in the medium of welded metal. The medium itself seems to come from an industrialised past, to confront us in a digital, de-industrialised world in which art has moved from the manufacturing sector into the service economy. The experience of weight, texture and material, missing from virtual reality, maybe has to be readdressed in our contemporary situation. Maybe sculpture, even sculpture that uses subject matter derived from ancient myths, can lead us back to ‘real’ reality.

Michael Lyons: Machines and Myths at the Hatton Gallery, Newcastle.