Sarah Morris: ‘Machines do not make us into Machines’ at White Cube, Bermondsey

Could it be that abstraction has finally fallen in step with the zeitgeist? No longer a martyr laid to rest in the boneyard of rarefied aesthetic ideals, it has risen again as both observer and critic of the rise of the ‘mega city’ and of our image-saturated anthropocene epoch.

Sarah Morris has been an inveterate explorer in paint of a wonderland of seesawing, vertiginous abstract spaces that feel like a visual analogue for the crazed architecture of the global neoliberal hegemony. But here at the White Cube, Bermondsey, it is Morris’ films, rather than her paintings, that really excite. They are not simply abstractions of office blocks or shiny-fronted phones: they operate in the cracks between representations of abstractions and abstractions of representations, opening up the ‘world city’ as a set of diagrammatic images laden with coded instructions. What are these codes? Whilst a film-maker such as Adam Curtis ransacks the archives of late western civilisation’s image-laden consciousness, finding conspiracies dancing cheek-to-cheek with the dark absurdities of ‘tech-driven warfare and the networks of power that have given rise to them, Morris’ works in film scrutinise the sometimes shiny, sometimes dirty surfaces of international capital: the architecture, the advertising hoardings, a soldier’s Armani sunglasses reflecting the urban hinterlands of Abu Dhabi. Morris contrives a hypnotic play of signs and signifiers that slip and slide enigmatically before our eyes like a road movie emptied of human drama; yet they are full of cleverly-constructed cutaways and ambiguities, both temporal and spatial; they re-route any potential narrative of a ‘clash of cultures’ through a never-quite-thereness, a constant deferral of climactic cinematic moments. All is dissolved into episodic, quotidian repetitions of everyday labour, contrasted time and again with highly choreographed cultural events, such as Abu Dhabi’s ‘National Day’, a celebration of the country’s 46th anniversary. Instantloveland was left feeling alienated and fascinated in near-equal measure. A peculiar, yet not unsatisfying frisson.

The paintings are good; but they feel over-familiar. Her filmic abstractions, on the other hand, render ‘here’ as ‘elsewhere’, and ‘elsewhere’ as ‘here’; they measure the cold pulse of networked power. Yes, Instantloveland was quite taken by Morris’ own special brand of ‘High-Anthropocene Noir’. 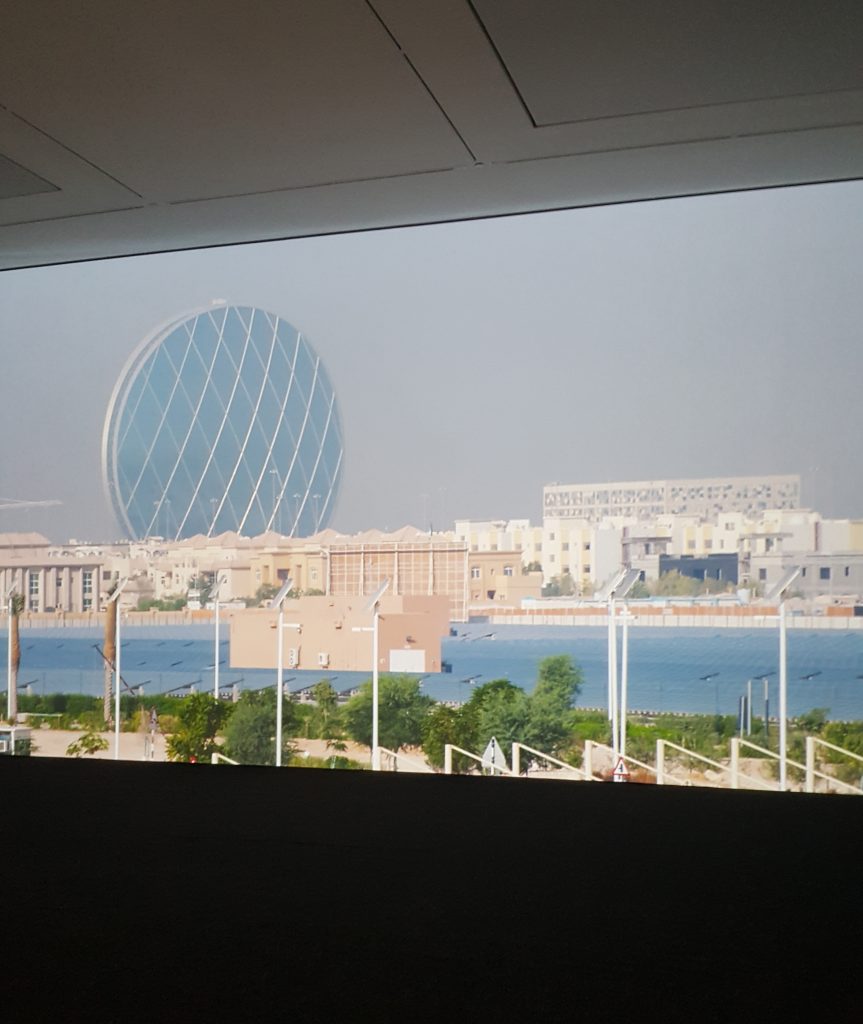