‘Noguchi’ at the Barbican Centre, London

What does the end of a dream look like? J G Ballard offered one possible answer in his short story, ‘Memories of the Space Age’, in which the abandoned, rusting launch sites at Cape Canaveral have become a memorial to a future that never was, standing in silent judgement on the end of the bright hopes of the Apollo space program; and despite their maker’s lifelong embrace of the possibilities of American technological progress- of which the moon landings could be seen as a kind of culmination- the sculptures of Isamu Noguchi in the Barbican’s show have something similarly elegaic about them; they seem to carry within their perfectly-crafted surfaces both a belief in the great project of modernity, and a sense of its tragic falling short.

As a ‘nisei’- a child of a Japanese father and an American mother- Noguchi experienced ‘the American century’ from both sides; on one side, as a citizen of a nation building towards world supremacy, but on the other, as one of that nation’s perceived ‘enemies within’, who submitted voluntarily to internment in a camp in the Arizona desert in the months after the Japanese attack on Pearl Harbour. What this show does well is demonstrate the degree to which Noguchi both belonged and didn’t belong, either to his birthplace, or to the movement of the modern: walking the circuit of the upper galleries in the Barbican’s exhibition space, we watch as Noguchi takes the stripped-down, simplified formal language of sculptural essentials he first mastered as Brancusi’s assistant in Paris during the 1920s, and repurposes it to give haunting form to the experience of internal exile amid the vastness of the desert landscape; the pure forms of Modernism, with all their implied utopianism, become, in Noguchi’s wall-mounted and tabletop reliefs, a vehicle for the poetry of loss and abandonment. 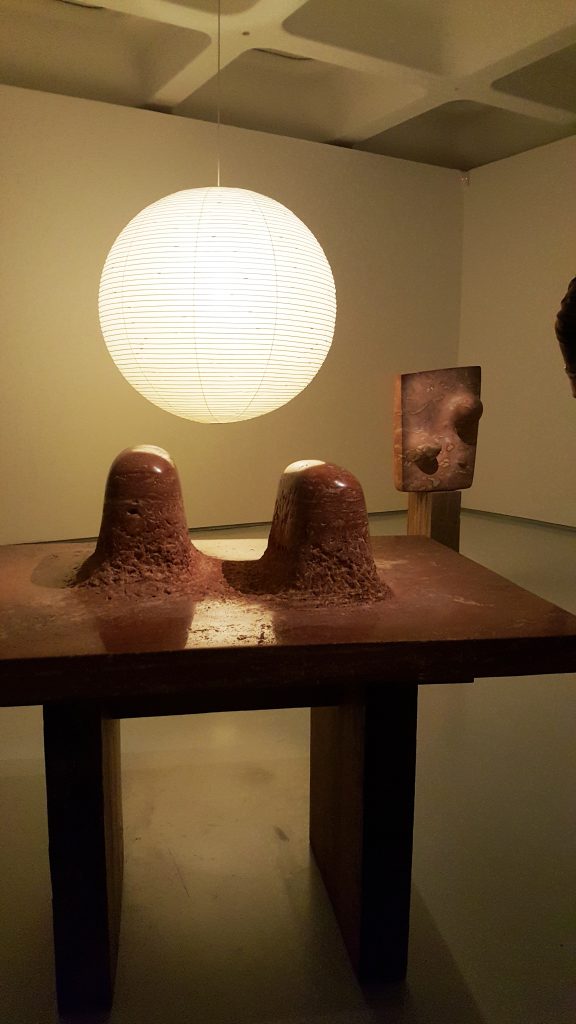 The writhing biomorphism of much of his work from the last years of the Second World War and beyond, such as ‘Humpty Dumpty’, ‘Avatar’ and ‘Trinity’ seems, at first sight, to express their creator’s optimistic, humanistic impulses: Noguchi’s preference for methods of assemblage that shunned welding, bolting-together, or any other form of permanent fixing in favour of a slotting, inserting and interlocking of elements that harnessed the force of gravity as their ‘glue’ demonstrates an attitude of open collaboration with his materials, and the physical forces governing them, that is worlds away from, say, Picasso’s aggressive assertion of physical mastery over whatever he turned his hand to in three dimensions; and the resulting work has none of the latter’s barely-contained intimations of sexual violence. Yet in its place there is, instead, a gentle but intense pathos in the sculptures’ frequent use of hanging and downward-plunging forms, born of a pained awareness of transience, and of the extreme precariousness of all endeavour after Hiroshima and Nagasaki: ‘Trinity’, after all, was the name the Americans had given to the very first nuclear detonation in the New Mexico desert. 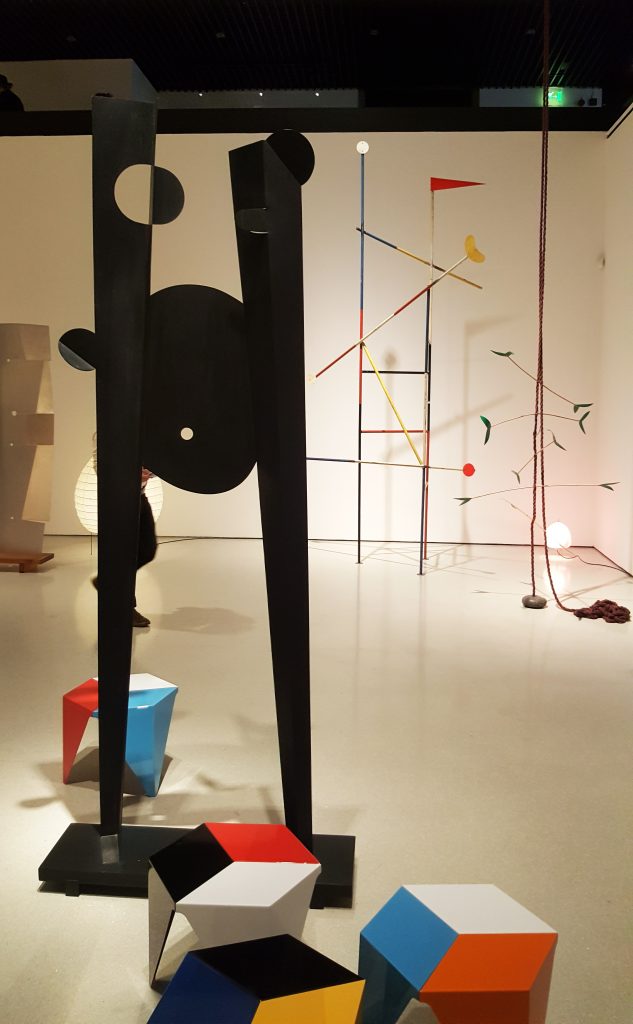 Theodor Adorno spoke of the impossibility of poetry after Auschwitz; and Noguchi’s career post-1945 seems to acknowledge if not the impossibility, then at the very least the excruciating difficulty of finding a rationale for making sculpture in the shadow of nuclear annihilation. Noguchi believed passionately in connectivity: between the self and the world, between the world and the cosmos, and between ‘Art’ and forms of creativity widely considered as separate from or subordinate to it, such as product design, handicrafts, and social architecture. He had begun developing designs for parks and playgrounds during the 1930s; and his response to the existential threat of the nuclear age was to renew his commitment to the integration of sculpture with both public and private social space through his work on design projects such as the gardens for the Paris headquarters of UNESCO, and the exquisite pairings of light with lightness in the paper lanterns and lampshades of his ‘Akari’ works. 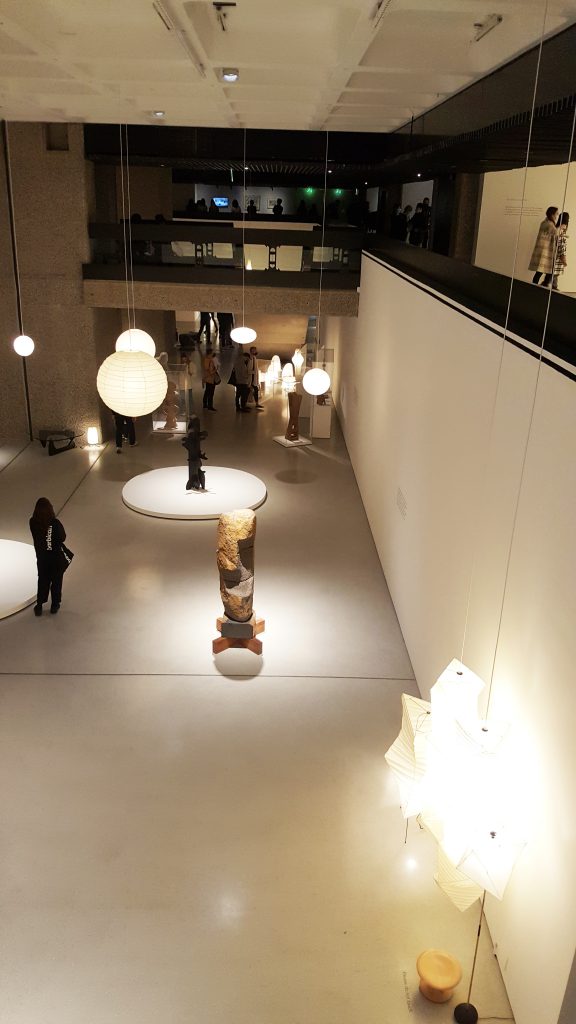 This roaming-free between disciplines is arguably the very thing that cost him the place in the modernist pantheon that his considerable gifts merited: by the end of the 1960s, it seemed as if no-one knew what to do with an aesthetic as diverse, as inclusive, and as rooted in traditions of craftsmanship as Noguchi’s, in the era of ‘the dematerialisation of the art object’. And to Instantloveland’s eyes, the Barbican’s curatorial team hasn’t quite worked out what to do with it either, in their pursuit of the laudable objective of emphasising Noguchi’s often playful, interdisciplinary lightness of touch; with the unfortunate result that the mishmash of the ground floor galleries (display cabinets in uncomfortable combinations, stacked in corners and under stairs amid tangles of cables, and lanterns, big and small, hanging and standing, interrupting the attenuated sight-lines of long cavernous spaces already clogged-up with visitors) conjured up an ambience all too redolent of the Saturday afternoon scrum at IKEA. And upstairs, all but a couple of the spaces felt either too empty or too full, with many taking on the appearance of a stage set in which it felt difficult or impossible to grasp the sculptural qualities of works ‘in the round’.

Noguchi deserves better. Credit where credit’s due, though: many of the displays are marvellous, and unapologetically beautiful, and allow for a first-hand encounter with work that bodies forth both passionate belief and profound scepticism; a dialectic simply expressed in the tribute Noguchi paid after the death of his longtime friend and collaborator, Buckminster Fuller, in which he spoke movingly of the visionary architect’s ‘constant belief in the success of the human family through science’, but to which he felt compelled to add the warning: ‘you all know what has happened’. Indeed we do. 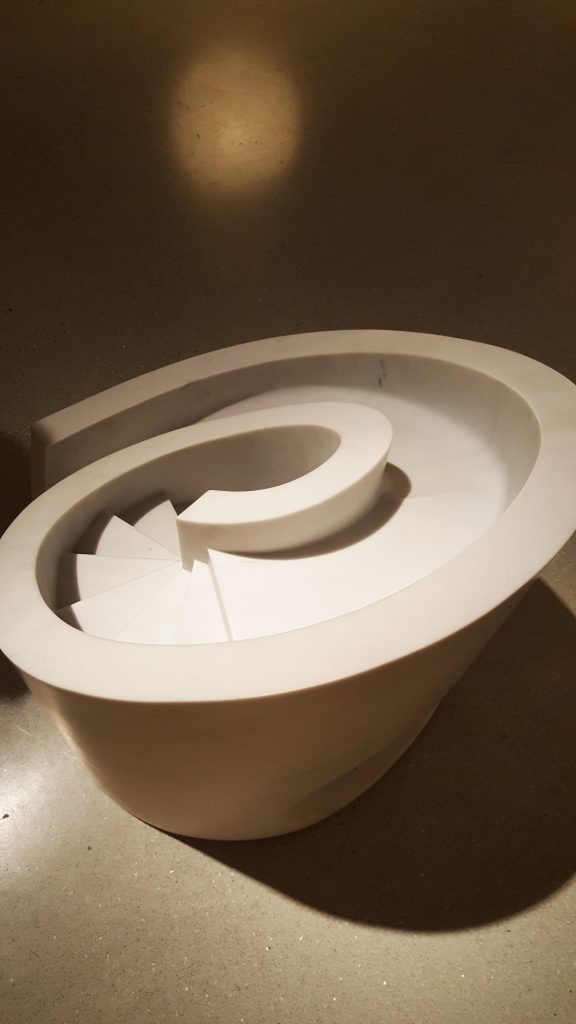