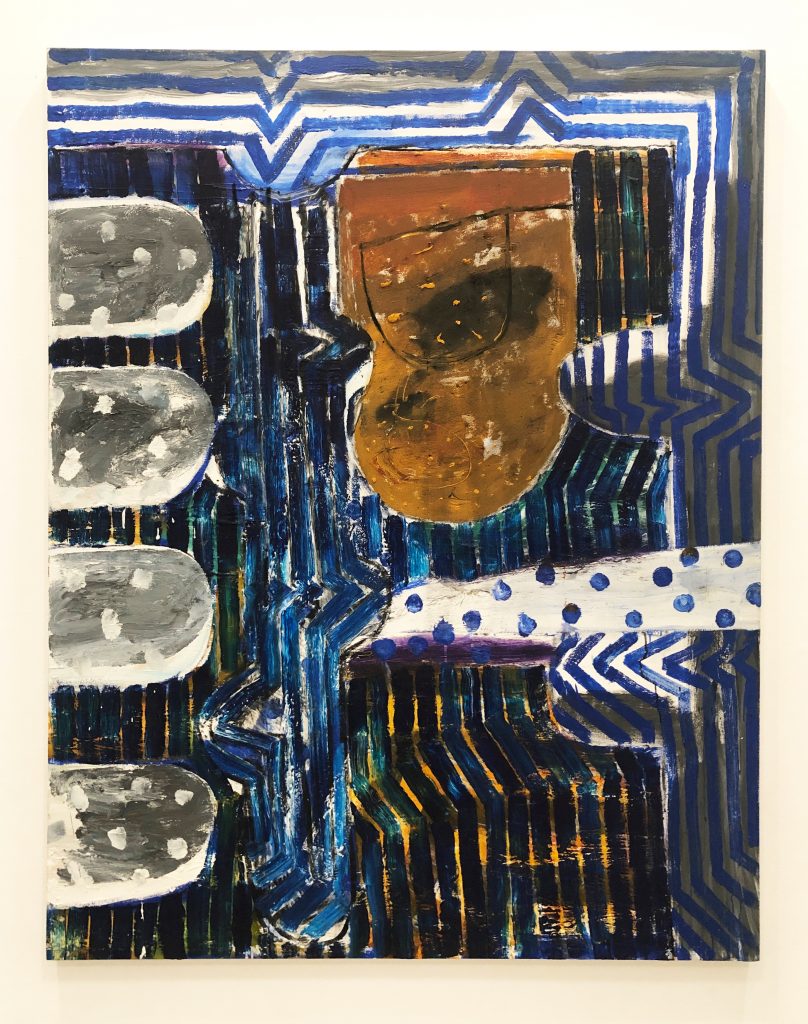 There was a time, back in the early 1980s, when you couldn’t walk for more than a couple of yards through the Fine Art department of a British art school without tripping over a John Walker painting. Not that Walker himself would have painted the thing, you understand; by this point, he had been living and teaching in Australia for several years, but so great was his influence on the painting culture of the time that countless impressionable student acolytes were more than happy to do the job for him. Thinking back to its misspent years at a Higher Art Education establishment in the Greater London area, Instantloveland can still recall how the dust jacket of the library copy of ‘Paintings from the Alba and Oceania Series’ (the catalogue for Walker’s 1985 Hayward show) gradually disappeared beneath a welter of painty fingerprints, as a result of its having been passed back and forth endlessly between students who treated it as a ‘how-to’ guide for those that liked their art abstract (but not too abstract), hot, heavy, and brimming with borrowings from Goya, Monet, Picasso, and all points in between…

Ah, but how swiftly the wheel of art world fashion turns. Unwilling to play as out-and-out dumb as all those that jumped on the bandwagon of ‘bad painting’, or to act as knowingly critical of the medium as the dour deconstructionists that followed them, Walker, with his swashbuckling painterly style that unashamedly ran the whole gamut of Old Master techniques, started to look like a quaint anachronism, a relic from a lost age of connoisseurship; in truth, just a little too ‘good’ for his own good. The Hayward show, it turns out, was not just a summation, but also a swan song; Walker moved again to the USA, where he’d spent a good deal of the 1970s, to take up a teaching post in Boston, and never again showed in the UK outside of Cork Street. 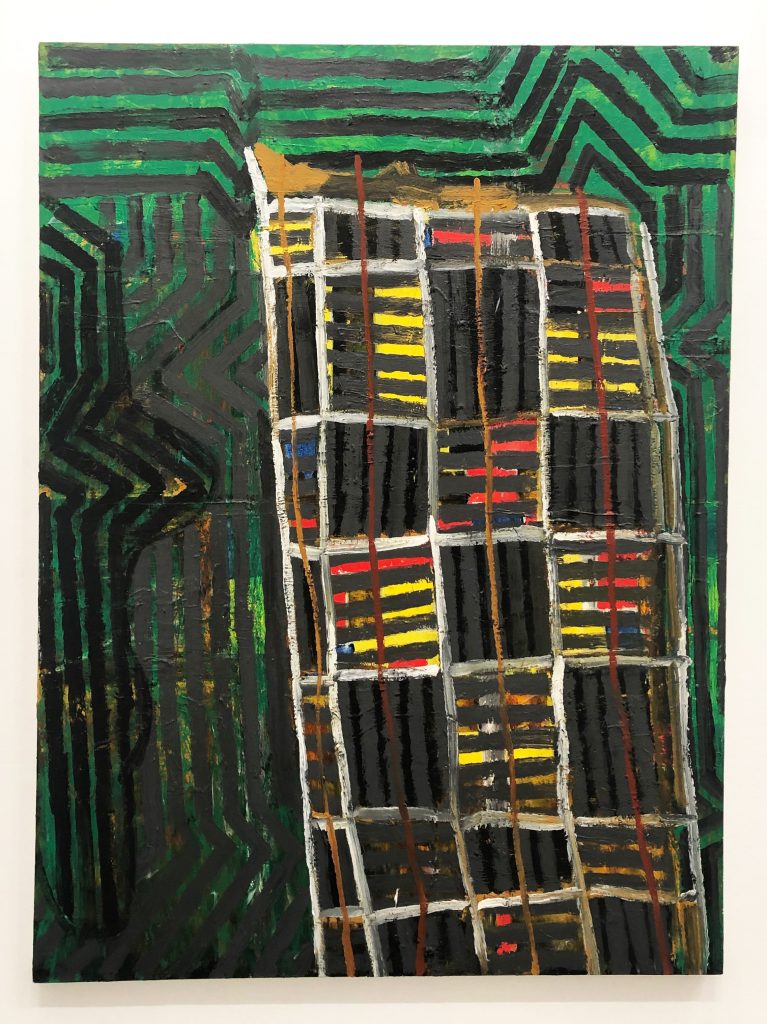 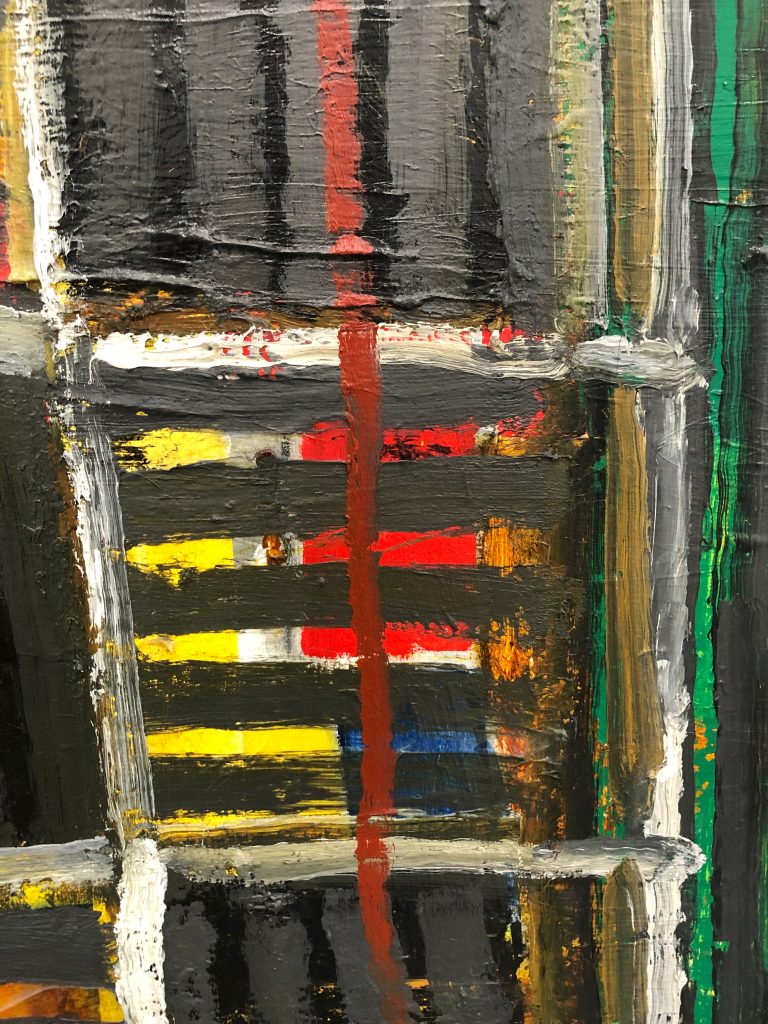 What to make, then, of this return to his native Birmingham, and of the fourteen new and newish paintings that he has hung in the city’s Ikon Gallery, forty-eight years since he last showed there? He has lived for many years now on the coast of Maine, and this body of work elaborates on the landscape imagery in the hundreds of plein air oil sketches he has made in and around Seal Cove, abstracting shore, tide, and high horizon line into areas of hatching, dots, striated grids, and long bands of parallel brushstrokes that angle in and out of the paintings’ space; interspersed with forms that have populated his work for half a century, the ‘shield’ shape, the squat, flattened-out oval ‘pill’.

Alas, it all left Instantloveland feeling strangely unmoved. Walker’s touch feels everywhere either too heavy or too light: too heavy in the case of the clogged, turgid blue and black strokes in ‘John’s Bay Pollution’ (2017) and ‘John’s Bay, Red, Yellow, Blue’ (2011-18) which shut down the paintings’ space, squeezing out all the air, darkening and dirtying the colour; too light in ‘Fishing with Tom and Les’ (2017), which collages canvas on canvas, playing off bands of thinned paint against overlaid columns and rows of bunched short strokes, and a row of schematic fish shapes; here, the relationships between the marks, shapes and colours are so perfunctory, so unresolved, that it’s impossible to discern what goal- if any- Walker had in mind, other than to put as much distance as possible between himself and the luxurious handling that had once been his trademark. 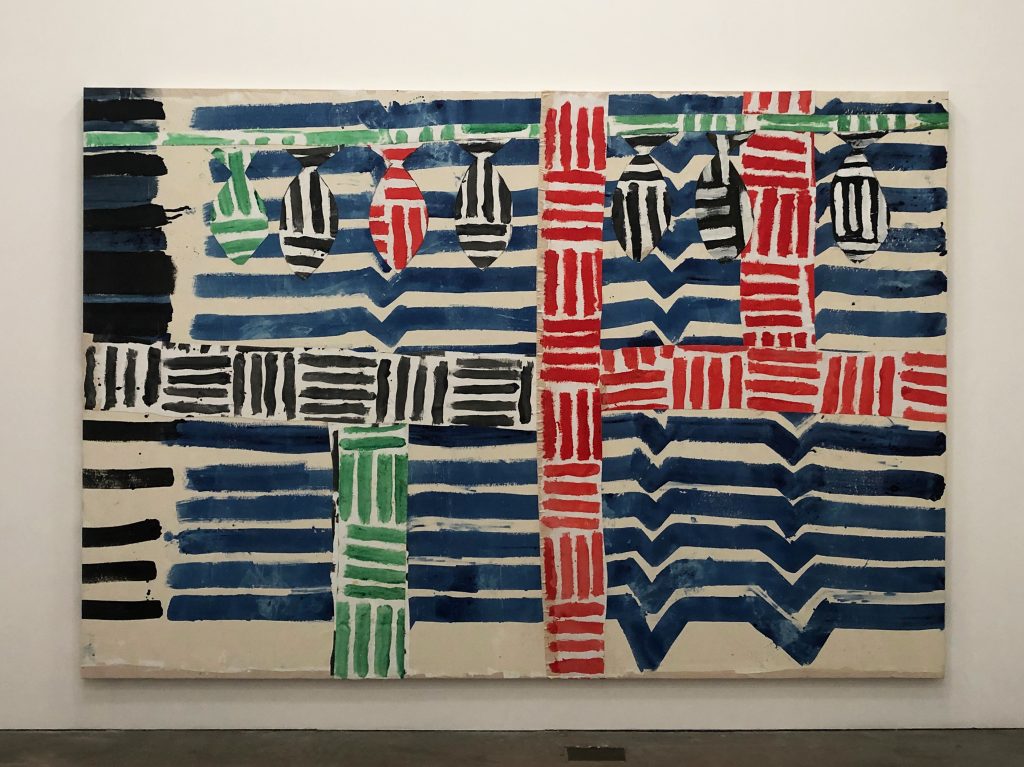 There’s far more juice, and joy, and sheer invention, in the countless small studies that Walker has painted in front of the same motifs that feature here; like so much else of his output over the last decades, they haven’t had an outing outside of the USA, to the best of Instantloveland’s knowledge. Ikon should host a selection of those: now that would be a show worth seeing.