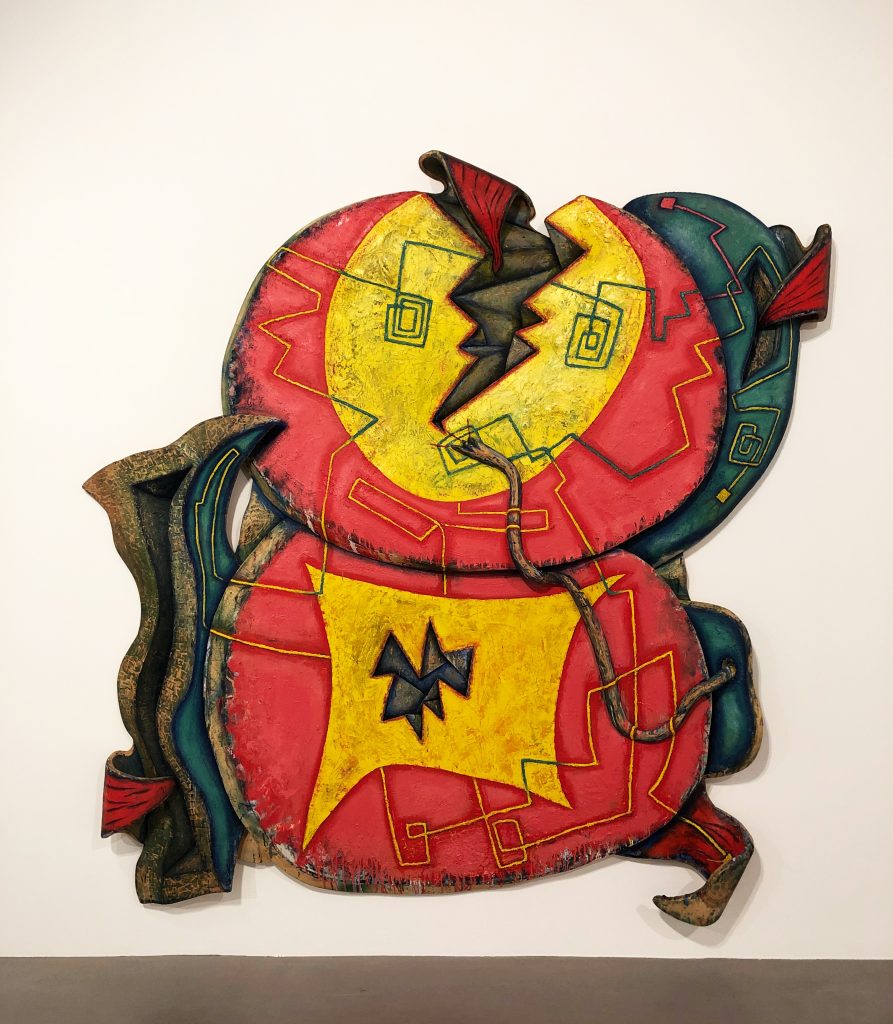 It’s the early 1970s in America. You’re contemplating launching yourself as a painter on the New York art scene. And for you, life is far from easy; there’s never been a less propitious time for practising your chosen art form. Caught between Clement Greenberg’s demand for a ‘pure opticality’ and the Minimalists’ insistence on the literalness of surface and support, it feels as if the working space for painting is being slowly squeezed out of existence. Worse still, as a woman, you’re having to contend with both the condescension of an overwhelmingly male art establishment, and the censure of a significant number of voices on your side of the gender divide, for whom picking up a brush is a treasonous act, a cowardly surrender to what critic Robert Storr described as ‘the stick with hairs on it’, the fetishistic emblem of painting’s phallocentric misogyny. In fact, it would probably be better for all concerned if you didn’t paint at all, thank you very much…

The eight paintings and sixteen large works on paper in Camden Arts Centre’s ‘Elizabeth Murray: Flying Bye’ show just how hard she pushed back, in her mature style, against all the prescriptions and prohibitions she had encountered in the formative years of her practice. If Greenberg had ruled that painting was everything that sculpture was not and vice versa, and the Minimalists had declared that both of these were literal stuff and nothing but, well then, Murray’s work would be a raucous collision of the two art forms that writhed and kicked out from the gallery wall into the viewer’s space, bristling with biomorphic influences, from comic strips and Disney cartoons to Dali, Gorky and Picasso, from Stuart Davis to Claes Oldenburg, from Frank Stella to Philip Guston; and if painting was deemed an ideologically suspect act of phallus-worship, then Murray would deliver a mocking rejoinder to all that pious disapproval through a sexualised iconography of cups, shoes, tables and chairs (the stuff of still-life) rendered huge and monstrous, morphing into endlessly suggestive crevices, apertures and openings, probed by string-like forms that slither over bulging, ballooning surfaces. 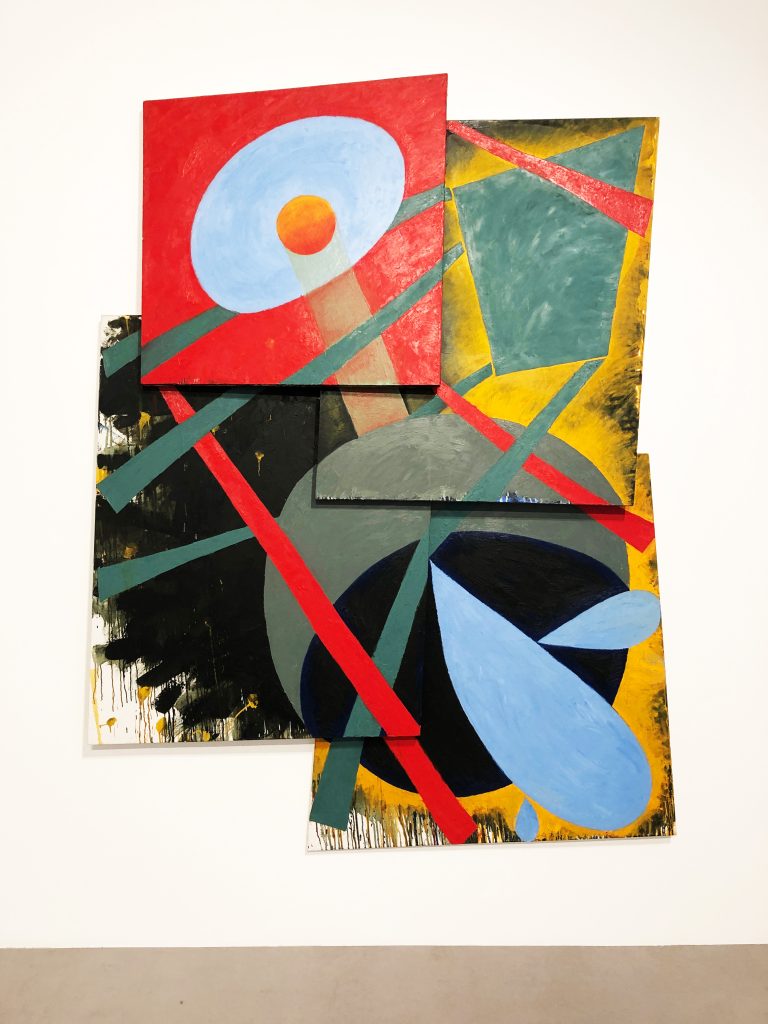 Three decades on from their making, how are Murray’s paintings- if you’ll excuse the pun- shaping up? They take command of the walls in the Camden Arts Centre’s main gallery, without a doubt; Murray wished for her work to appear ‘as if just escaped from the zoo’ and the massive, contorted wood and canvas constructions of both ‘Duck/Wabbit’ of 1982 and ‘Sandpaper Fate’ of 1993 do indeed have a coiled, creaturely feel beneath their coatings of roughly applied, pasty paint; the four black, stumpy ‘limbs’ that protrude from the surface of ‘War and Peace’ of 1987 seem poised to wrap themselves around anyone careless enough to wander too close.

For all their overwhelming animal presence, though, they feel provisional, as if they’re wrestling with questions that refuse to resolve themselves: such as, if the physical supports for these paintings are this elaborately tooled, this sinuously expressive, then what is left for the paint to do, other than tamely agree with, or embellish, the formal and iconographic statement already made in three dimensions? ‘Sandpaper Fate’ has a lightning-bolt-shaped gash at its top, and a jagged hole below it; both exist in real space, set into the wood support- and both are coated in illusionistic paint. Do the two modes- the real and the depicted- enhance each other, or cancel each other out? Does the pigment on the surface of ‘Duck/Wabbit’ do anything more than provide a coating, like coloured wax applied to a piece of funky reconditioned furniture? And is the exposed edge of drips and splatters at the work’s base a byproduct of a real struggle in paint, or simply an instance of what Ad Reinhardt dismissed as ‘Delirium Trimmings’? 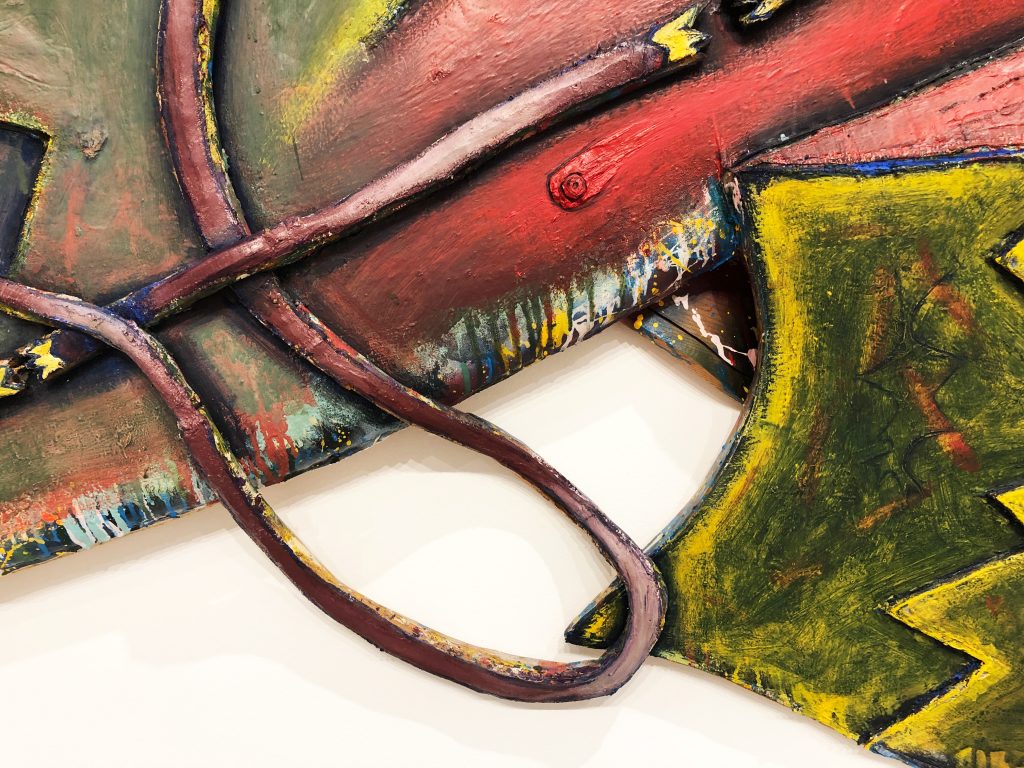 Instantloveland, for one, isn’t sure. Lesser paintings would have collapsed under the weight of these sorts of contradictions; and yet Murray’s don’t. See this show.