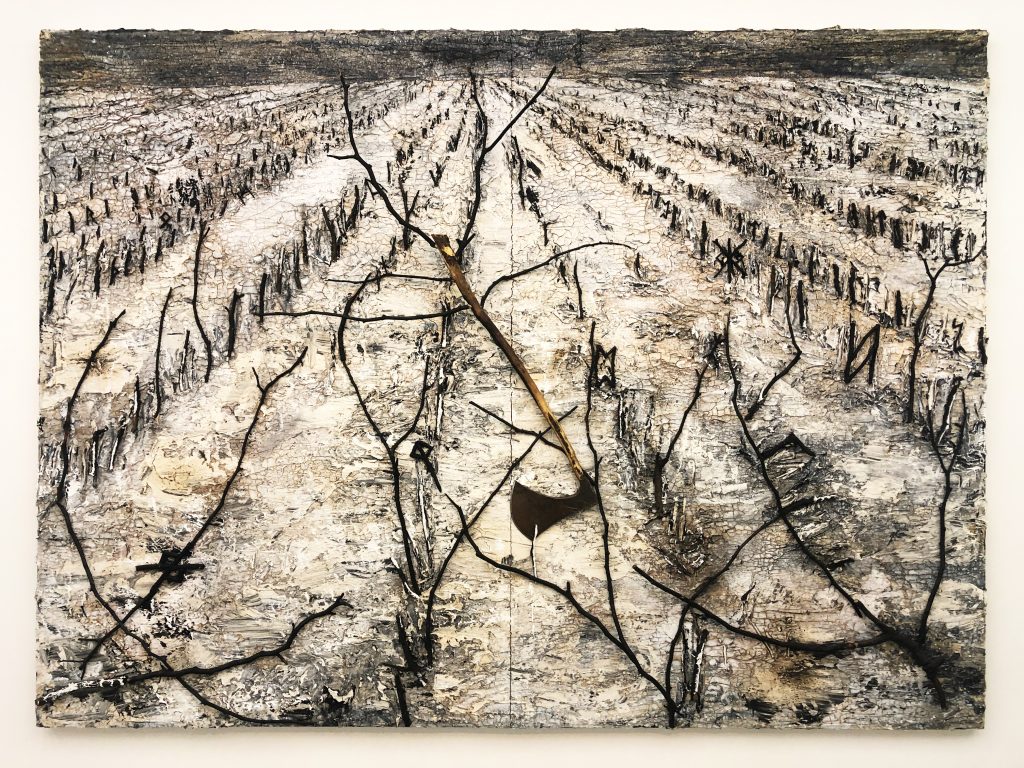 Speaking of the Red Army’s vast resources of manpower at the height of the Second World War, that well-known patron of the arts, Joseph Stalin, declared that ‘Quantity has a quality all its own’; and on the evidence of his current showing at White Cube, Anselm Kiefer, an artist famously fixated on the madness of the mid-twentieth century ever since he first posed for a Sieg Heil selfie back in 1969, appears to have taken Uncle Joe’s words very much to heart.

Kiefer’s not holding back on the quantity, that’s for sure: as well as sixteen gigantic canvasses, of which several probably qualify as the largest paintings ever made by anyone, anywhere, he’s thrown in a set of thirty floor-to-ceiling glazed steel vitrines for good measure, lining the entire length of White Cube’s cavernous central corridor with sepulchrally-lit displays of coiled cables. And in terms of the quality of experience on offer, there’s no doubt that hanging a canvas the size of a tennis court, caked edge-to-edge with paint, straw, and ashes, and festooned with charred branches and books, on a wall whose height rivals Tate’s Turbine Hall, is going to deliver something very different to that afforded by paintings employing human scale; this is art designed to overwhelm, to stupefy through the sheer outlandishness of its physical means. For his admirers (and judging by the level of footfall through White Cube’s vast spaces during the rainy lunch hour Instantloveland spent with the work, there’s a fair few of them out there) the prodigious scale and heaped-on materials of Kiefer’s paintings and assemblages offer an immersive encounter with the artist’s cosmology, which (reading from the gallery handout here) ‘knits classical myth with contemporary physics, exposing how the spiritual and scientific, the celestial and terrestrial, and the past and present are intractably conjoined.’ 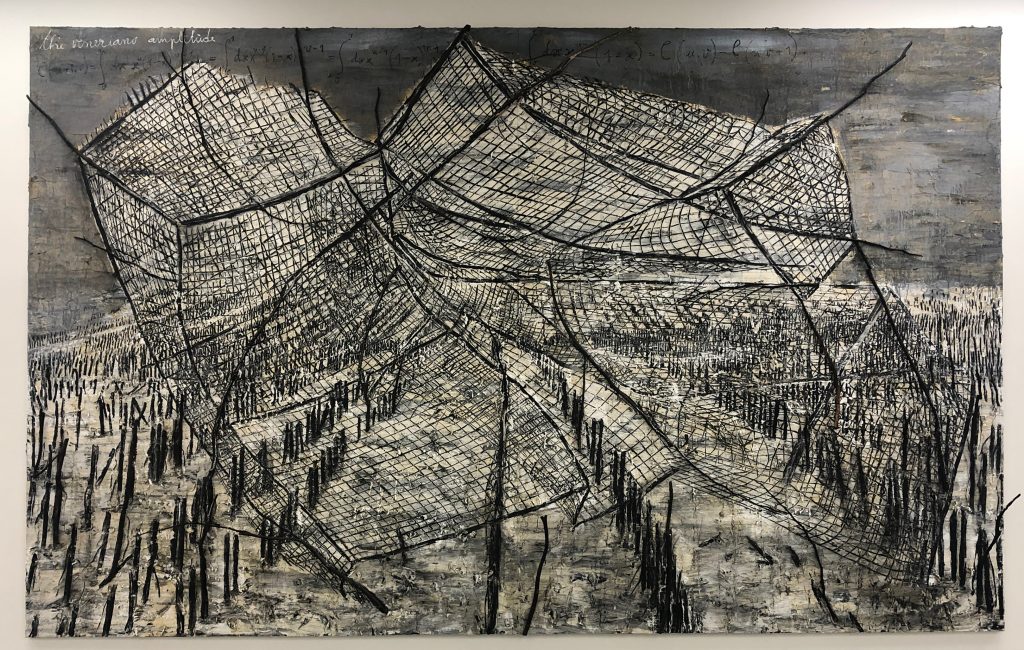 But hold on just a minute there. With the introduction of allusions to String Theory, Mathematics, and the Gordian Knot, Kiefer may well have added new subject-matter to his long list of preoccupations; and by making the biggest paintings anyone’s ever going to see indoors, he may well have taken the scale of his art-making into new territory; but Instantloveland couldn’t help but be struck by how closely these Kiefers follow the steps taken in previous Kiefers: big flatbed picture plane of churned grey paint, illustrational single-point perspective drawing, charred objects and plant matter stuck on top, scrawled charcoal writing.

The vitrines, with their accumulations of tangled electrical wiring atop blurry black and white photographs, are more or less interchangeable; the formulas, scrawled in oilstick on their glass fronts, are, we’re told, actual excerpts from ‘a mathematical model that attempts to articulate the known fundamental interactions of the universe and forms of matter’; but seen another way, they offer an unintended hint that there is, arguably, a great deal of the formulaic in what Kiefer is doing. The rows of black sticks receding to a high vanishing point above the collaged-on axe on the mottled grey and ochre field of ‘Der Gordische Knoten’ are intended to evoke the bleak, blasted fields of the Eastern Front; but they do nothing to allay the uneasy suspicion that Kiefer has spent the last four decades ploughing pretty much the same furrow.

Jonathan Jones, writing in the Guardian, has described him as ‘the greatest artist alive’; which, depending on one’s point of view, is either doing no more than giving Kiefer his due; or simply proving that the accolade ‘greatest art critic alive’ is still very much up for grabs… 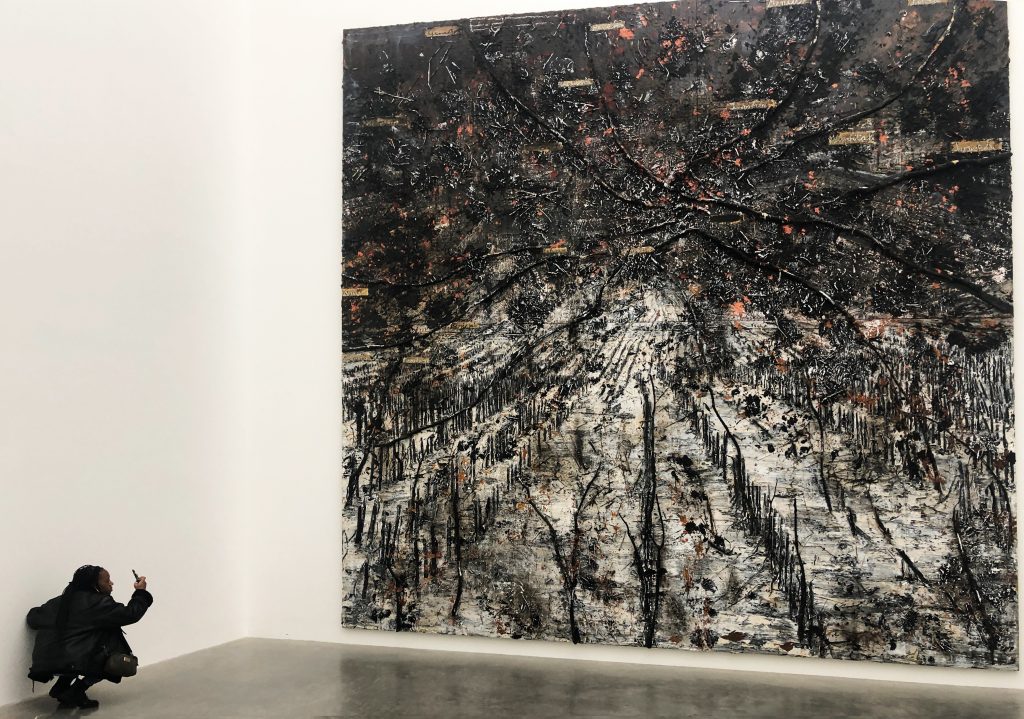